3 weeks out: Democrats lead but anything could happen

Dan Guild follows up on his earlier analysis of prospects for Democrats to win control of the U.S. House. -promoted by desmoinesdem

This is the current state of play in the House. At this writing, my projection shows the Democrats with a majority of 9 seats. The House polling has given added clarity, but the essential dynamic has not changed since February:

BUT. The volatility that exists can be seen in this chart. There are 31 seats where the lead is less than 5 points. If a swing as small as 3 points were to take place between now and election day in these seats, the battle for control for the House would essentially become a dead heat. As I have noted before here, the generic ballot polling has been off by about 3 points in every mid-term election since 1998. 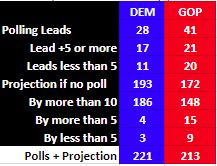 One thing that is apparent: this election has become nationalized. This is a chart of House polling since September. The Democrats lead in very few seats where Donald Trump’s approval rating is positive. If you remove three seats which are for various reasons being driven by local circumstances, you find about 55 percent of the difference in House polling is traceable to the difference in Trump’s approval rating. 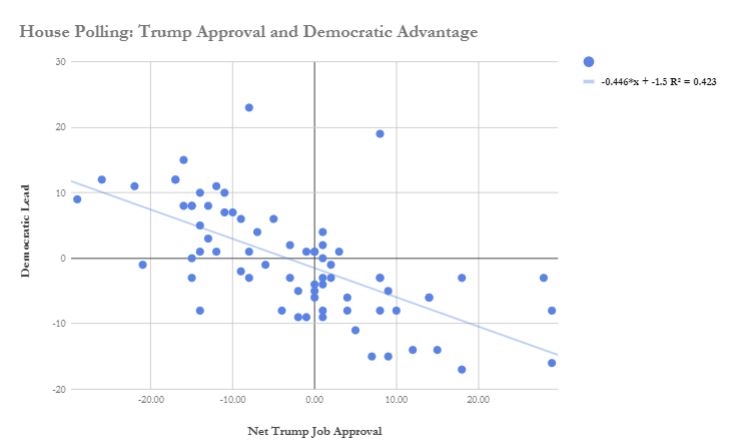 If 2018 has become almost entirely about Trump, it is important to note that different regions have had very different reactions to the Trump Presidency, and this is being seen across the county. In the Midwest, Democrats currently have solid leads for the Senate in the very places that saw the largest shift from Obama to Trump.

The current polling shows Trump’s approval is somewhat connected to Barack Obama’s 2012 margin. Certainly, this is the case in IA-01. This same dynamic is being replayed throughout the Midwest.

Whether it holds through election day will tell us a great deal about the durability of Trump’s gains in 2016 in the Midwest.