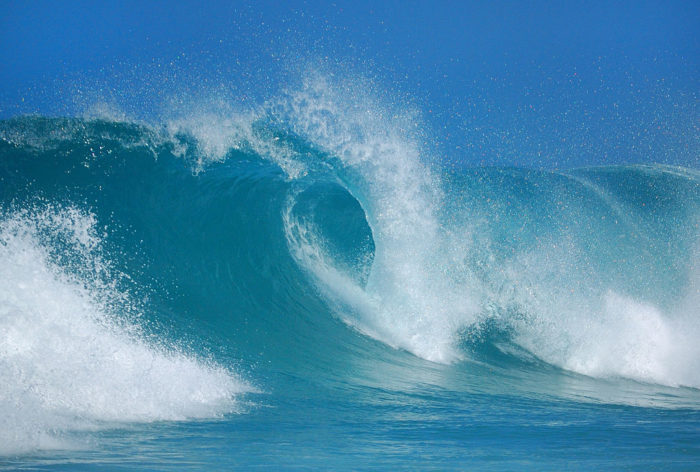 With Democratic House majority in sight, a larger wave may be coming

We are now 35 days from the 2018 election. For most of 2018 there has been speculation about the Democrats taking the House. But until the last month the data on individual districts has been sparse, and predictions have been based on things like the generic ballot which is itself subject to significant error.

What the chart shows is just how protected the Republicans are as a result of gerrymandering.

It is worth remembering that the Democrats have won a national election by more than 8 points only once since 1990. In fact in the GOP “waves” of 2010 and 2014 they won the House popular vote by less than 7 percent and yet won 247 and 242 seats respectively. The Democrats could easily win by a larger margin than the Republicans did in either 2010 and 2014 and yet still not win the House.

What do we know about these seats? Of the 66 seats included in the chart below, 31 have had polls from reliable organizations performed. This chart shows where those polls have occurred, and if they have not who currently holds the seat. 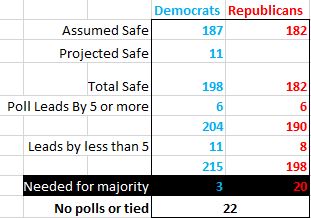 But this math shows as well how the Republicans could hold the House. Many of the seats with no polling are those with larger 2016 GOP margins. We know from the history of generic ballot polling that large swings occur frequently in the last five days.

I said earlier that a wave is possible. The reason for this is shown below. If you estimate the generic ballot based on the swing in the House polling, you find a Democratic advantage over 13. This would be a wave of historic proportions. Since World War II the Democrats have only won two elections by more than 13 points: 1974 and 1964. It would be so large that it would render may chart obsolete. 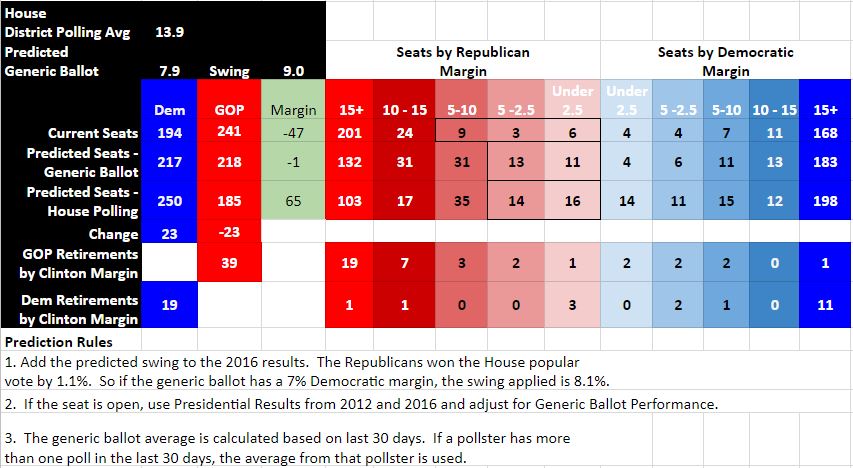 In many ways, the last 35 days of this campaign are as dramatic as any mid-term election in decades. The margin between taking and losing the House is thin. If the GOP holds the House and Senate they will likely complete a conservative revolution larger than any Republican President since World War II. Obamacare will likely be fully repealed, environmental protections rolled back and protections for minorities eliminated.

The stakes have rarely been higher. And the margin seldom thinner.