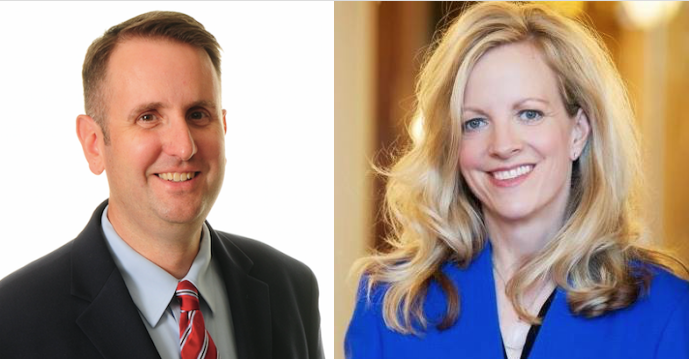 Mark Smith had served as minority leader since his predecessor Kevin McCarthy retired in 2013, but he declined to seek the position again after his party failed to win control of the House. Democrats picked up seven GOP-held seats but lost two of their own. Challenger Kayla Koether has asked for a recount in House district 55, where she trails GOP incumbent Michael Bergan by seven votes and the Winneshiek county auditor is refusing to count 31 disputed absentee ballots. If Koether prevails, Democrats would hold 47 of the 100 House seats. Otherwise, the Republican majority will shrink from 59-41 the past two years to 54-46 in January.

Prichard emerged as a consensus choice several days ago and was unopposed for minority leader this afternoon. First elected to the legislature in 2013, he easily won second and third terms in 2014 and 2016, even as the top of the Republican ticket carried the rural and small-town areas he represents. (House district 52 covers Chickasaw and Floyd counties, along with part of Cerro Gordo County.) Republicans did not field a candidate in Prichard's district this year.

House Democrats chose Jo Oldson as minority whip by acclamation. The caucus did not have a whip during the past eight years, when Republicans have controlled the chamber. Oldson was first elected in 2002 and represents House district 41, covering parts of the west and south sides of Des Moines.

Following competitive elections, four representatives were selected as assistant Democratic leaders: Wes Breckenridge, John Forbes, Brian Meyer, and Sharon Steckman. Only Meyer was one of the assistant leaders during the past two years. He has represented House district 33 (parts of southeast Des Moines) since 2013. Forbes has represented House district 40 (much of Urbandale) since 2013. Breckenridge was first elected to House district 29, covering most of Jasper County, in 2016. Steckman was first elected in 2008 and represents House district 53, covering part of Cerro Gordo County, including Mason City. This year, Forbes and Steckman were unopposed, while Meyer and Breckenridge easily defeated their GOP challengers.

The November election was a disaster for Democrats in the Iowa Senate. Although Jackie Smith defeated a GOP incumbent in Senate district 7, covering much of Sioux City, two-term Senator Tod Bowman lost his race in Senate district 29 (Jackson County and Dubuque County outside the city of Dubuque). Republicans picked up two Democratic-held open seats as well: Senate district 15 (most of Jasper County and eastern Polk County) and Senate district 49 (Clinton County and part of Scott County). That brought the caucus down from twenty to eighteen of the 50 seats.

Nevertheless, last weekend's leadership elections were a no-drama affair. Janet Petersen will remain minority leader, a position she has held since October 2017. First elected to the Senate in 2012 after serving for twelve years in the Iowa House, she represents Senate district 18, covering parts of northern and eastern Des Moines.

Having survived her toughest re-election race, Amanda Ragan will remain minority whip. She narrowly won a fifth term in Senate district 27, which includes Mason City and most of Cerro Gordo County as well as Franklin County and most of Butler County.

Des Moines, Iowa – State Representative Todd Prichard of Charles City was elected today to serve as the new leader of Iowa House Democrats. Rep. Jo Oldson of Des Moines was elected as the Democratic Whip and four other lawmakers were elected as Assistant Democratic Leaders.

“House Democrats are ready to get to work in January to improve the lives of everyday Iowans. We know that Iowans are tired of the divisive, partisan politics that defines our system today but it should not be that way. We believe it’s time to put politics aside, listen to Iowans, and do what is best for people again,” said Prichard.

Prichard currently runs his own law practice in Charles City and has also served as the Assistant Floyd County Attorney. In addition to running his own small business, he is a volunteer and active member of his community. Todd’s wife, Ann, is a teacher in the Charles City School District and they have three children.

“We made big gains in the Iowa House this year and for the first time in Iowa history, women make up a majority of a caucus in the Iowa Legislature. I’m excited to help lead House Democrats in 2019 and get the Legislature back to focusing on the basics like education and affordable health care for Iowans,” said Rep. Oldson, who will be serving her 9th term in the Iowa House.

The 2019 Legislative Session starts on Monday, January 14. For more information and full bios for Rep. Prichard and all House Democrats, log on to www.iowahouse.org.

“I am honored to have the continued support of my fellow Democratic Senators.”

“For the past two years, the Republican-led Senate pushed through damaging policies that helped out-of-state companies and special interests instead of hard-working Iowa families.
“Senate Democrats will continue standing up for Iowans. We believe every Iowan – regardless of whether they live in rural areas, small towns, urban or suburban parts of our state ---- deserves access to affordable health care, strong public schools, and the chance to get ahead in life.
“We will work with the Governor and Republican legislators on issues where we can find common ground over the next two years. But, if we continue to see Republicans push an agenda that hurts the health care, education, and financial security of working Iowans, we will be fierce in our opposition.”

Petersen is in her second term in the Iowa Senate after serving six terms in the Iowa House. She represents Senate District 18 in northwest Des Moines.

In 2008, Petersen founded a nonprofit organization with four other central Iowa women called Healthy Birth Day. The organization, best known for its Count the Kicks campaign, is devoted to preventing stillbirths and improving birth outcomes.

Petersen and her husband Brian Pattinson have three children.