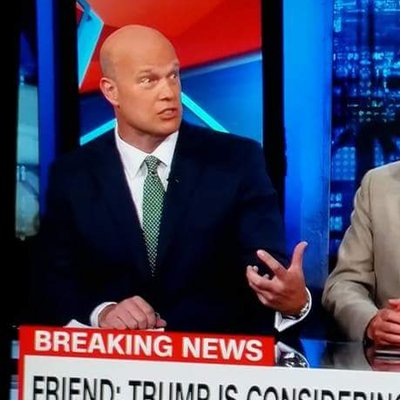 Brittany Shammas of the Miami New Times was first to report on November 7 that Whitaker was a board member for “a Miami-based invention-marketing company the Federal Trade Commission shut down last year after calling it a scam.” Others followed up with more details on how Whitaker sent messages threatening legal consequences against customers defrauded by World Patent Marketing.

Ryan Foley and David Pitt reported for the Associated Press on November 13 that Whitaker “walked away from a taxpayer-subsidized apartment-rehabilitation project in Iowa after years of cost overruns, delays and other problems.”

Whitaker was well compensated as leader of the 501(c)3 organization Foundation for Accountability and Civic Trust (FACT), which appears to have abused its non-profit status to engage in political activities benefiting Republicans. According to a November 20 report by Robert O’Harrow Jr., Shawn Boburg, and Aaron C. Davis of the Washington Post, that group paid Whitaker more than $1.2 million between 2014 and 2017. Almost all of FACT’s funding came from conservative dark money sources.

Whitaker has revised his personal financial disclosure forms five times during the past two weeks.

Executive branch officials are generally prohibited by a federal law, the Hatch Act, from knowingly soliciting or accepting campaign donations.

Whitaker finished fourth out of five candidates in the 2014 GOP primary, and I never would have thought to check his campaign’s Federal Election Commission reports for recent activity. But there it is in the first quarter filing: three donations on January 29, 2018 ($2,600 from Michael Richards, $2,600 from Cameron Sutton, and $1,000 from Leon Shearer), and one on February 2 ($2,600 from Gary Kirke).

Kirke, Richards, and Sutton are “usual suspect” high-dollar GOP donors, who often support candidates as part of a group including Bruce Rastetter. Kirke and Richards are also partners in the casino business, and Whitaker used to lobby for Kirke’s company. Shearer is not a frequent donor to state-level candidates but has been a regular giver to U.S. Representative David Young over the years and is treasurer of Young’s leadership PAC, the Bulldog Victory Fund.

There is no chance four well-connected Republicans independently decided within days of each other to write a check to a Senate campaign that’s been defunct for nearly four years. Who asked them to give to Whitaker’s political committee, and why?

To my knowledge, none of the donors has explained the contributions to inquiring journalists. Reached by phone on November 21, Shearer told me, “I’m not going to answer any questions. I don’t really trust the press anymore, and I’m not going to comment at all about that contribution.”

Vogel and Haberman noted that Whitaker’s campaign treasurer is Bill Gustoff, his former law partner and a board member of FACT, as well as a member of the Republican Party of Iowa’s State Central Committee. Gustoff should be familiar with the Hatch Act. Earlier this year, he charged in an ethics complaint that Democratic secretary of state candidate Jim Mowrer had violated an obscure provision of Iowa election law.

Another oddity: why did Whitaker’s Senate campaign pay $500 in rent to the Whitaker, Hagenow, and Gustoff law firm on February 2 of this year?

Just one more, from the Washington Post story by O’Harrow Jr., Boburg, and Davis:

Contrary to its claims in news releases and a tax filing, the group [FACT] was created under a different name two years before Whitaker’s arrival, according to incorporation and IRS records. At least two of the organizers were involved in another conservative charity using the same address. […]

Whitaker’s 2017 pay from the charity — more than $500,000 for the first nine months, or half the charity’s receipts for the year, according to tax filings — and the group’s earlier, dormant incarnation have not been previously reported by media. […]

The statement [from the non-profit] said that FACT “properly notified the IRS of its name change.”

“It is not unusual for a corporation, not for profit or profit, to refine its name and purpose, and since its inception FACT’s purpose has always been consistent with non-profit law and all appropriate notifications were made,” the statement said.

The spokesman did not respond to questions about whether the group told the IRS about its change in mission, as is required by IRS rules.

Former Justice Department spokesperson Matthew Miller commented on Twitter, “Everything about Whitaker’s finances – the five amendments to his disclosure forms right before release, the FACT fundraising while he was at DOJ, FACT’s tax status & payments to him – stinks to high heaven. If people keep pulling the string, they’re likely to find much more.”

In this target-rich environment, numerous reporters are chasing down Whitaker leads. He may come to regret agreeing to this month’s big promotion.

UPDATE: Forgot to mention that Whitaker did not cooperate with a Federal Trade Commission investigation into the fraudulent company.

In their investigation, FTC staff had sought to learn more about the role played by the company’s advisory board members, including Whitaker, a former U.S. attorney whose role was prominently highlighted by the company in news releases and marketing materials. […]

Whitaker has told officials he served in a limited capacity as an outside legal adviser to the company and provided occasional advice when asked but that he was not part of the day-to-day operations, according to a Justice Department official, who spoke on the condition of anonymity because of the sensitivity of the case.

When the FTC subpoenaed Whitaker for his records related to the company in October 2017, he failed to provide any information, telling investigators that he was busy at that time moving from Iowa to Washington for a new job, according to people with knowledge of the case.

Austin Evers, the executive director of the watchdog organization American Oversight, told CNN his group submitted a complaint to the Office of Special Counsel that argued Whitaker may have violated the Hatch Act, which prohibits federal employees from accepting political contributions.

A spokesperson for the Office of Special Counsel confirmed receipt of the complaint and said a case file on the matter has been opened. The office can investigate Hatch Act complaints and recommend discipline but does not directly take disciplinary action. The office has no connection to the Justice Department special counsel’s office that is overseeing Russian interference in the 2016 US election. […]

William Gustoff, a former law partner of Whitaker’s who served as treasurer for Whitaker’s Senate campaign, told CNN that neither he nor Whitaker had solicited the donations made to the campaign earlier this year.

Gustoff said the campaign committee remained open because of remaining debt. FEC records show that Whitaker loaned his campaign $50,000 in 2013, and the committee still owes about $49,000.

Paul Campos of the Lawyers, Guns, and Money blog searched the Lexis news data base for clues about Whitaker’s work for FACT during 2016, when he earned $402,000 as the non-profit’s leader and sole employee.

(1) FACT and Whitaker did very little advocacy during the entire election year. Whitaker and FACT are referenced 36 separate times in Lexis News. For the sake of comparison, I’m referenced 357 times over the same time, which if I understand the principles of free market capitalism correctly means that George Soros owes me slightly more than four million dollars for 2016 alone.

(2) 34 of these 36 references involve criticism of Democrats. 17 of those 34 criticisms are of Hillary Clinton. Many of those criticisms are of — wait for it — the Clinton Foundation, for supposedly failing to adhere to the legal standards controlling the advocacy work of non-profit entities.