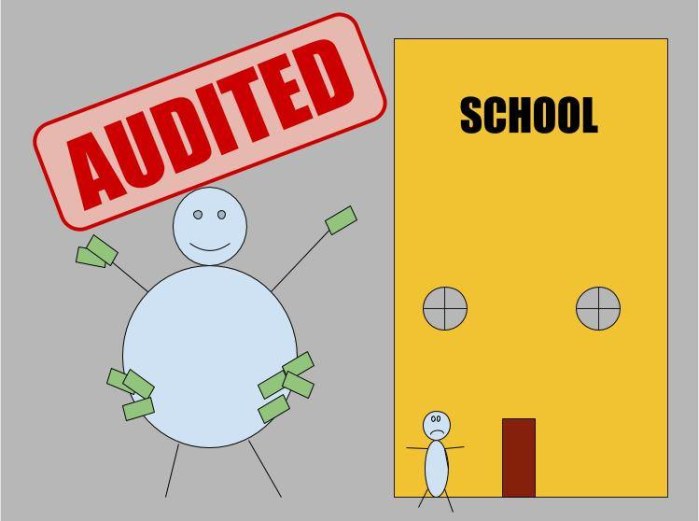 Tyler Higgs is an activist in Clive and a former candidate for Waukee school board. -promoted by desmoinesdem

The audit report of Waukee School District has been released, exposing more incidents of corrupt and/or inept management at the highest levels of the district. The full report is enclosed below, along with a summary of key findings.

I previously discussed some of these issues, but for those unfamiliar with the ongoing saga, here's a refresher:

WHAT WE KNEW BEFORE THE AUDIT

2. Despite an investigation report stating there was "probable cause to support arrest" and "Rose is committing illegal acts," the Dallas County attorney and a Waukee police sergeant declined to press charges.

3. The school board "punished" Rose by telling him he had to donate money to his son's hockey team (to make up for the money donated by vendors), but then gave him a 6 percent raise to more than cover the cost.

4. The school board snubbed teachers, refusing to extend contracts as the Iowa legislature prepared to gut collective bargaining rights, even though teachers agreed to a zero percent increase in pay.

5. Whistleblower Terry Welker's position was cut, supposedly to save money. However, the move may have been an act of retaliation. Other whistleblowers, Amy Patters and Nick Bavas, allege retaliation caused them to resign. Of note, a lawsuit filed by Jay Oxenford in 2014 (before these events) also alleged retaliation for blowing the whistle on the misdeeds of Eric Rose, but that suit was dismissed.

7. State legislators called for an audit of school finances and an audit began in January 2018.

8. The district's chief financial officer (who was named in a wrongful termination suit) announced she is leaving the district to go work for one of the districts' vendors.

9. The school board voted to give Rose another 2 percent raise. Lori Lyon was the only dissenting vote.

10. Records I have obtained from the district through requests indicate Eric Rose has spent district funds staying at Kalahari Resort in Wisconsin Dells, spending a small fortune on Mister Car Wash (Once twice in one day), expenses at sports bars, and frequent trips to Best Buy.

11. Multiple concerns with student safety, mental health, and bullying were raised in a Waukee Parent Discussion group, and the district settled a $150,000 bullying lawsuit.

12. A position was posted for "Executive Director of Personnel" with duties similar to that of the Human Resources Director position that was eliminated, ostensibly to "save cost." Originally, the job required a juris doctorate, and the posting was only open for four days, but these restrictions were later dropped.

13. More than ten months after the start of the audit investigation, the audit report of Waukee schools was released, citing "The lack of appropriate oversight and the failure to ensure implementation of adequate internal controls in these areas enabled a dysfunctional work environment with a lack of accountability and trust."

WHAT'S IN THE AUDIT REPORT

The audit report itself confirms many of the details above that we already knew from the investigation report but elaborates key details and puts additional pressure on Waukee School Board members to either "step up" or "step down". Here's the full document:

Here are key numbers and details:

According to the report, fifteen employees were interviewed by the districts' internal investigators. Of those, ten are no longer employed by the district, and of the five remaining, one is Eric Rose himself.

It also indicates that the money Rose paid back to his son's hockey team may have qualified him for a charitable tax deduction. The report lists concerns about the district access cards, indicating that Rose used multiple cards and allowed unauthorized family members to use the cards to gain access to restricted school property. Multiple unauthorized copies of access cards could present a security risk to students and school personnel.

The report claims that school board president Susan Bunz authorized payments of school funds to Meals for the Heartland, an organization for which she was Executive Director. That committal of funds was also signed prior to board approval.

The audit report, which cites a multitude of board policies and laws that appear to have been violated, has been filed with the City of Waukee Police Department, the Division of Criminal Investigation, The Dallas County Attorney's Office, and the Attorney General's Office.

Here's what you can do to demand accountability:

2. Attend the next school board meeting on Monday, December 10 at 7:00 PM. There will be time to speak if you would like, but you can also attend just to support others. Wearing red for public education is a great way to show solidarity.

3. Write personal letters. Ask what the board members and superintendent will do to make the situation better. If you don't like their answer, demand they resign. Here is their contact information.

4. Vote them out. The next school board election is November 5, 2019. Put the date on your calendar now. The registration window for Candidates is August 26, 2019 - September 19, 2019 for anyone considering a run. The following three incumbents will up for election next year, should they choose to run again:

EDITOR'S NOTE: Superintendent Cindi McDonald released the following statement (with a link to the audit report) on December 6.

After reviewing the State Auditor's report, our focus remains on doing what we do best and that is educating our students at one of the highest level in the state, supporting our teachers, staff and principals, with a positive learning and growing environment. We acknowledge some of the findings noted in the report fail to reflect the high expectations we set for our district leaders. The audit findings confirm policy and procedural changes we have implemented or will be implementing, to strengthen our administrative and operations controls, protocols, policies and procedures. As a district, we continue to look for ways to improve, foster positive work environments, collaborate and create opportunities for our staff to continue to learn.

The audit report provides an opportunity for the district to consider the detailed findings and the recommended control procedures. The findings reported in the audit confirm policy and procedural changes implemented by the district since July 1, when the current chief financial officer assumed her role. Additional changes will occur as appropriate, and action plans will be developed to address the other recommendations in the audit report.

The Board will engage in dialogue on Monday, December 10 at the Board meeting regarding recommended control procedures on page 31 of the audit report.

The members of the Waukee School Board believe there are inaccuracies in what the audit report states as “improper disbursements and disbursements which were not in the best interest of taxpayers.” We are currently gathering the supporting documents to refute how these purchases were attributed by the Auditor’s Office. We take our fiduciary responsibility seriously and we will work with the administration to improve processes that create greater transparency. Through this audit report, the Waukee School Board’s oversight of the district has been questioned. Recommendations for improvement were given and we as a Board intend to follow through on those recommendations, some of which have already been implemented.

A full listing of the recommendations and the status of policy or procedure changes will be available on Monday, December 10 at the Board Meeting (7:00 p.m. in Conference Room 102A, 560 SE University Avenue).