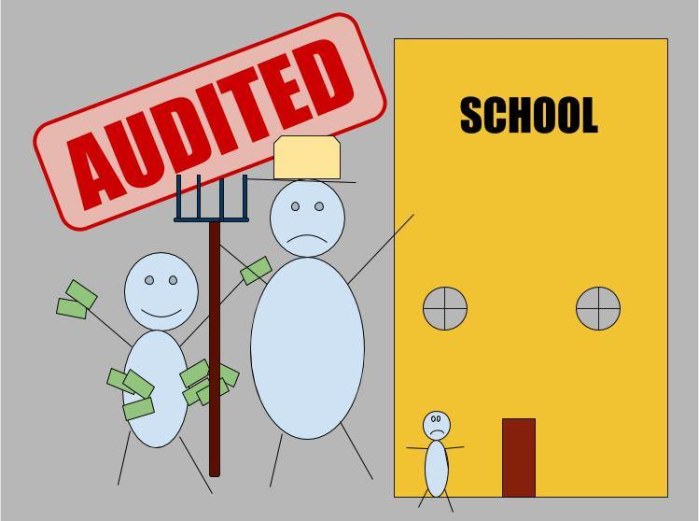 Tyler Higgs reflects on the Waukee school board’s latest meeting, four days after a state audit identified some $130,000 in disbursements that were either improper or “not in the best interests of taxpayers.” -promoted by desmoinesdem

Passion flared at the Waukee School Board meeting last night in what was the latest display of outrage. Civil uprisings seem to be par for the course these days, from the “Indivisible” movement of the last two years to the “Tea Party” before that. These uprisings are an American tradition going back to the civil rights movement and the Declaration of Independence. Heck, angry constituents demanding to be heard is practically an American pastime. It’s what people do in a democracy when they feel they have no other way of being heard. When politicians ignore the People, open dialogue turns into pitchforks.

Our elected officials are flawed human beings — some more than others. They make mistakes, sometimes big ones, and it’s our job to call them out — to demand them to be “more perfect”. When they mess up, as we all do, elected officials sometimes look at the high standards we have for them and think, “I can’t own up to this. They’ll bring out the pitchforks.” It’s this thought process, I think, that creates a self-fulfilling prophecy. By denying the problem or doubling down on a cover-up, they make it worse.

The American people want their government to work for them. When asked, they’re willing to forgive minor and sometimes major mistakes. People are less concerned about that meal at Perkins or some guy borrowing a snow-blower than they are about firing employees in an attempt to hide the problem. When politicians refuse to take responsibility, the public feels ignored, and then they bring the pitchforks.

Anyone reading this probably knows I get fired up. I’m passionate when it comes to advocating for what I think is right: children’s mental health, giving teachers the respect they deserve and a safe working environment, truth, responsibility, and advocating for those who cannot advocate for themselves. To my credit, sometimes, that’s what the moment calls for. To my detriment, sometimes I go too far and get over-zealous. I make mistakes. I don’t like being called out on them, but I know if I take my lumps and try to make it right, I make myself a better person.

That’s all the public wants in Waukee. The board President should have read this statement, “We’re sorry. Mistakes were made, and we failed to do our job to fix them. We’re going to do what we can to fix them now, but understand that employment matters are confidential.” Instead, what we got was defensiveness and denial.

When I ran for school board last year, I stood on stage in a public forum, and I said in all honesty that there were fourteen good candidates running for school board. In a mistake on my part, I found myself questioning that recently, and I don’t like that. That’s going too far. In spite of my passionate rhetoric, I still believe that these board members can continue to do good things for our district. But I need them to prove me right.

I hope they step up, not step down. But it should be one or the other.

Editor’s note: Someone really did bring a pitchfork to the packed room where the school board meeting took place. And Lori Lyon, the only school board member to vote against giving a raise to the Waukee school district’s chief operating officer Eric Rose, was also the only member to face the public before last night’s meeting. Photos by Tyler Higgs. 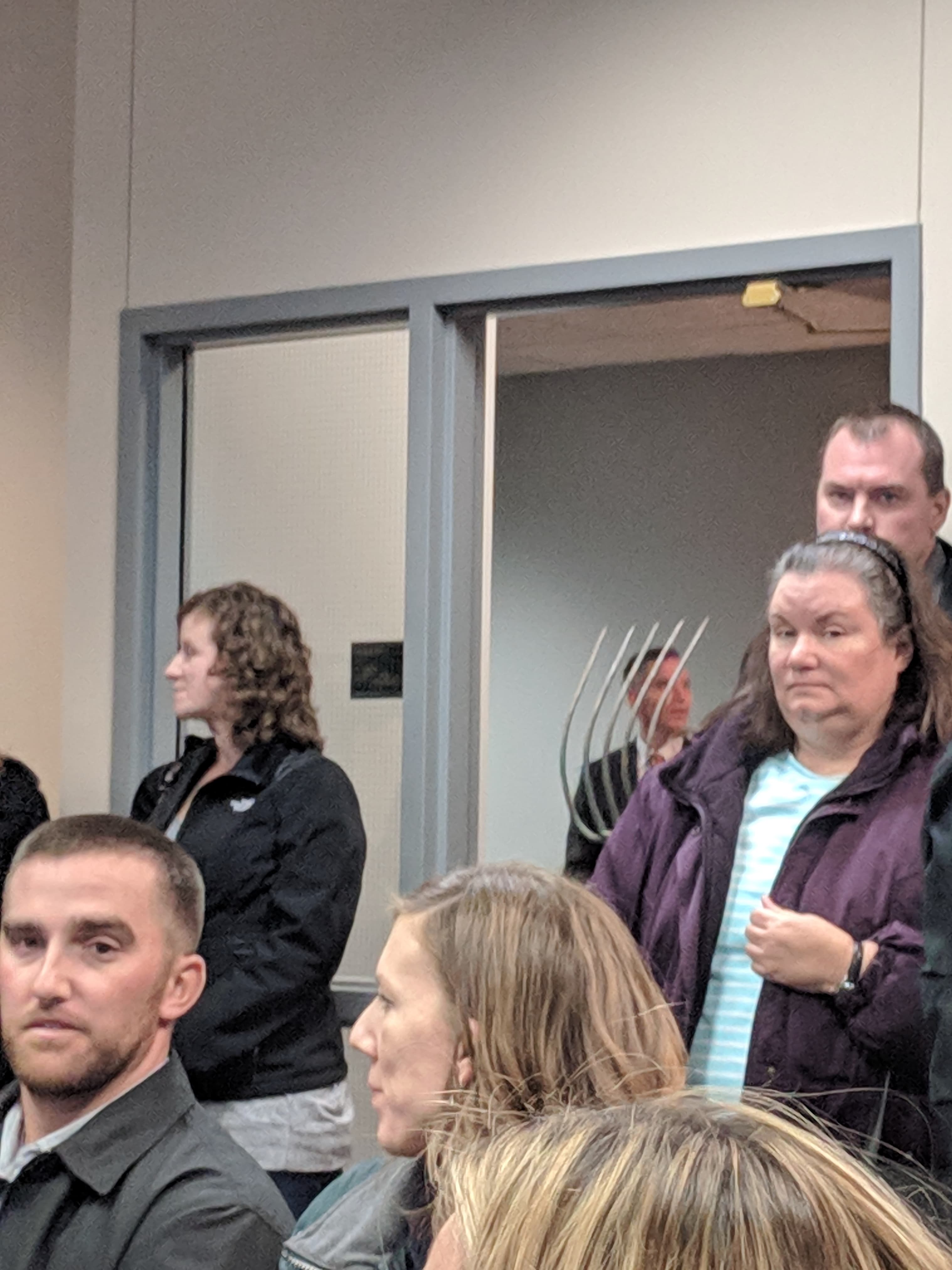 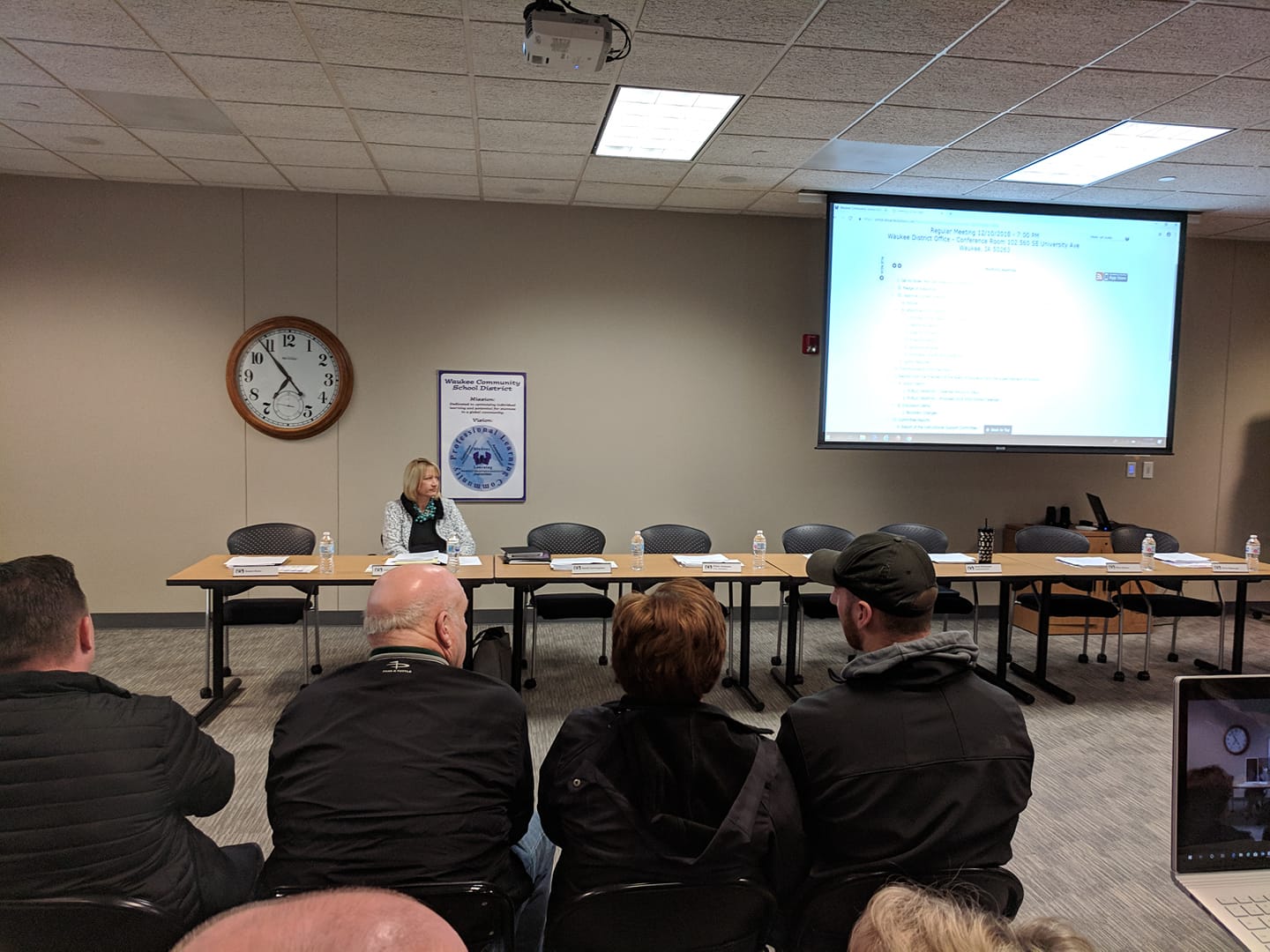