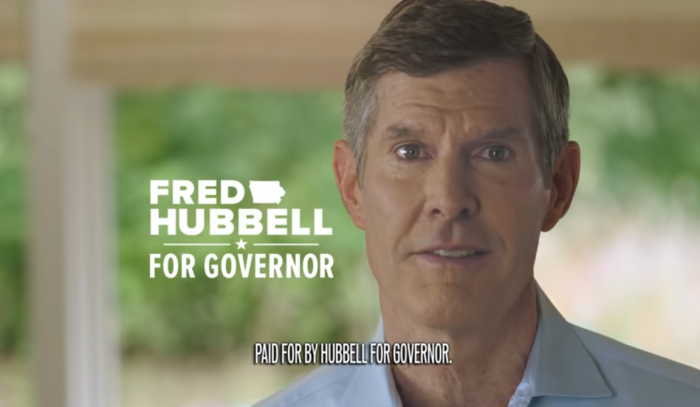 Joe Gorton: "Fred Hubbell’s campaign for governor is the most recent example of a candidacy that failed to couple a strong emotional tone to strong content." -promoted by Laura Belin

For the third consecutive time, Iowa Democrats are licking our wounds after a gubernatorial campaign loss. Not surprisingly, there are many competing explanations for what went wrong. Within those explanations one factor is largely ignored: dull campaign rhetoric.

Despite this reality, substance dominates the campaign messages of Iowa Democratic candidates. For Democrats to win statewide races, our candidates will have to use sharper rhetoric to drive their points home.

Fred Hubbell’s campaign for governor is the most recent example of a candidacy that failed to couple a strong emotional tone to strong content. It is one reason we lost a statewide race Democrats should have won.

The content of Hubbell’s message was right on target. He focused on his leadership record, the Medicaid debacle, education and Iowa’s mental health crisis. In addition, he frequently criticized Reynolds positions on these issues. Unfortunately, the campaign failed to drive the substance of his campaign with highly charged emotional rhetoric.

Those who doubt the importance of sharp campaign rhetoric would be well served to examine the winning gubernatorial campaign of Wisconsin Democrat Tony Evers.

Early in the election cycle, few experts gave Evers, a former state school superintendent, much chance of defeating the heavily funded two-term incumbent Scott Walker. The Wisconsin Democrat outperformed those expectations because his media team understood how to use sharp emotional rhetoric to inflict serious damage to his opponent’s campaign.

Evers’ media consultants knew that to achieve victory, the substance of their message required highly charged rhetoric aimed directly at their powerful opponent. From the very beginning, a key element in Evers’ message was that Walker was a politician of selfish and unsavory ambition. Through television commercials and statements delivered on the campaign trail, the Evers team relentlessly reinforced their message that Walker was liar who cared more about himself and his big money donors than he did about Wisconsin families. Here are some examples:

"Scott Walker and the Special Interests":

"Tony Evers will always put the safety of our children first":

Beyond the Midwest is another excellent example of how emotionally intense rhetoric helped a major statewide Democratic candidate outperform expectations. Representative Beto O’Rourke’s U.S. Senate campaign in Texas was a textbook example of how to use television, social media, debates and the campaign trail to fearlessly attack a wealthy and powerful statewide Republican incumbent. Here is an October ad O’Rourke used to blast Senator Ted Cruz for “selling fear and paranoia.”

As someone who ran two statewide campaigns in Texas, I regard O’Rourke’s 2.6 percent deficit against an incumbent Republican U.S. senator as a near miracle. The outcome is more remarkable when one recalls Beto’s strong stance on behalf of NFL players who took a knee during the national anthem. In Texas, that position is tantamount to embracing a statue of Karl Marx. Unlike Iowa’s nominee for governor, Beto put the fear of God into his opponent’s campaign.

In contrast to the Evers and O'Rourke campaigns, Iowa’s Democratic statewide candidates seem gripped by a fear that going negative will turn voters off. That assessment requires a simplistic and overwrought misunderstanding of so called negative campaigning.

I'm frequently amazed by how many political activists do not understand that negative campaign messages exist on a continuum. The intensity of emotional rhetoric used to attack a political opponent varies from very weak (barely annoys an opponent, easily ignored) to overly aggressive (so harsh as to backfire).

One reason for the outcomes achieved by Evers and Beto is that both campaigns hit the sweet spot on that continuum. Both put their opponents on the defensive with unapologetically aggressive messages that were not crass or uncivil. By contrast, Iowa’s statewide Democratic candidates are usually at the weaker end of this continuum. The Hubbell campaign exemplified this problem.

It’s widely agreed Hubbell’s two Medicaid ads, (“Tammy” and “Tucker”) were his campaign’s most effective TV spots. [Editor's note: those videos are no longer available online, but you can read the transcripts at the end of this post.]

To be sure, these were attack ads. However, in both instances the emotional content was too weak to move voter sentiment against the incumbent. Unlike Evers' ads which evoked voters' anger and mistrust toward Walker, the predominant emotion elicited by Hubbell’s Medicaid advertisements was sadness. I’ve never met a political media consultant who believes relying on voters’ sadness is an effective way to win a campaign.

It’s understandable why neophyte statewide campaigns are hesitant to deliver intense rhetorical messaging. After all, some research shows negative messaging can be a risky tactic. However, most of that research does not control for emotional intensity of the rhetoric (i.e, weak vs strong), political context, campaign resources, quality of polling data, and other important variables. Political scientists notwithstanding, the most successful campaign consultants know it can be foolish to not deploy emotionally charged rhetoric against one’s opponent.

Though they were not statewide races, the victories of Democratic Congressional candidates Abby Finkenauer and Cindy Axne are additional cases in point. Both used highly charged emotional rhetoric against their incumbent Republican opponents. While this was not the only reason for their victories, both candidates could have easily lost if their messaging had been driven by the emotional tone used by the Hubbell campaign.

Everyone knew that to achieve a general election victory, Hubbell needed to win a significant percent of rural votes. Unfortunately, the urgency of this objective failed to find its way into his campaign’s messaging and rhetoric. The campaign would have been better served by talking and running tv ads about the real dangers facing rural Iowans. The campaign could have highlighted the loss of support for rural schools, health care and local businesses. They could have placed emotionally compelling ads showing rural voters (preferably Republicans) angry at Reynolds for harming their children’s futures and reducing access to health care.

There were other lost opportunities to hurt the Reynolds campaign at an emotional level. Recent studies and media reports have presented data showing relatively high rates of suicide among farmers. A skilled political media consultant could have used those tragedies to hit Reynolds for being out of touch with the life and death struggles of many rural Iowans.

How hard would it have been to attack Reynolds for not standing up to protect Iowa’s family farmers from China’s retaliatory tariffs? Skilled media consultants could have easily created hard hitting ads in all or some of these areas. The Hubbell ads should have been similar to Evers’ messaging about Scott Walker (an overly ambitious political more concerned about certain donors than Iowa families). I’m willing to bet a sum of money the Reynolds’ media people expected strong attacks and are happy they did not happen.

Hindsight is 20/20. But there is nothing in this column I did not assert in the run up to the general election. By early September, when there were no serious attacks from the Hubbell campaign, I began to fear the worst. Still, I contributed to the campaign and like hundreds of other Democrats did what I could to help.

But I was certain then, as I am now, that Hubbell’s campaign message needed highly charged rhetoric to elicit anger and mistrust toward his opponent. Let’s hope this lesson will not be lost on Democrats who run for statewide offices in 2020.

Joe Gorton is an associate professor at UNI where he served for five years as president of the faculty union. Much of his post graduate work focuses on public policy, community organizing and political sociology. He has been active in union, community and political organizing for 40 years.

Tammy: “The Medicaid privatization is a life or death issue for Iowa’s children.”

“What means a lot to my family and I is that Fred Hubbell has the courage to undo Medicaid privatization, to spend money on children’s mental health. Fred’s the only one who is able to actually tell me how to solve the problems.”

Tucker: “Three days before Christmas, I get an email from my health care agency saying, “We are not going to be able to provide you any more services. Happy Holidays.”

I was forced to move, and when you’re a C5 quadriplegic, it’s more or less a life and death situation.

That was really when I got scared.

I do not believe that Medicaid privatization is saving us any money. Health care situations are getting worse.

And Governor Reynolds, is saying it’s getting better? People are dying.”