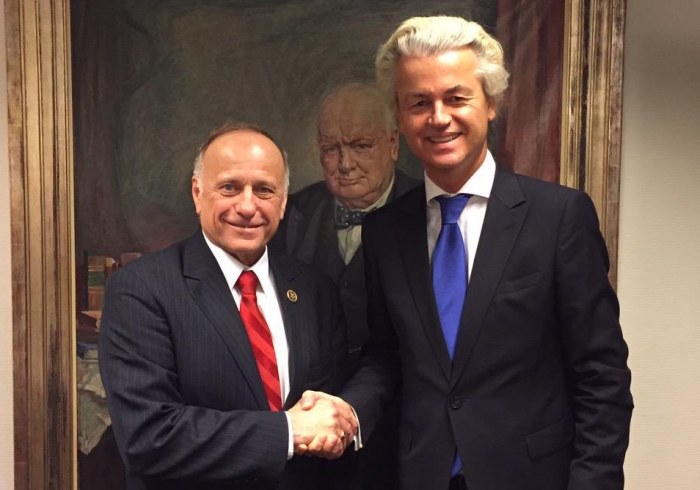 There are two main reasons Iowa makes the national political news: (1) The Iowa caucuses, and (2) Congressman Steve King (R, late-1800s). The caucuses operate on a regular, predictable, four-year cycle, while King’s hateful rhetoric runs on its own erratic time table.

After more than a decade of King embarrassing Iowa and casting doubt on our image as “Iowa nice,” leading Republican elected officials are finally taking action against him. The U.S. House resolution condemning King for his most recent outburst in defense of White supremacy is, well, better late than never.

Action by Congress is not likely to be, nor should it be, the final word against King. Pressure from his own party is now so pervasive that, I believe, King is in the homestretch of his long tenure of embarrassing Iowa.

To speed along that inevitability, the Republican-controlled Iowa House and Senate should offer its own resolution condemning King. Governor Kim Reynolds would have no choice but to sign it. The resolution should cite not only King’s most recent “White supremacy” quote, but his long litany of racially inflammatory remarks (yeah, I know, it’ll be a lengthy document).

The U.S. House resolution was offered by Democrats. A resolution at the state level from a Republican-led legislature would send an even stronger message that stamping out racism is a bipartisan commitment.

Of course, King’s tumble from tolerance raises another question: Why does President Donald Trump get a pass? Among the long list of hateful, hurtful things Trump has said or tweeted is this recent anti-Native belch:

“If Elizabeth Warren, often referred to by me as Pocahontas, did this commercial from Bighorn or Wounded Knee instead of her kitchen, with her husband dressed in full Indian garb, it would have been a smash!”

“As a Native, Trump’s tweet was equivalent to making a ‘joke’ about 9/11, Pearl Harbor or the Holocaust. I found it awful that not only did Trump use this tragedy as a joke, weapon and insult, but that his ignorance of American history is so great that he didn’t even know that Wounded Knee was a massacre and not a battle.”

Come on Republicans, you’re on a roll. Keep it going. An Iowa House and Senate chastisement of Steve King is the right thing to do and, for what it’s worth, would give Iowa a favorable national political headline.

And while you’re learning to navigate with your new-found moral compass, take action against President Trump, whose disdain for non-white people is as bad if not worse than King’s.

Ed Fallon is a former Iowa lawmaker who hosts the Fallon Forum and directs Bold Iowa. He is the author of Marcher, Walker, Pilgrim, his memoir about the 2014 Great March for Climate Action.