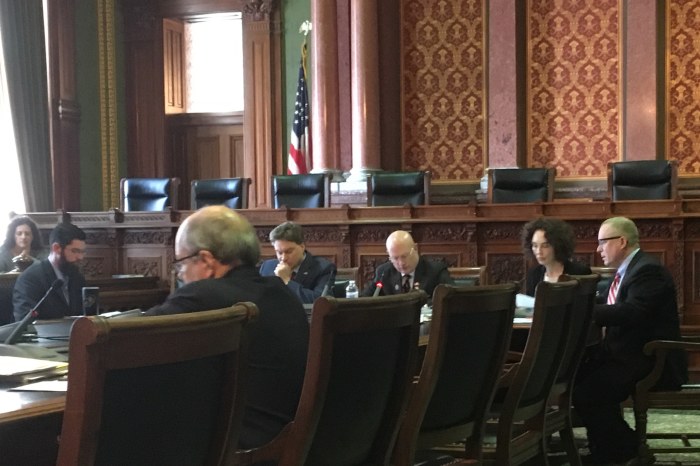 Every Iowa House Republican will likely vote on January 28 to dismiss Democrat Kayla Koether's contest of the House district 55 election. She trails State Representative Michael Bergan by nine votes according to certified results, but 29 absentee ballots that voters in Winneshiek County mailed on time remain uncounted.

Although Republicans on a special House election contest committee insist "there exists no legal authority to open and count the twenty-nine ballots in question," they are wrong about the law. Dismissing the contest without allowing Koether to call witnesses, take depositions, or have the ballots opened will open the door to judicial review.

The House Election Contest Committee met for the last time on January 24. As expected, Republican State Representatives Steven Holt, Jon Jacobsen, and Matt Windschitl voted to recommend that the House dismiss Koether's contest. Here's the full text of the majority report, which the House is scheduled to consider on Monday.

This committee met on January 14, 16, and 24, 2019. All members examined the statements and exhibits presented and submitted by the contestant and the incumbent.

This committee concludes that the relief sought by the contestant is not supported by Iowa Code 53.17, and further lacks support in Iowa Administrative Code 721-21.14(53), and the legislative history surrounding the adoption of HF 2273 in 2016.

It is clear, there exists no legal authority to open and count the twenty-nine ballots in question and thus no right to recanvass or recertify the election. The Winneshiek County Auditor and the Secretary of State have acted in accordance with the law. This committee cannot recommend the House act in violation of the laws that governed the election held on November 6, 2018.

This committee recommends the House dismiss the election contest and agrees with the official certification showing the incumbent, Michael Bergan, to be duly elected to the Office of State Representative from House District 55.

The Iowa House of Representatives (or a committee of its representatives), will sit as a “contest court” and hear the matter. Furthermore, pursuant to Iowa Code § 59, the parties can conduct discovery, issue subpoenas and take depositions as part of the contest procedure. The statute even allows the Plaintiff the right to have the ballots opened and considered. See Iowa Code § 57.5 (2018).

The judge didn't misunderstand the law. Here's the full text of the code provision in question.

Republicans are not required to care about how voters marked disputed Winneshiek County ballots. They could decide later not to add the totals for Bergan and Koether to the certified numbers. But the law is clear: parties contesting an election have the right to have the ballots opened. Koether should have been allowed to summon Winneshiek County Auditor Ben Steines (who has custody of the ballots) to Des Moines, so the envelopes could be opened and considered in an open proceeding.

Iowa Code Section 59 is vague about how contests should be conducted but clear about one thing: "Depositions may be taken in such cases," and "no cause for taking the depositions need be shown."

Republicans on the election contest committee never allowed Koether to call witnesses or take depositions. They merely heard arguments from attorneys on January 16.

"WE'RE NOT ASKING ANYBODY TO DO MS. KOETHER A FAVOR"

The two Democrats on the contest committee, State Representatives Mary Wolfe and Brian Meyer, are both attorneys. They submitted a minority report with far more legal analysis than the majority report.

During the January 24 meeting, Wolfe also handed out a paper listing "the hierarchy of laws" that apply to any discussion about the rule of law. "Not all types of legal authority are created equal," she observed. The Iowa Constitution is at the top, and it guarantees the fundamental right to vote in Article II, Section 1. After that comes statutory law; the most relevant sections here are Iowa Code 53.17 (governing which absentee ballots can be counted) and Iowa Code 57.5 (on election contests).

Wolfe spent several minutes walking through the important points of the minority report.

We've got the constitution saying everybody gets to vote as long as they follow the rules. We've got a statute saying you've got to get it in the mail by the day before the election, we're going to look at barcodes as one of the ways to prove that you did that. So our argument is that clearly, these 29 ballots meet that criteria.

Republicans want to go "further down the pyramid, the hierarchy of laws, to an administrative rule" saying the election commissioner may choose to use an intelligent mail barcode, Wolfe noted. But "you have to allow all the voters in all of the counties the same opportunity to have the votes counted." Some late-arriving absentee ballots in Fayette County were tallied, even though they lacked the kind of marking Republicans now claim must be on the Winnishiek County envelopes.

In any case, Wolfe argued, Iowa law stating that late-arriving ballots may be counted if mailed on or before the day prior to the election "has priority over the administrative rule" defining "intelligent mail barcode." Moreover, a fundamental constitutional right takes precedence over a law.

We're not asking anybody to do Ms. Koether a favor, to treat her any differently than we would treat any candidate who came before us with this issue. We are just asking that this committee follow the law, follow the constitution, and recommend that all of those 29 legally submitted ballots be opened and counted.

When it was his turn to speak, Meyer pointed out that it's "incorrect" for Republicans to say the committee has no legal authority to count the ballots. "You're choosing not to use that authority." He read out the text of Iowa Code 57.5. While Republicans chose to adopt a narrow definition of intelligent mail barcode, "It is our right to have witnesses and to have exhibits presented."

When the Iowa House considered an election contest in 1975, the five-member special committee spent months reviewing evidence and heard witnesses called by each side. At the end of this post, I've enclosed the majority and minority reports from that episode.

Contest committee chair Holt insisted on January 24 that Republicans had followed the rule of law. "Every fundamental right has parameters around it," he said. For example, absentee ballots must be signed and sealed in order to be counted. "These rules exist in code to ensure the integrity of the process and the integrity of the election."

His reasoning is flawed. The 29 Winneshiek County voters did not make a mistake like forgetting to sign or seal their absentee ballot envelopes. They followed the rules and mailed their ballots on time, as the U.S. Postal Service later confirmed by examining data printed on the envelopes. Moreover, a district court judge already said Koether has the right to have ballots opened and considered. So House members do have the authority to grant her request.

Holt read out the language of Iowa Code 53.17, adding his commentary:

"In order for the ballot to be counted, the return envelope must be received in the commissioner’s office before the polls close on election day"--the 29 ballots in question were not.

"[O]r be clearly postmarked by an officially authorized postal service"--the 29 ballots in question were not.

"[O]r bear an intelligent mail barcode traceable to a date of entry into the federal mail system not later than the day before the election and received by the commissioner not later than noon on the Monday following the election." This is the heart of the matter.

Holt claimed he and his Republican colleagues reviewed evidence from Iowa House and Senate debates in 2016, when state lawmakers approved a bill giving county auditors the option of paying for intelligent mail barcodes. He argued that the "integrity of the system" depends on following legislative intent and asserted that Koether was asking for her ballots to be treated differently. But in Fayette County, officials counted some late-arriving ballots without an intelligent mail barcode.

"THAT'S NOT DUE PROCESS"

I'm really disappointed. You know, I was here when these folks were sworn in [on January 14], and I heard them give an oath to uphold the Iowa Constitution and the U.S. Constitution, and I expected that this process would be conducted in good faith. So to not hear witnesses, to not hear from the people that were directly impacted by this, I think it was really a disservice to this process, and it will really leave the voters of my district questioning the outcome of this process.

Koether has spoken with many of the voters who cast these uncounted ballots, and "they want their voices to be heard [...] They followed every single rule, and put their ballot in the mail on time, and yet still, we're refusing to allow their basic rights to be met."

This committee may have heard me talk and the other attorney talk, [but] we are not witnesses, we still don't have all the evidence, and that's not sufficient. That's not due process. And the Iowa Code, however unclear it is on contests, was very clear that ballots should be brought down and counted and opened.

And the fact that there was a perfunctory, a couple-paragraph summary [in the majority report], no investigation, no actually talking to anybody that matters. I mean, they're saying it's clear based on outdated postal laws. No one at the post office talked about this. It's clear that it was not truly considered. The outcome was determined prior to the committee being appointed.

Neither McCormally nor Koether committed to filing suit following the vote in the full Iowa House, but Democrats would be foolish to drop this matter now. The Polk County District Court declined to order the 29 ballots counted on the assumption that Koether would be able to have them "opened and considered" during her election contest. Republicans are flouting Iowa Code 57.5. A court could well find that House members violated Koether's due process rights.

Final note: the optics of this mess are terrible for Republicans. Bergan has been declining media requests for comment and letting GOP colleagues do his dirty work. Why would he not demand that 29 of his constituents have their votes counted?

Next week, the entire House Republican caucus will go on record disregarding ballots cast by Iowa citizens who are eligible to vote and made no mistakes. Their only sin was having the wrong kind of ink printed on the envelope during postal service processing.

After this farce, Republicans who put an administrative rule above a fundamental right should be laughed at if they ever posture as "constitutional conservatives."

Appendix 2: Reports submitted by the Election Contest Committee that considered a disputed Iowa House race in 1975. I created this pdf file from the House Journal for May 12, 1975.