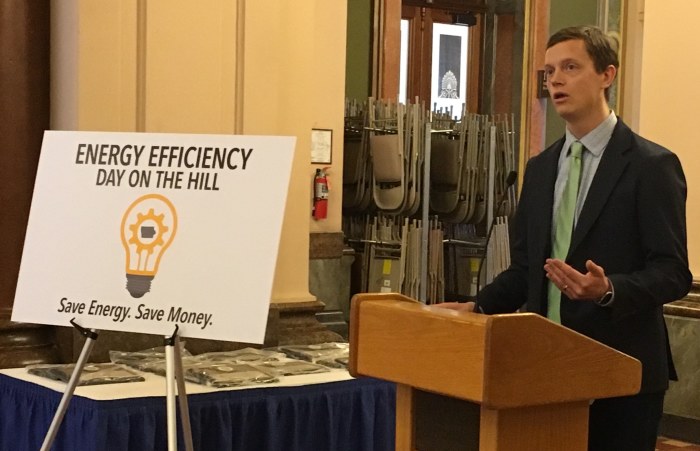 Catching up on news from last week: State Auditor Rob Sand announced on January 22 that energy efficiency recommendations will be part of every audit his office produces of a municipal, county, or state government entity.

For the last two decades, the state auditor’s office has produced reports that mostly discussed a government entity’s financial condition and whether funds were properly spent for the intended purpose. But Iowa Code authorizes the state auditor to report other findings as well, such as:

Sand promised repeatedly during last year’s campaign that he would take a broader view of the office’s power to look for ways to save taxpayer money. Speaking to an audience gathered at the state capitol for “Energy Efficiency Day on the Hill,” he pointed out that “you have a tremendous ability to save taxpayer money through improving energy efficiency in Iowa.”

This is also something that isn’t controversial [….]

As lieutenant governor, Kim Reynolds put benchmarking as a part of her Iowa Energy Plan. And the Iowa Energy Office right now actually works with government entities to do some of this work.

So we will be working in conjunction with the Iowa Energy Office to make sure that more government entities in Iowa at the local, county, and state level are not just hearing about benchmarking but actually conducting benchmarking and then following that up with energy efficiency improvements to make sure that they are saving money.

Benchmarking is a way “to measure energy performance of a single building over time, relative to other similar buildings.” In Sand’s words, it’s like “taking a snapshot of your energy use and figuring out, ‘Where are we right now?” And then once you know where you are, you can figure out where you need to go.” The U.S. Department of Energy provides more information here about the process and available tools.

As Sand mentioned, Reynolds led the group that developed the Iowa Energy Plan a few years ago. “Energy efficiency and conservation” was one of that plan’s four pillars, with calls to “Increase the energy efficiency and decrease the operating costs of Iowa’s existing and new buildings in all sectors,” and to “Lead by example in Iowa’s government practices.”

I’m not aware of any steps Reynolds has taken as governor to promote that pillar of the energy plan. On the contrary, she signed a bill last year that undermined decades-old, successful energy efficiency programs for the benefit of investor-owned utility companies.

A reporter asked Sand on January 22 whether his office would be able to force any government bodies to decrease their energy use. “A big piece of what our office does is promote accountability,” he responded. Once public recommendations become part of state audits, citizens will be better able to press for concrete steps to save money by conserving energy.

A greater focus on efficiency won’t be the only thing Sand does differently from the last two state auditors, David Vaudt and Mary Mosiman. Here’s a revealing exchange from his January 4 interview on Iowa Public Television’s “Iowa Press” program.

[Radio Iowa’s O.Kay] Henderson: Your two predecessors did not weigh in on the budget making process until after it had concluded and the Governor had signed bills into law. Do you intend to comment on proposals that are made at the legislative level?

Sand: I know I can tell you I will be more willing to than my predecessors. They have taken in the past a very narrow approach and I look at this and I think, how can you be a taxpayer’s watchdog if you’re only barking when the burglar is on the way out of the house? Right? I mean, if you see something coming that doesn’t look good, well bark about it before it’s trouble, right? You should do something to be preventative about it. Just to make a comment after the fact you’re not doing as much as you could do for taxpayers.

Something for Republican appropriators to keep in mind as they draft the state budget for fiscal year 2020, which begins on July 1.