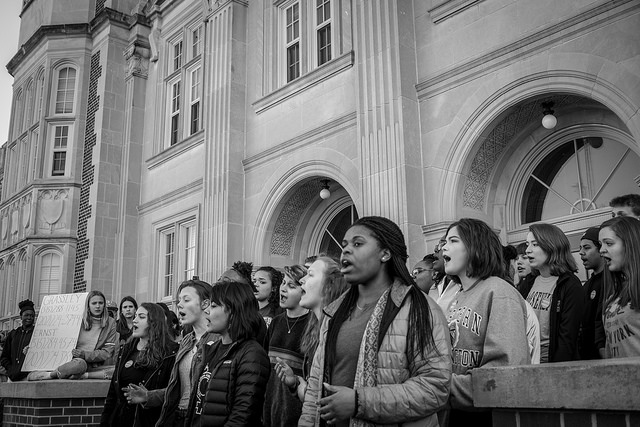 Ira Lacher comments on signs of growing youth activism: "The revolution will not be televised. But it may be streamed, Instagrammed and tweeted." -promoted by Laura Belin

"The revolution will not be televised," Gil Scott-Heron wrote in an iconic 1970 anthem that many of us digested over and over while we considered what should happen with America.

My generation marched to end the Vietnam War and police brutality, advance the Equal Rights Amendment and other "socialist" causes. We said we want a revolution, but well, you know, there were the needs of getting jobs, starting families, buying homes, putting children through college. The ideals of revolution transmogrified into the reality of Reaganomics, fear of being blown up by terrorists and the creaks of advancing age.

But if recent events in New York City are an indication, the revolution may be stirring once again.

Rather than face the ire of progressives concerned about billions of dollars in tax giveaways to a multinational corporation that paid no income tax in 2018, Amazon abandoned its plan to build a second headquarters in New York. The defeat of Amazon was a shout against capitalism run amuck. As David Leonhardt wrote in The New York Times: "For decades, local politicians have felt pressure on only one side of this issue: To do whatever it takes to attract companies. As a result, those politicians have contributed, often unwittingly, to the radical rise in economic inequality."

Them's socialist words, and they were spoken by Amazon critics such as Congresswoman Alexandria Ocasio-Cortez, who tweeted against the deal when it was announced. At 29, she's become the leader of Millennial (born before 1996) and Gen-Z (born after) progressives.

That a generational divide exists was evident in the Amazon supporters. They were largely of an older, moneyed demographic, including real estate honchos, who stood to make a killing; New York Governor Andrew Cuomo; and Cher, who, by one estimate is worth $360 million.

Pew found that seven in ten Generation Z respondents approved of government solving problems. Six in ten said it was beneficial for society to increase racial diversity. More than half believe humans caused global warming. More than six in ten believe in the take-a-knee protests of some NFL players. Nearly half believe that same-sex and interracial marriages are good for society. And only a little more than one in ten believe in American exceptionalism.

Beliefs are one thing; actions are another. For the first time, progressives of those age groups have champions who are in position to translate those feelings into policy. Ocasio-Cortez is too young to run for president. Now. But Senator Elizabeth Warren, who champions progressive policies such as an "Ultra-Millionaire Tax" and Medicare for all, is a solid favorite among readers of The Daily Kos, a progressive news site favored by Gen-Z'ers and Millennials.

Will they stay energized, enough to caucus and vote their passions once the calendar turns to 2020? One reason the answer may be yes is technology: Unlike my generation, they have the social media tools and resources to mobilize marchers and keep them moving.

Without a doubt, something's happening here; what it is ain't exactly clear. But almost 50 years on, it seems that Gil Scott-Heron was right: The revolution will not be televised. But it may be streamed, Instagrammed and tweeted.

Top image: Photograph from a series by Phil Roeder, taken during a March 1, 2018 walkout at Roosevelt High School in Des Moines, used with permission.