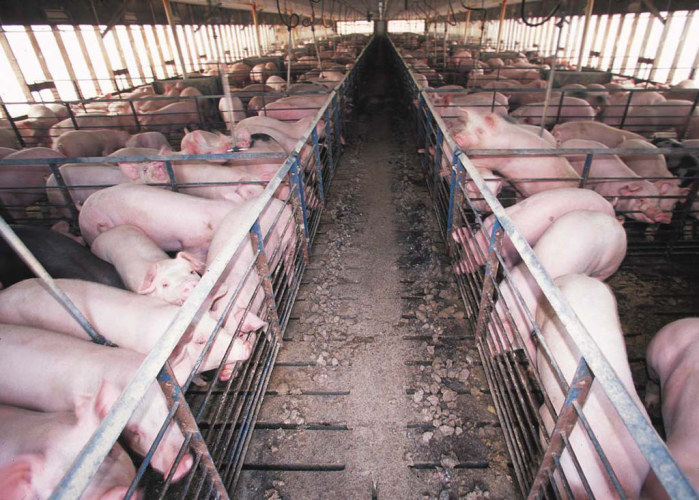 State not ready to accept "Ag Gag" law is unconstitutional

But the Attorney General’s office confirmed on February 21 that the state will appeal a federal court ruling against the 2012 law. The new court filing keeps up the pretense that a law designed to suppress investigative reporting was really about biosecurity and property rights.

The American Civil Liberties Union of Iowa and several advocacy organizations (the Animal Legal Defense Fund, People for the Ethical Treatment of Animals, Bailing Out Benji, Iowa Citizens for Community Improvement, and the Center for Food Safety) filed suit in U.S. District Court in 2017, asserting that

The ag gag law is particularly disturbing, too, because of the way that it inhibits the ability of journalists or watchdog organizations to collect and publish important information. […]

The lawsuit named Governor Kim Reynolds, Miller, and Montgomery County Attorney Bruce Swanson. The state moved to dismiss the case, but in early 2018, the court dismissed only the equal protection claims–not the First Amendment part of the case. Both sides then moved for summary judgment, meaning the court would decide the case without a trial. The state argued,

Furthermore, the state claimed lawmakers who supported the bill and then Governor Terry Branstad weren’t trying to suppress speech. Rather, they were concerned with “1) bio-security or the prevention of disease transmission; and 2) protection of private property.”

Rita Bettis Austen, legal director for the ACLU of Iowa, hailed Judge Gritzner’s ruling as “an important victory for free speech in Iowa.”

“An especially grievous harm to our democracy occurs when the government uses the power of the criminal laws to target unpopular speech to protect those with power—which is exactly what this law was always about.

“Ag gag clearly is a violation of Iowans’ First Amendment rights to free speech,” Bettis said. “It has effectively silenced advocates and ensured that animal cruelty, unsafe food safety practices, environmental hazards, and inhumane working conditions go unreported for years. We are so pleased with the Court’s order today and that the law has finally been held to be unconstitutional.”

The Attorney General’s office released no statement about last month’s decision, other than confirming they were studying it.

Although federal courts have struck down all or parts of similar laws in other states, this week the Attorney General’s office filed a motion to stay the lower court decision pending appeal. Key points:

Defendants respectfully submit there is substantial ground for difference of opinion, and thus a reasonable likelihood of success, as to whether Iowa’s Ag-Fraud statute restricts protected speech in violation of the First Amendment. The Supreme Court has held false speech that imposes a legally cognizable harm or provides a material gain to the speaker is not protected under the First Amendment. […]

Defendants have argued there is no First Amendment right to use false pretenses to gain access to an agricultural production facility or employment at said facility, with the intent to knowingly commit an unauthorized act because: 1) unconsented entry to private property constitutes a trespass in Iowa—a legally cognizable harm from which the law infers some damage; and 2) obtaining permission to enter private property or employment at a facility on said property provides a material gain by conferring the ability to do lawfully that which the law otherwise forbids and punishes as trespass, and it can provide income to the speaker. […]

Moreover, as previously set forth, the Supreme Court expressly addressed the use of false pretenses in obtaining employment, finding a restriction on such conduct does not violate the First Amendment, which the court recognized in Wasden. […] The Supreme Court’s analysis is equally applicable to Iowa’s Ag-Fraud statute and supports the conclusion that a prohibition on obtaining employment under false pretenses, with an intent to commit an unauthorized act, does not run afoul of the First Amendment.

The state also argued that Gritzner’s order blocking the enforcement of the law could do “irreparable” harm, because the state would not be able to protect biosecurity and private property rights, and agriculture is important to Iowa’s economy.

Prior to issuance of the Court’s MSJ Order, there had been no violations of Iowa’s Ag-Fraud statute since its passage in 2012. See Complaint, ¶ 6 (Docket No. 1) (“In the years leading up to the passage of the Ag-Gag law in 2012, there were at least ten undercover investigations in Iowa. Since the law’s passage, there have been zero.”).

Citing an article by Donnelle Eller, the state’s brief noted that since the U.S. District Court’s decision, “advertisements for undercover investigators at animal production facilities in Iowa have now been posted […].”

Maybe a panel of conservative judges on the Eighth Circuit Court of Appeals will overturn Judge Gritzner’s ruling, but I am inclined to agree with the representatives of plaintiffs, quoted in Eller’s latest story for the Register.

“The court of appeals will recognize this law as the speech-suppressing censorship tool that it is,” said Matthew Liebman, litigation director at the Animal Legal Defense Fund, one of the groups challenging Iowa’s law.

“We had a really solid case, and the court agreed with us that these kinds of laws are unconstitutional,” said Veronica Fowler, a spokeswoman for ACLU of Iowa, another group challenging the law.

“These laws have been struck down for similar reasons in other states. This decision isn’t an outlier,” she said.

Despite the narrative the state is putting forward, this law’s primary purpose was never to prevent the spread of disease or to protect private property. Its proponents hoped to suppress investigative reporting on what happens inside agricultural facilities. The first draft of the bill was even more explicit, since it would have banned unauthorized audio and video recordings.

Agricultural businesses don’t deserve any special shield against whistleblowers or investigative reporters, especially when that protection comes at the expense of protected speech.

Appendix 2: Motion to stay pending appeal, filed on February 20 by the Iowa Attorney General’s office on behalf of the state.