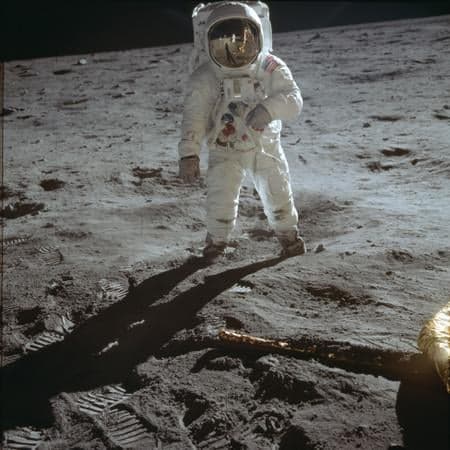 Ira Lacher: “America doesn’t dream big anymore. Even before the ascension of Donald J. Trump, or the Tea Party, or the Contract with America, we set our sights ridiculously low, the way we do when driving in fog.” -promoted by Laura Belin

Saw the new Apollo 11 documentary Saturday night. And I noticed two things immediately: how so many people were fascinated by an event that took place half a century ago . . . and how many of them were young people. It wasn’t just nostalgia that drove a crowd to a movie theater on an awful weather day.

The movie ended with a video excerpt of the classic speech President Kennedy made when he challenged America to land a man on the moon and return him safely to earth before the decade was out.

“We choose to go to the moon in this decade and do the other things,” Kennedy said at Rice University, “not because they are easy, but because they are hard, because that goal will serve to organize and measure the best of our energies and skills, because that challenge is one that we are willing to accept, one we are unwilling to postpone, and one which we intend to win . . . ”

Yes, the space program was an outgrowth of the Cold War, which the president acknowledged — we weren’t going to let the Soviet Union establish missiles in space or military outposts on our close satellite. But he added that security was not the only reason America was committed to spend what would amount to $107 billion and the uncountable hours contributed by 400,000 people .

“The growth of our science and education will be enriched by new knowledge of our universe and environment, by new techniques of learning and mapping and observation, by new tools and computers for industry, medicine, the home as well as the school,” the president said. He was right. Advancements we take for granted today, such as Velcro, de-icing systems for airplanes, and improved radial tires, were designed for the space program.

“Many years ago the great British explorer George Mallory, who was to die on Mount Everest, was asked why did he want to climb it. He said, ‘Because it is there.’ Well, space is there, and we’re going to climb it, and the moon and the planets are there, and new hopes for knowledge and peace are there.”

Big dreams. And the commitment to make them come true.

When I got home, I viewed something else: an interview Senator Cory Booker gave to Stephen Colbert on Friday night’s show. The New Jersey senator was full-on enthusiasm as he spoke of the accomplishments America has made during his lifetime and exhorted viewers to believe in what can be done if we all work together.

America doesn’t dream big anymore. Even before the ascension of Donald J. Trump, or the Tea Party, or the Contract with America, we set our sights ridiculously low, the way we do when driving in fog. Just don’t hit anything.

Can you think of a big dream we’ve had as a nation in the last 30 years or so? Surely, there have been challenges to meet. Cure AIDS. Go to Mars. Re-imagine our energy. End global warming.

But no. We just feel content as Americans to go back to an earlier time. Before a handsome man stood behind a podium at Rice University and challenged us to dream.

Besides Booker, I can’t recall one candidate daring Americans to dream big again. But isn’t that what Americans need? The twenty-first century was going to remake our world as we never knew. And what do we have? Twitter.

Big dreams gave birth to the most dynamic nation the planet earth has ever witnessed. Where is the leader who can inspire us to dream big again?