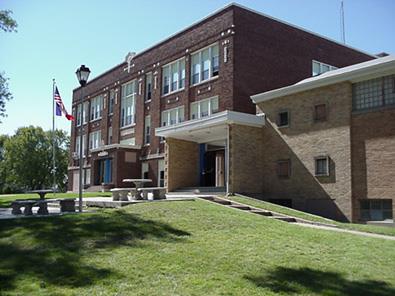 Show me the money: Is your school district hoarding cash? (updated)

The last eight years haven’t been kind to Iowa’s public school districts. During that time the Supplemental State Aid (the money local districts can spend on their regular program budgets) has been on a downward trend — from a 4 percent increase in fiscal year 2010 to a 1.8 percent average increase over the last eight years. Many school districts have been forced to tighten their belts by laying off staff or giving out smaller pay raises.

However, a few Iowa districts have found a way to spend far less of their resources and have accumulated huge savings during this time period.

In order to explain this better, it helps to know a few terms commonly used in school finance. In Iowa, school districts can’t spend unlimited amounts of money. Instead the state assigns each school district a maximum amount of money that can be spent from their General Fund. This is called Spending Authority.

School finance experts offer guidance to school districts on how much to spend each year and how much to hold in reserve (and into Unspent Balance). They typically recommend that school districts maintain reserves of between 5 and 15 percent of their expenses. This allows districts to have proper cash flow and funds available for emergencies. Holding back more than 20 percent of your actual expenses as a reserve is considered excessive and is not recommended.

Altogether Iowa school districts had accumulated $1.2 billion in unused Spending Authority and $1.1 billion in cash in 2017-18. Less than half of all school districts in the state fell into the 5 to 15 percent range for reserves. These districts followed the advice and kept a reasonable reserve. Many of these school districts are feeling the pinch of lower state funding and some are having legitimate financial constraints.

Unfortunately, 177 school districts did not follow this advice and retained reserves in 2017-18 that exceeded 20 percent of expenses. I listed the districts in alphabetical order here, with each district’s Fund Balance and what that total represents as a percentage of their expenses.

Rather than looking at both Unspent Balance and Fund Balance from this point forward, let’s focus on Fund Balance, since it represents actual cash.

In 2017-18 those 177 school districts mentioned above had accumulated more than $557 million in cash. That represents 26.5 percent of their actual expenses. Sioux City was the only “Urban Eight” district to make the list. However, several other large districts such as Bettendorf, Burlington, Fort Dodge, Johnston, Muscatine and Southeast Polk did as well.

Most of the districts on the list are small, rural districts. Of those 177 districts, 26 had accumulated an amount of cash equal to more than 40 percent of their actual expenses. Ten of those had cash exceeding 50 percent of expenses.

In order to give you a better idea of the scale of the issue, let’s focus on those ten districts: East Mills, Hamburg, Harris Lake Park, Laurens Marathon, Murray, North Linn, Olin, South Central Calhoun, Twin Rivers and West Bend Mallard. The Twin Rivers school district in North Central Iowa had cash reserves of $2,413,246. Those cash reserves amounted to a whopping 113.1 percent (the highest in the state) of actual expenses. 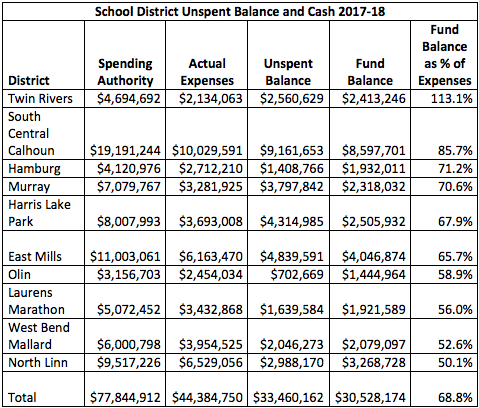 Of course, it’s not just about giving teachers more money. Taxpayers provided funds so that the schools could provide an outstanding education to their students. Think about all the things these districts could have done. They could have lowered class size by hiring additional teachers, hired more support staff, provided great field trips for students, improved their career and technical offerings, and taught students skills that would carry them into the future. With that kind of funding, the possibilities are endless.

Despite years of chronic underfunding, schools with large reserves are likely to see little change in those amounts. Changes to Iowa’s collective bargaining law in 2017 greatly reduced the ability of teachers to bargain for higher salaries when schools have the resources to pay.

Under current law, local unions can only bargain base salary. That limits the ability of teacher groups to seek improvements in the pay of experienced teachers and those who have advanced degrees. It also limits the amount teachers can seek in arbitration hearings. Since teachers can no longer bargain insurance benefits, it’s increasingly likely that school districts will seek to pass along those additional costs to their staff.

What can be done to remedy the situation? Ideally these school districts would use funds to enhance opportunities and programs for students and increase staff, as well as provide their staff with competitive pay and benefits. In addition, districts would voluntarily work to limit increases in cash reserves.

Neither of those scenarios seem likely to happen. A legislated fix that caps cash reserves would probably need to occur. Any such proposal would likely open up a battle between the schools who have accumulated large reserves and those who have not.

UPDATE: A couple of readers have questioned the accuracy of the numbers in this article. To be clear, the numbers I used in the article are all available to the public from the Department of Management’s web site. School finance is fairly complex, and unless you work with it on a regular basis it can be difficult to grasp.

I was a classroom teacher at a small school district and then a consultant for what in now the Green Hills Area Education Agency for 24 years. During much of that time I served as the chief negotiator for the local education association. In that role I became very familiar with school finance. I then worked for the Iowa State Education Association for fifteen years prior to retiring in 2016. For the last nine years of that time, I managed the field staff and the research department (which also handled school finance). While I would never consider myself to be an expert on school finance, I do have considerable knowledge of how it works.

One reader questioned if the numbers I reported contained money that was part of a bond for the construction of a building project [in South Central Calhoun school district]. That answer to that is “no.” The numbers I reported come from the school district’s General Fund. Another question focused on the Laurens Marathon school district. Laurens Marathon has been facing issues around their finances for some time. They appeared before the School Budget Review Committee in 2015 to develop a financial “workout” plan after they overspent their authority the previous two years. That plan required major cuts, but during that time their Fund Balance continued to grow. There are a variety of reasons for this (none of which I know for sure). The numbers for Laurens Marathon come directly from the Department of Management and are accurate.

I was also asked why I didn’t call school districts to ask for comments on why they had an unusually high level of cash. It was never my intent to explore the reasons this has happened–only to report that over 170 districts had fund balances so high that they were considered to be excessive. Also calling 170 school districts would have likely given me 170 different reasons and would have resulted in an article measured in volumes rather than paragraphs. If people have comments or questions, they can post comments here and I can answer them as best I can.