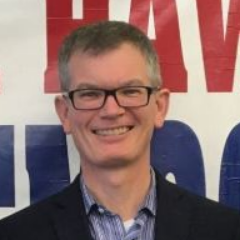 Unofficial numbers reported by Nelson showed Giddens received 3,942 early votes, Rogers 2,125 votes, and Perryman 48 votes. In other words, Giddens went into election day with a lead of 1,817 votes--indicating that local Democrats were correct that they had mobilized a majority of the no-party voters who cast early ballots.

Including the March 19 voters, Giddens leads Rogers by 1,979 votes. The many canvassers on the doors today included presidential campaign staffers and labor activists. The ever-popular Deidre DeJear (who had recently knocked doors for Giddens) "squeezed in" some final phone calls on his behalf. Desperate GOP television commercials about socialism and late-term abortion failed to mobilize enough conservatives to save Rogers.

Giddens will be up for re-election to a full four-year term in 2020. One wonders whether Republicans will target this district, given the relatively poor performance by a well-known GOP candidate. The previous Senator Jeff Danielson was re-elected by narrow margins in 2008 and 2012 but more comfortably in 2016, when Senate Republicans focused the bulk of their pre-election spending elsewhere. Rogers told Radio Iowa after conceding the race to Giddens, "I think this district is moving to the left." Republican Party of Iowa state chair Jeff Kaufmann laughably claimed on Twitter,

Despite the attention and adoration of national Democrats, Eric Giddens underperformed tonight. Make no mistake, SD 30 has always been a deep blue seat. In a sheer panic, Senate Democrats pulled out every stop to retain a seat that has been theirs for 15 years #ialegis #iagov

Once Giddens has been sworn in, Democrats will hold 18 seats and Republicans 32 seats in the Iowa Senate. That's the lowest point for Democrats in decades, but at least they stopped the bleeding. A win for Rogers would have put Republicans just one seat short of the two-thirds majority (34 votes) needed to confirm the governor's nominees without any Democratic support.

I enclose below a map of Senate district 30 and excerpts from a statement released by Iowa Senate Democrats on March 19.

“Thanks to everyone for their support on this wonderful day.

I want to thank my wife Kendra and my son Henry for their support during this short but intense campaign. Like hundreds and hundreds of Iowans, they volunteered during weekends and evenings to knock doors, made phone calls, and attended rallies and other campaign activities. I couldn’t have done this with the support of so many people ….and I am thankful for that!

Finally, I want to pledge tonight that I will go the Iowa Capitol to work with Democrats and Republicans by focusing on real solutions to real problems in the Cedar Valley.

This includes working to:

“Together, we won this special election. With your continued support, I promise to everyone that I will work hard in the Iowa Senate.”

“We are excited that Black Hawk County voters elected Eric Giddens to serve in the Iowa Senate. Eric will be a champion for better schools, better jobs, better health care and a better quality of life in the Cedar Valley. Three cheers to Cedar Valley voters who rejected the negative, dishonest campaign tactics by Walt Rogers and the Iowa Republican Party.

“We are thankful for the great effort by Eric Giddens, his family, the Black Hawk County Democrats, and volunteer from across the state.

“Senate Democrats remain committed to standing up for hard-working Iowans. We believe every Iowan deserves access to affordable health care, strong public schools, and the chance to get ahead in life.”

Giddens is a Program Manager at the Center for Energy and Environmental Education (CEEE) at UNI and is a member of the Cedar Falls School Board.

Eric's wife Kendra is a Cedar Valley native and a former teacher in the Cedar Falls School District. Their son Henry is an 8th grader at Peet Junior High in Cedar Falls.

“I am committed to listening and working hard to solve problems and to help Iowans improve their communities,” Giddens said. “It’s time to elect more leaders who have the courage to stand up and support the kind of change that is needed.”