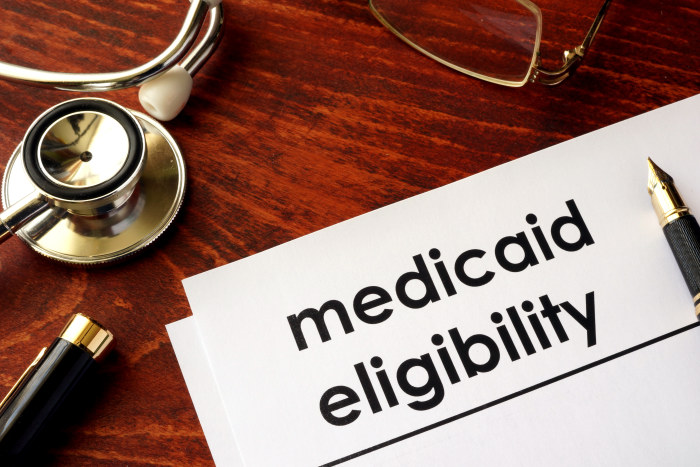 Matt Chapman has closely followed this year's legislative proposals affecting Iowans on public assistance. He previously reported on a separate bill with a $40 million price tag. -promoted by Laura Belin

A Republican bill seeking to impose new work requirements on some 170,000 Medicaid recipients in Iowa would cost the state budget nearly $5 million more the first year and an additional $12 million every year thereafter, according to analysis by the nonpartisan Legislative Services Agency. Any savings to the state would be "minimal."

Senate File 538 is one of five bills introduced in the upper chamber that would affect Iowans on Medicaid, food assistance, or other programs for people with lower incomes. It would instruct the Iowa Department of Human Services to request a waiver from the federal government's Center for Medicare and Medicaid Services "to require that as a condition of eligibility, Iowa health and wellness plan members participate in community engagement activities."

The Iowa Health and Wellness Plan is the name for our state's version of Medicaid expansion, now managed by private companies and covering approximately 170,000 adults ages 19 to 64 with incomes below 133 percent of the federal poverty level.

As Bleeding Heartland discussed here (when the same proposal was numbered Senate Study Bill 1134), the out-of-state conservative group Opportunity Solutions Project helped write this bill and has pushed for similar policies in other states, including a Kentucky law struck down in federal court.

The Legislative Services Agency estimates the budgetary impact of pending bills and on March 18 published the third version of a fiscal note on Senate File 538. Key findings from that analysis (enclosed in full below):

This table breaks down the increased costs: 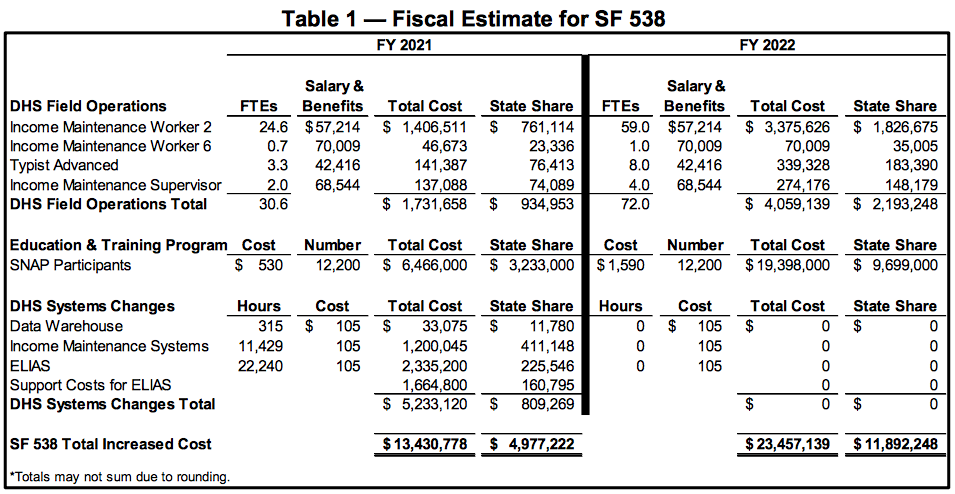 The analysis noted that the Department of Humans Services "is unable to determine" the impact on enrollment in the Iowa Health and Wellness Program, since "the specific community engagement or work activities requirement criteria" has not yet been defined. However, "It is assumed if an individual is disenrolled due to noncompliance, that individual may reenroll at any time." (emphasis added)

That sentence reflects one of many concerns about this bill: additional red tape could make it much harder to stay enrolled in Medicaid.

An Arkansas workfare bill “locked out” eligible people until the following year, as Benjamin Hardy reported for the Arkansas Times last November. In many cases, so-called “non-compliance” stemmed from a confusing and redundant re-certification process, which caused eligible recipients to make paperwork errors. In Arkansas, whether you are locked out in April or December, you cannot re-enroll until the following January.

It's not yet clear whether that will be the case in Iowa. If our state followed the path of Arkansas, it would be devastating to rural hospitals that are already struggling. Rural hospitals and providers depend on Medicaid for much of the reimbursement for services. People removed from the rolls would switch from the doctor’s office to the emergency room for care.

Litigation is likely to ensue if Iowa enacts this law, the fiscal note pointed out: "While adding this requirement as a condition of eligibility does not conflict with existing federal law, other states have experienced lawsuits and legal implications after receiving approval from the CMS to impose community engagement or work activity requirements."

Lawsuits are pending in Arkansas as citizens are denied services. In Kentucky, the courts have stayed the federal waiver that would allow the state to implement workfare. The D.C. Circuit Court of Appeals ruled that Kentucky's waiver violated the 2010 Affordable Care Act, which was intended to provide healthcare to the growing population that could not afford access.

Senate File 538 seems to have lost some lobbyist support since it was amended, renamed, and passed out of committee. At this writing, about two dozen entities are registered against the bill, representing a wide array of health care, religious, and advocacy organizations. Only two entities have lobbyists registered in favor: Americans for Prosperity and the Opportunity Solutions Project. That group's lobbyist Karla Fultz McHenry introduced this bill and three others targeting Iowans on public assistance.

Opportunity Solutions Project has written model legislation that harshly impacts the most vulnerable in our society. A 2016 memo illuminates the group's agenda of influencing Republican-controlled statehouses to turn a buck on the back of the impoverished.

Final note: the Republican senator who sponsored all of this year's bills aimed at Iowans on public assistance is Jason Schultz, chair of the Senate Labor and Business Development Committee. He represents Crawford County, where 18 percent of his constituents live under the poverty line. Roughly one in four Crawford County residents are eligible for Medicaid.