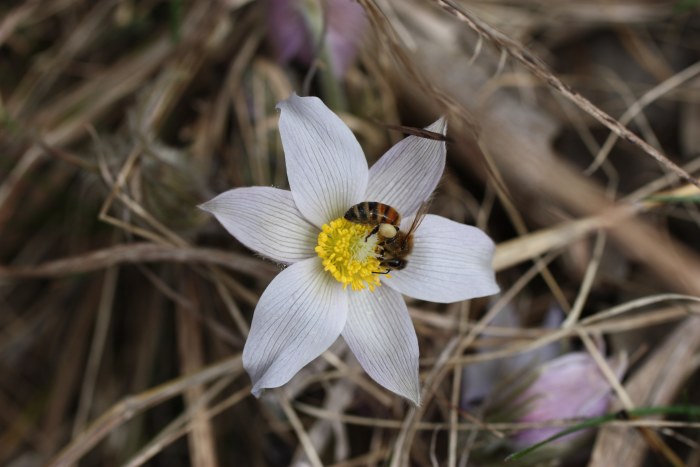 A good description of the flower and its background can be found on the U.S. Department of Agriculture’s Forest Service website.

As Aldo Leopold wrote in the forward to A Sand County Almanac,

For us of the minority, the opportunity to see geese is more important than television, and the chance to find a pasque-flower is as inalienable as free speech.

I think it is fair to say that the adaptability of geese to human environs and the resulting growth of their population has taken a bit of their mystique away since Mr. Leopold wrote these words. By contrast, I’m afraid the chance to find a pasque flower has dwindled since he penned this famous sentence and is no longer quite so inalienable.

Few get the opportunity to watch the season of the pasque flower unfold from the first warming days of March (sometimes even February), when the flower’s cloaked fingers start pushing up from the dun grasses, to the graceful unveiling of their sunlit center and the rush of pollinators to feast on this early spring banquet, to the browning of the sepals that enfold the developing seed head like a crepe-paper wrapper, and finally to the full display of wiry seeds, to be cast on the wind to fall as they may.

I am most fortunate and grateful to have been able to witness this spectacle over many years in Harrison County and to have taken some time to record it. Here I share a season in pictures with readers of Bleeding Heartland.

So how did the season play out for me? The late spring slowed the growth of many spring wildflowers. I was able to catch some pasque flowers emerging, bundled in their fur coats, on March 31. In previous years, I have seen them begin to poke forth by early to mid-March. 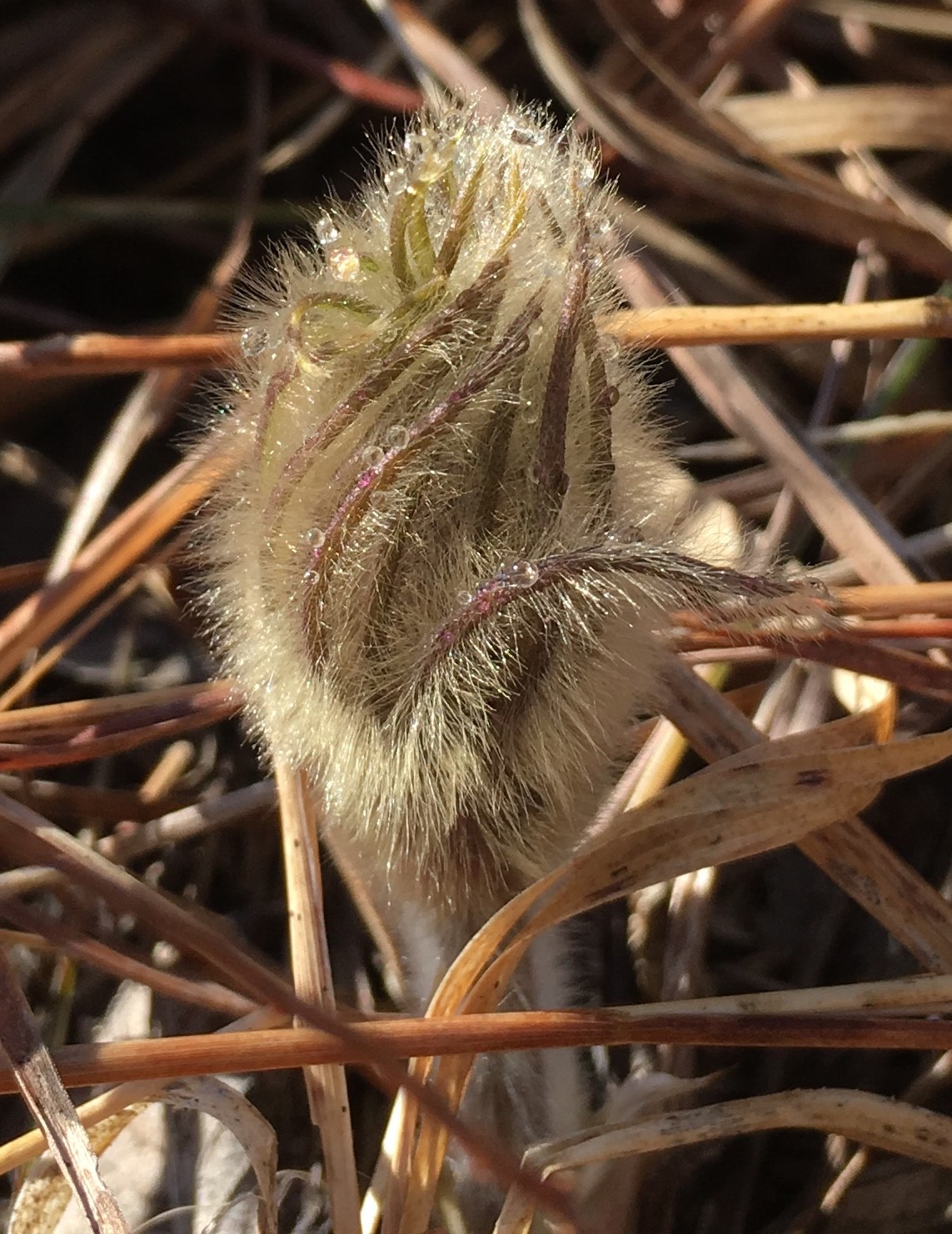 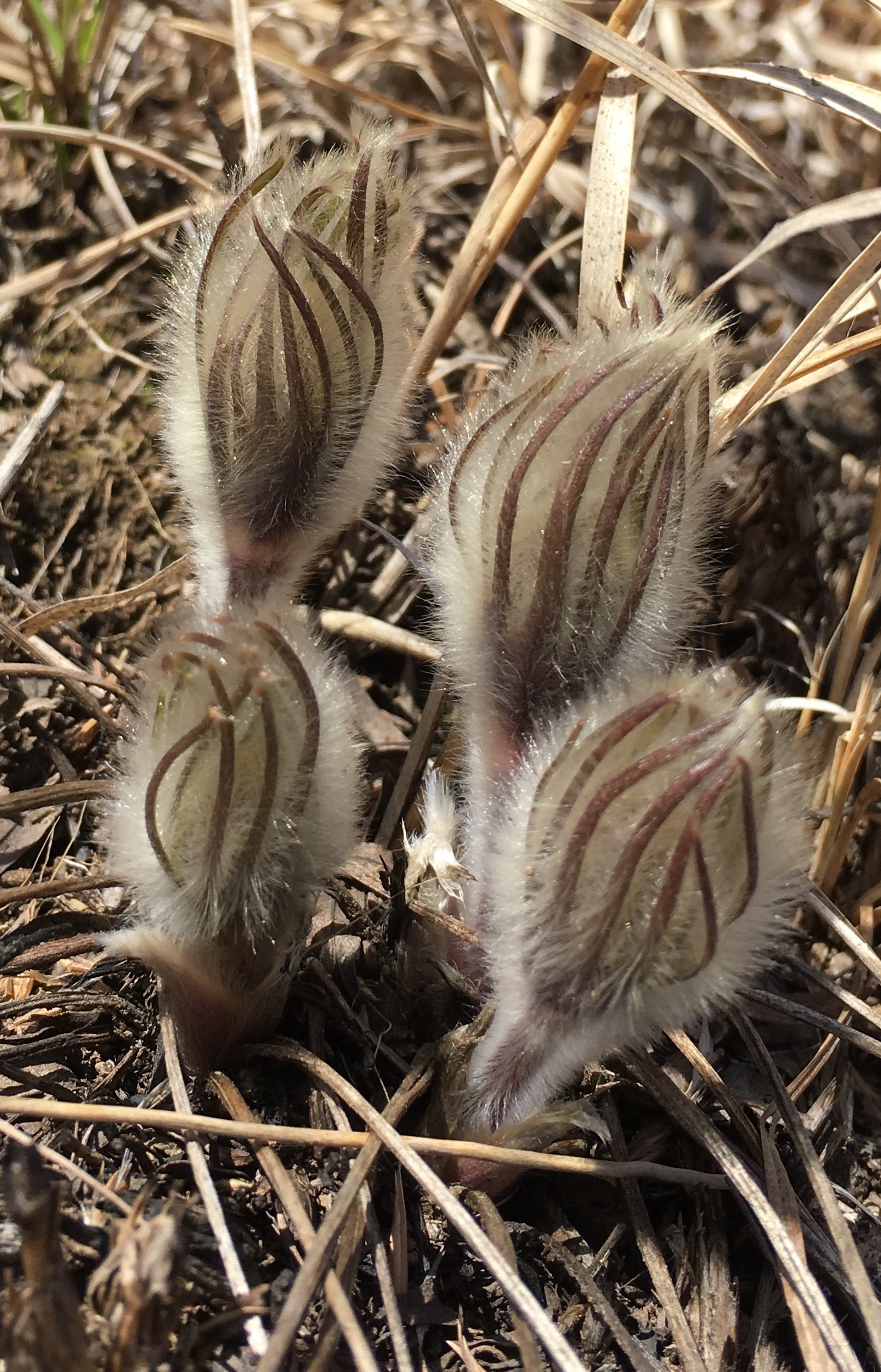 The following weekend, April 6, a few intrepid flowers had opened, but most were either still emerging or just on the cusp of doing so. The brown finger-like leaves clasping the flower buds had started to retract and turn green, but most of the pasques hid their golden treasure from me for another weekend. 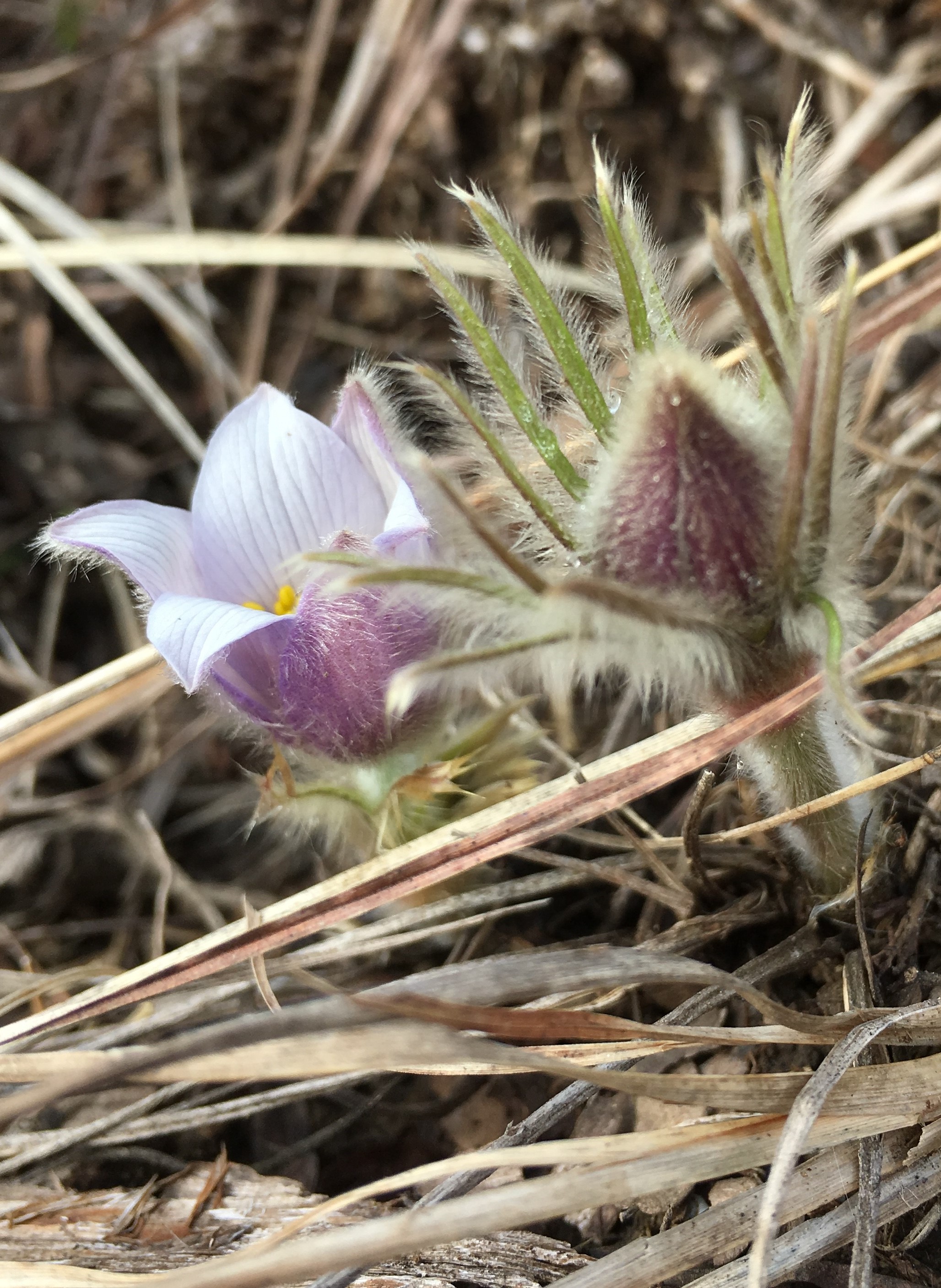 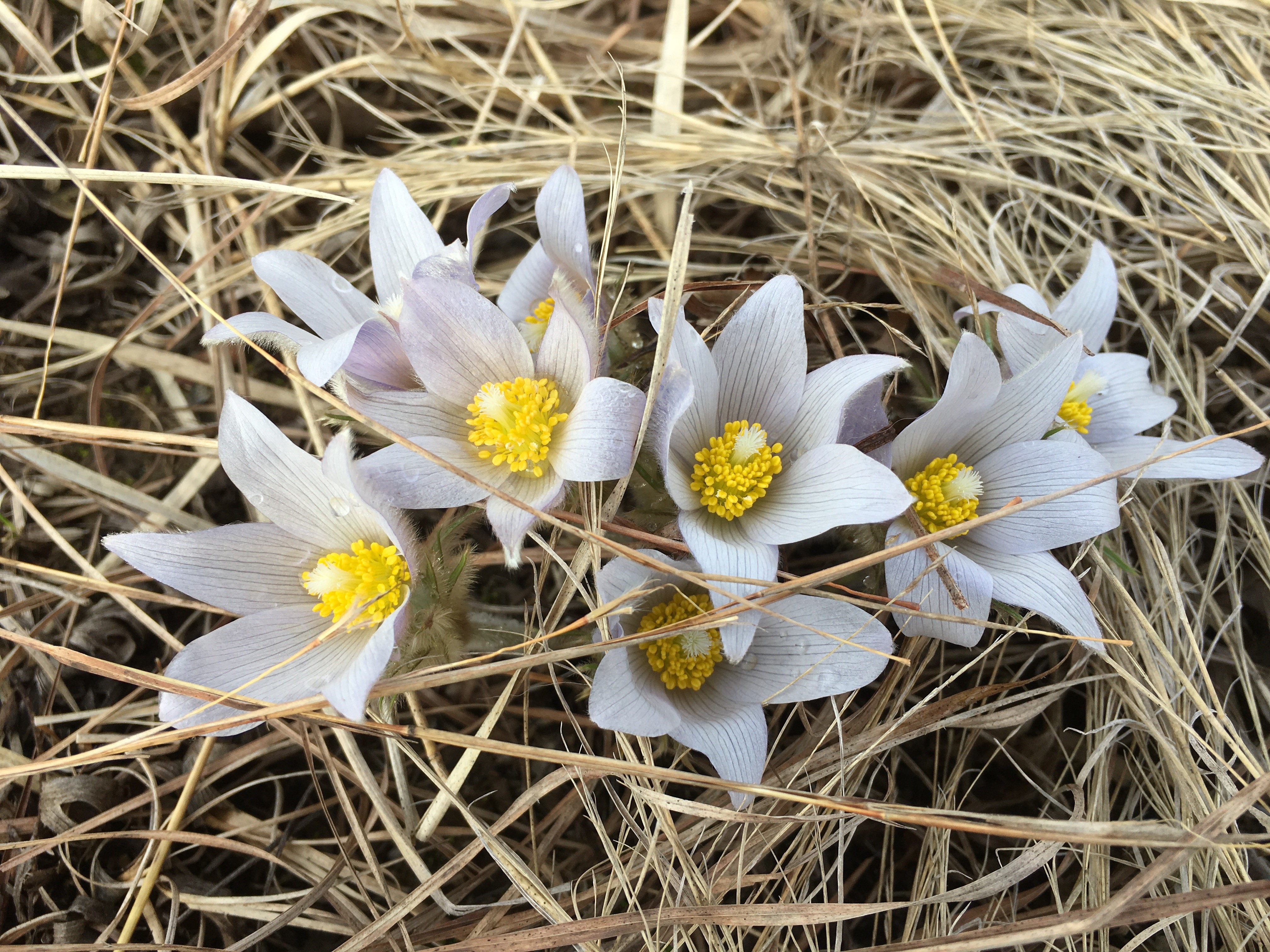 What started out as a warm week turned quite chilly by the following weekend. The flowering, though progressing, had not yet hit its peak when I returned on April 13. My hope was to get some pictures of pollinators using the pasques, but due to the cold weather, all I could muster was a fly nosing around one of the scattered opened flowers. 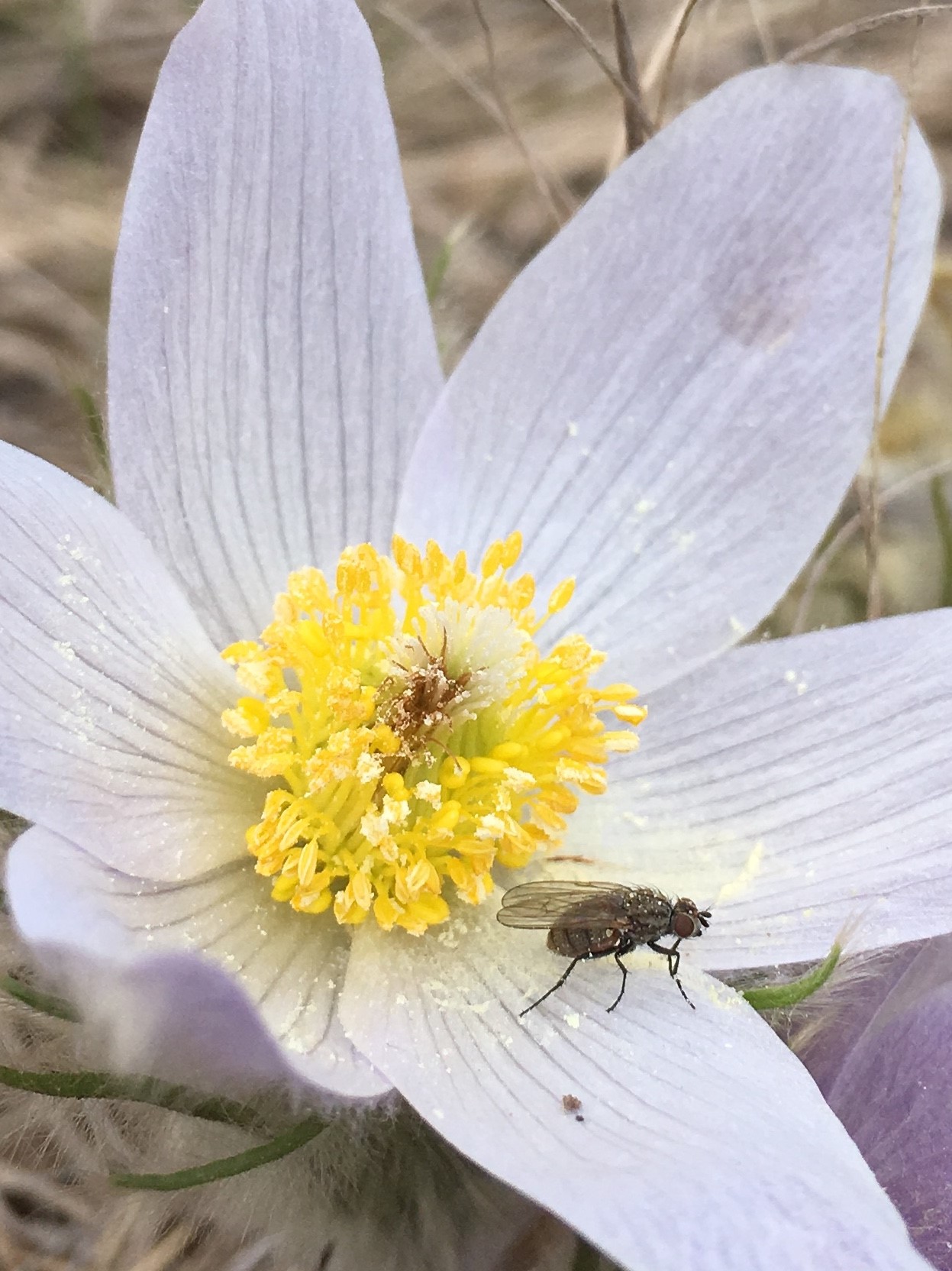 Having made plans to be out of town for the following Easter weekend, I doubted I would get to observe peak bloom. That weekend was lovely, with highs in the mid-80s in Omaha. As I suspected, when I returned on April 28, I found most of the flowers had already bloomed.

When pasque flowers are pollinated, the tips of the styles in the center of the flower turn reddish, and then the sepals close around it and eventually turn brown and papery. On some plants, the seeds had already developed to the point where they started to push out of their protective wrapping. 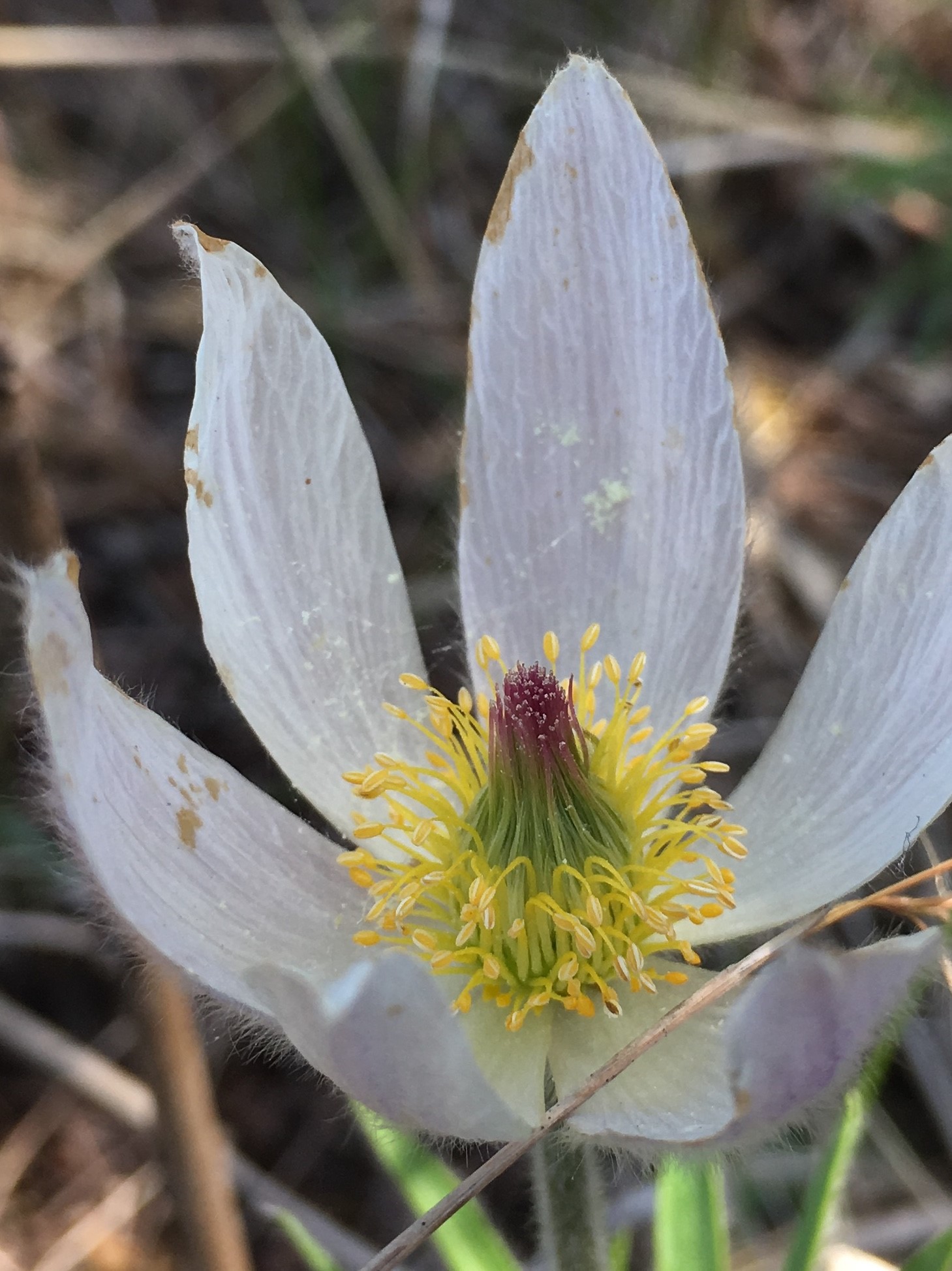 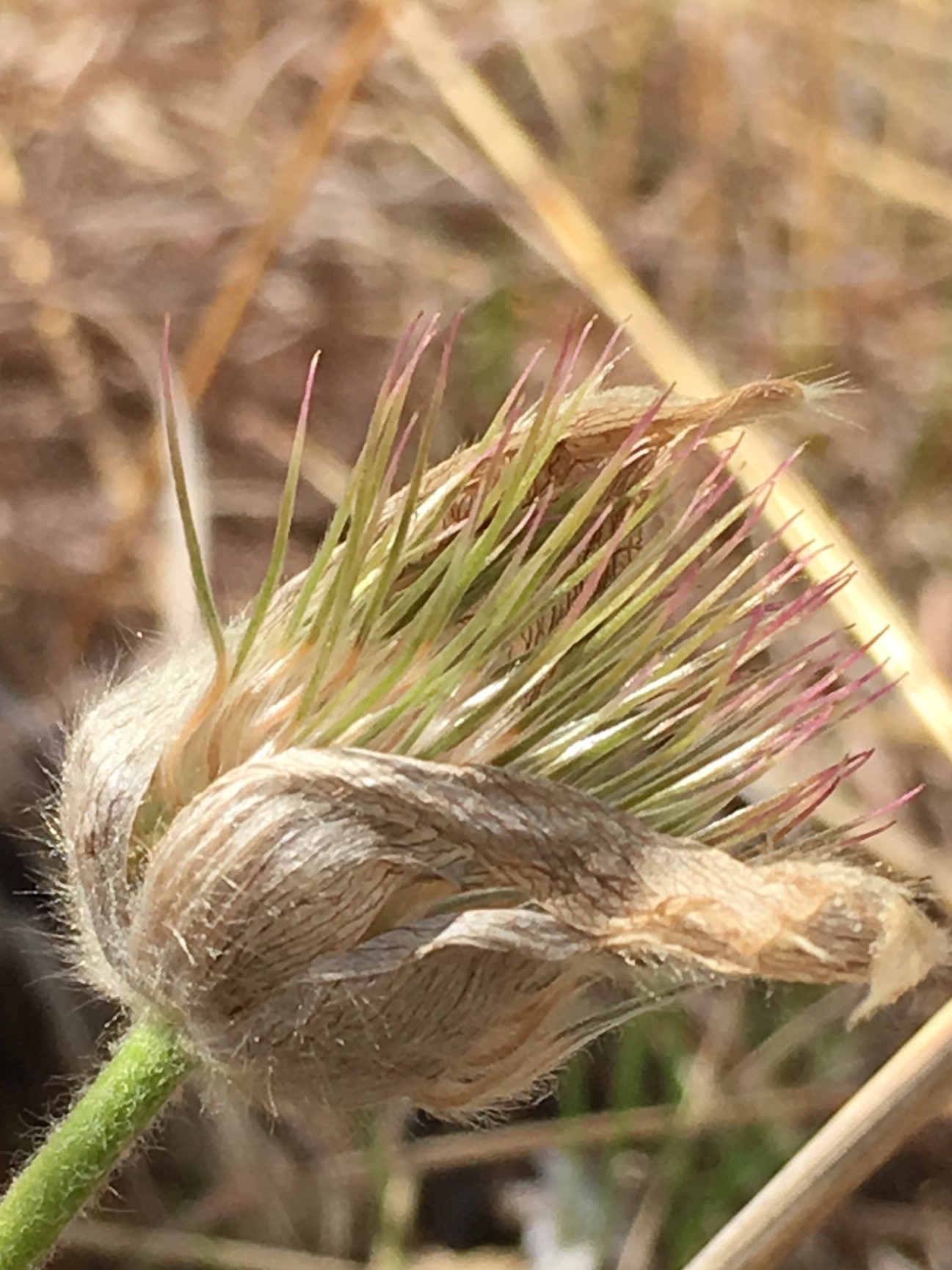 When I visited again on May 4, most of the flowers were spent and many had full seed heads on display. Several plants had been cropped by deer, and some were being fed on by a species of shield or stink bug (my best guess is the common Brown Stink Bug – Euschistus servus). The mature bugs apparently overwinter and feed on developing seeds and fruit when the emerge in the spring. 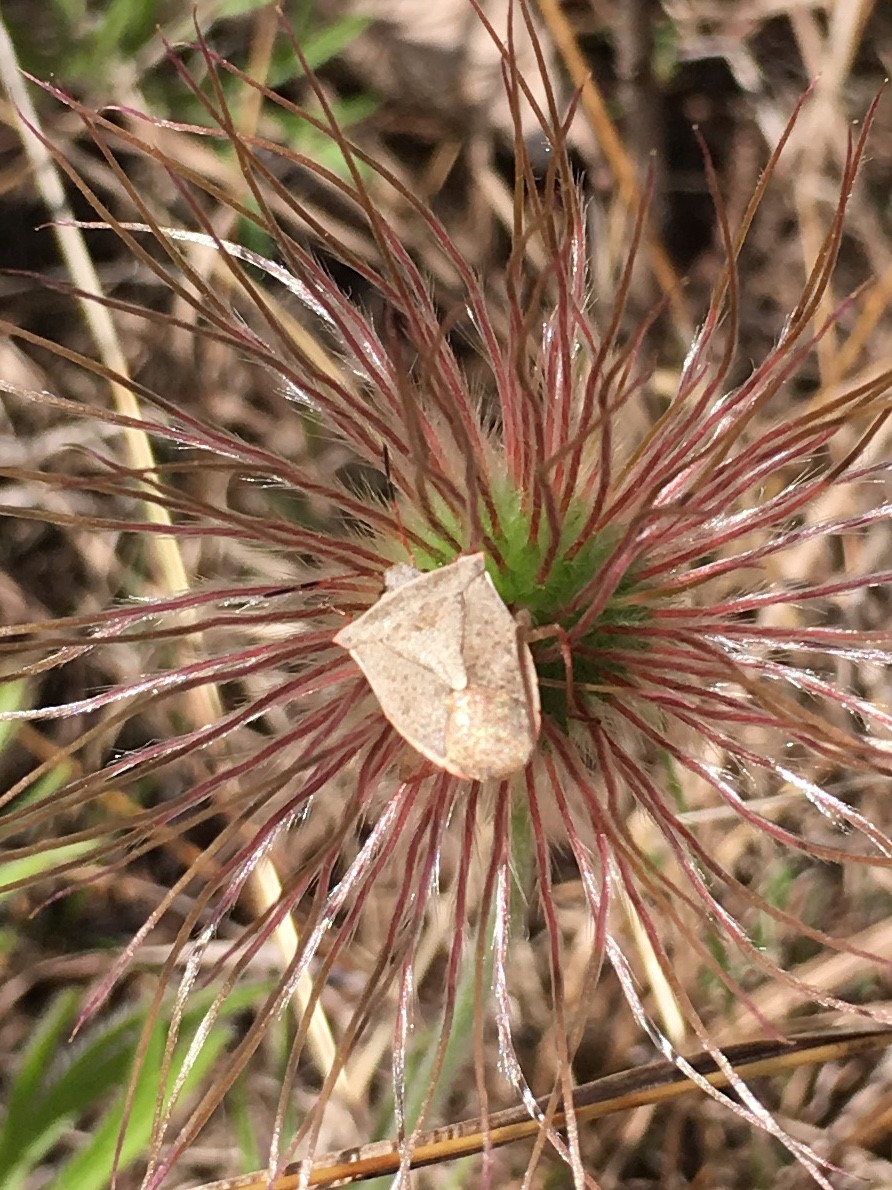 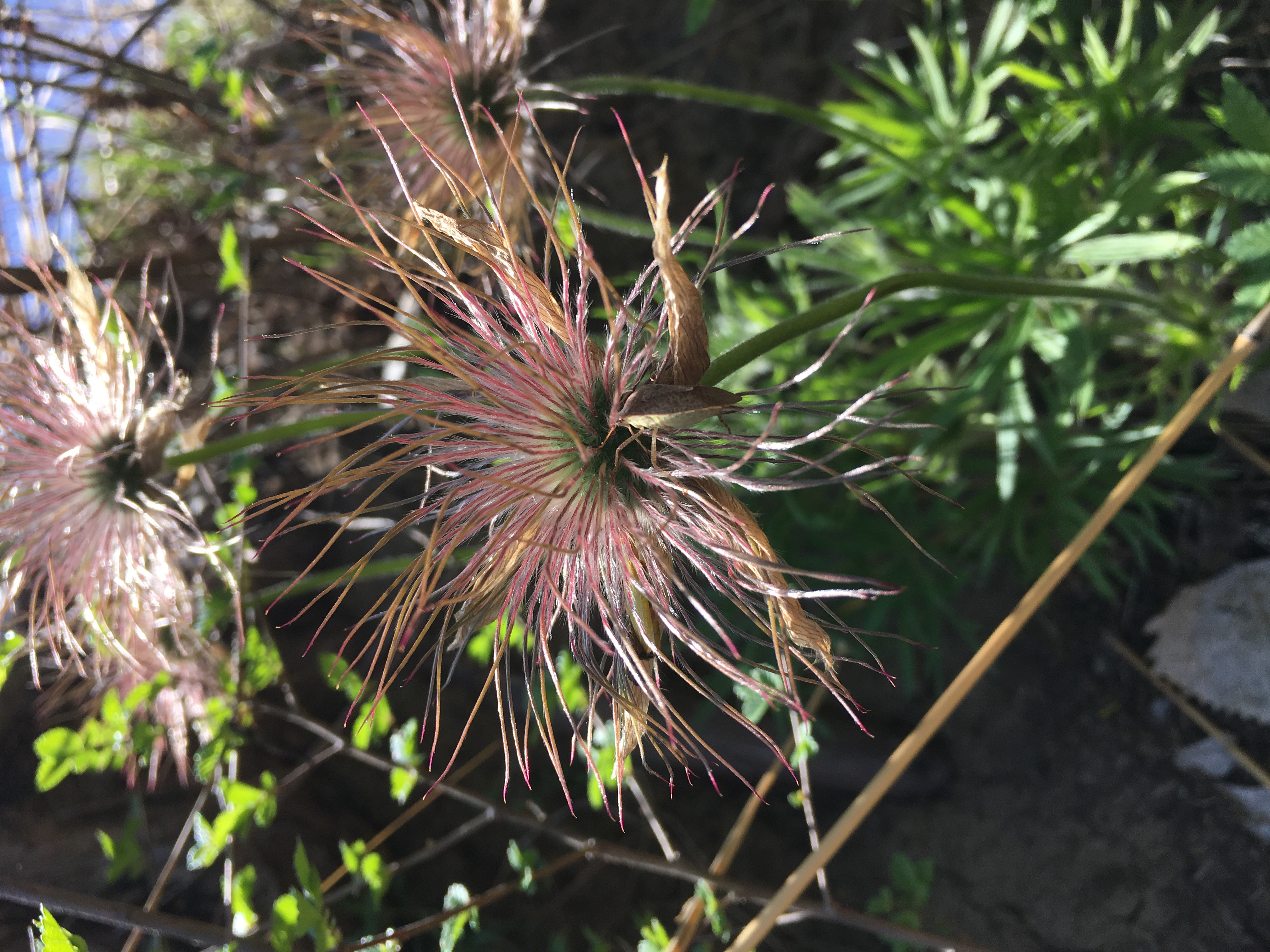 My overall assessment of this season of the pasque flowers: I got to most of the games, but I missed the championship. Because I didn’t witness the peak bloom this year, I feel like I missed an essential part of the season. I revel in seeing how much life the pasque flowers attract, from bees and flies, to caterpillars and butterflies, to ants and true bugs.

So, since I cannot offer many photos of this years’ visitors, I will share some from previous years, when my timing was more favorable.

Honeybee on a pasque flower: 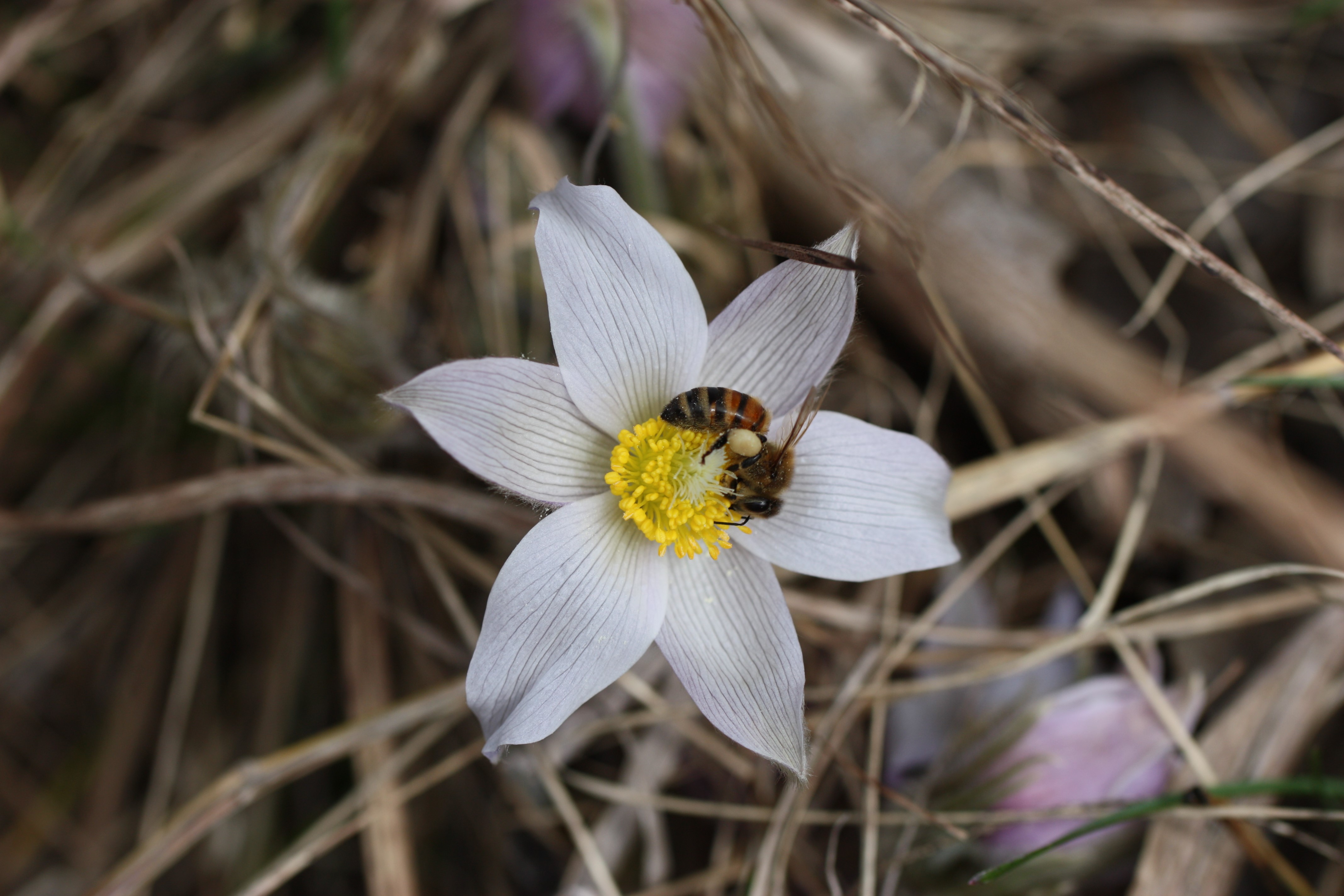 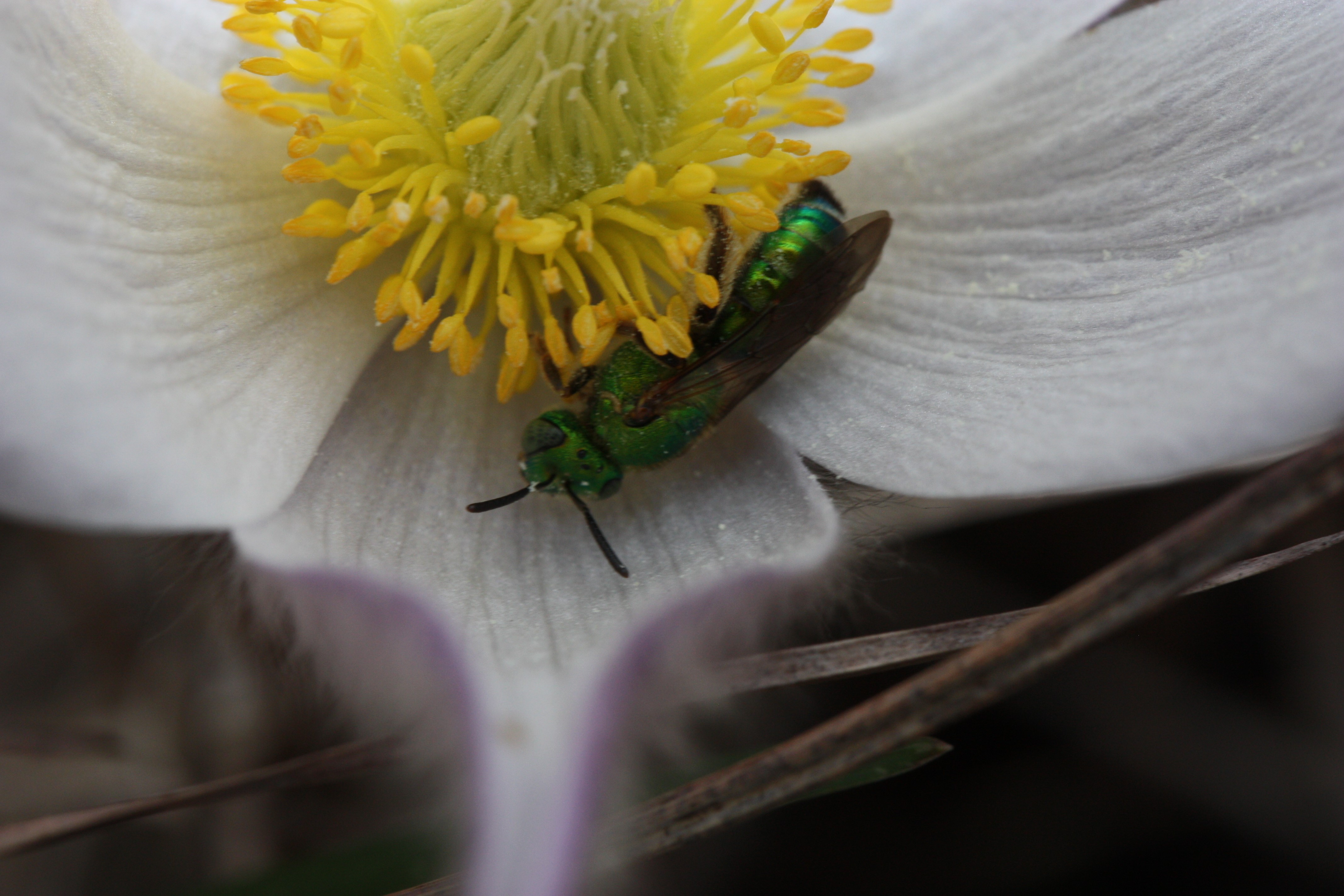 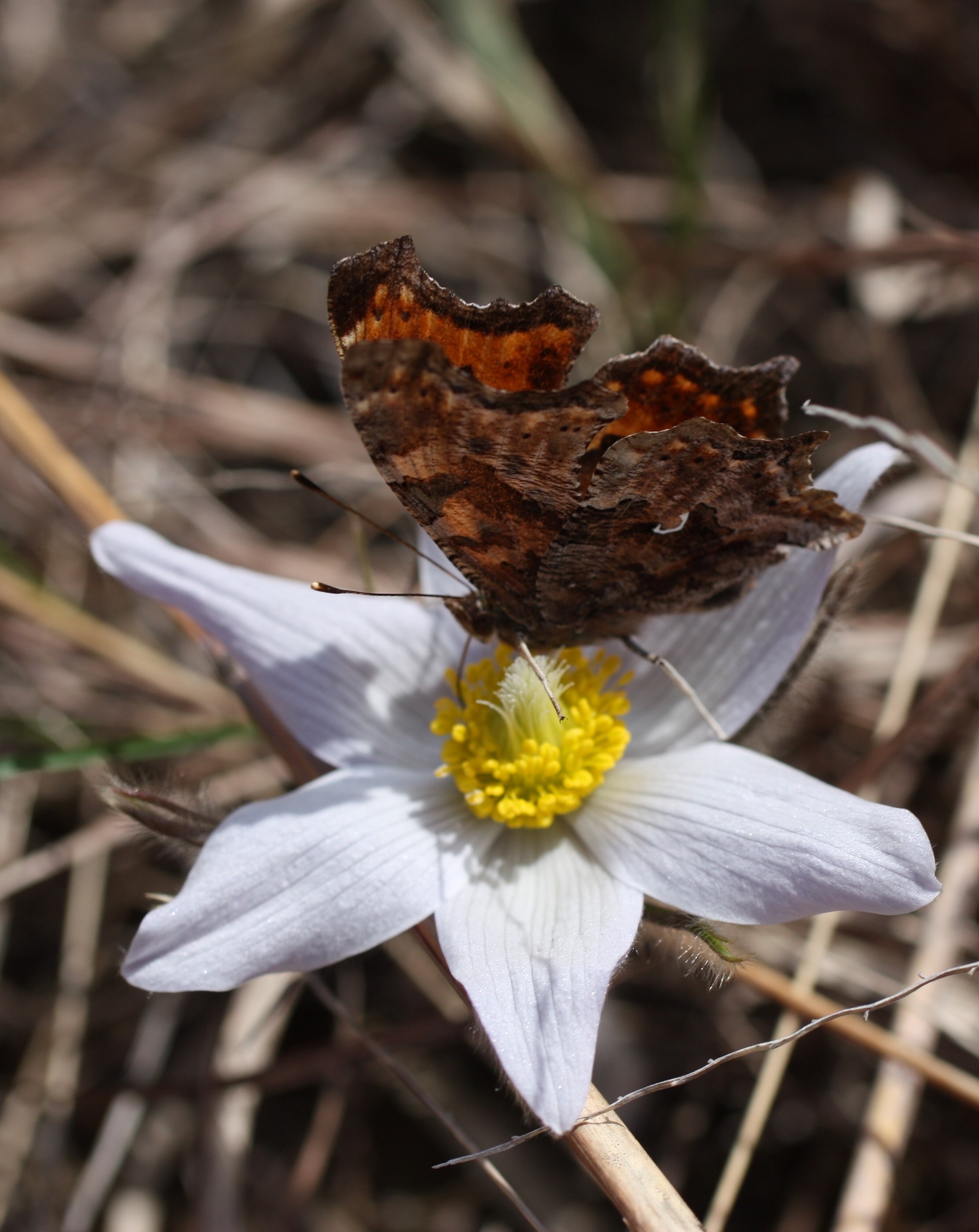 Like a true sports fan, I find myself already starting to think about next season.