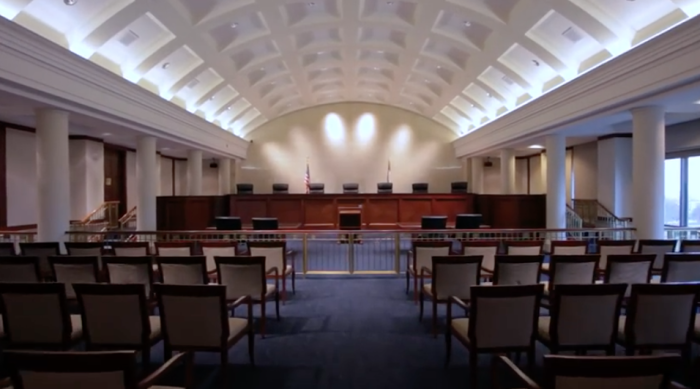 A Linn County attorney and eight Iowa House Democrats are challenging the new law that altered the composition of the State Judicial Nominating Commission and the term of the Iowa Supreme Court chief justice.

Republican lawmakers approved the changes as an amendment to the “standings” budget bill on the final day of the 2019 legislative session. Governor Kim Reynolds signed the bill on May 8, giving herself and future governors nearly unchecked power to choose judges for Iowa’s Supreme Court and Court of Appeals.

The plaintiffs are not claiming the legislature lacked the power to change the commission’s membership through a statute. Although most of Iowa’s judicial selection system is spelled out in the state constitution, which takes years to amend, a loophole in Article V, Section 16 specified the manner of forming judicial nominating commissions only “Until July 4, 1973, and thereafter unless otherwise provided by law.”

Rather, the lawsuit filed in Polk County District Court on May 14 cites two constitutional violations related to the process by which the law passed and one violation related to the separation of powers.

The first two claims stem from Article III, Section 29 of the Iowa Constitution:

The framers designed the section to prohibit “logrolling” (when lawmakers combine proposals that could not pass on their own merits into one bill), as well as “fraud and surprise” by sneaking language into an unrelated bill.

Lots of bills address multiple issues or code sections, and sometimes those deals come together in a way akin to logrolling. For example, to get a 2012 proposal for state solar and geothermal tax credits past the House Ways and Means chair, supporters agreed to add a sales tax exemption for auto body shops and car washes. The bill title mentioned all of those provisions. The Iowa Supreme Court has determined that a bill is deemed to cover one subject as long as its title reflects all of the major sections.

The plaintiffs in the new case note that “the Iowa legislature failed to amend the title to reflect the amendment” when Republicans added the revised judicial selection plan to the standings bill on April 27. Consequently, “Senate File 638 contained more than a single subject,” a “violation of the Iowa constitutional protection against logrolling.”

The second count asserts that in violation of the same section of the constitution, Senate File 638

failed to include in its title an accurate description of the subject matter of the bill, which included changes to Iowa’s Judicial Nominating Commission and selection and term of office of the Chief Justice of the Supreme Court.

Finally, the lawsuit maintains that the bill

violates Article III of the Iowa Constitution by dictating to a separate and co-equal branch of government how its leadership (Chief Justice) should be selected and the term of office.

The portion of Senate File 638 pertaining to changes in the selection and term of office of the Chief Justice should be found unconstitutional as a legislative encroachment on judicial powers.

Courts typically defer to legislatures by giving laws a presumption of constitutionality. The Iowa Supreme Court has held,

“Legislation will not be held unconstitutional unless clearly, plainly and palpably so. If the constitutionality of an act is merely doubtful or fairly debatable, the courts will not interfere.”

Furthermore, at least four of the current seven Iowa Supreme Court justices are conservatives who may desire to choose a new chief justice in 2021, as Senate File 638 allows. Under previous law, Chief Justice Mark Cady’s term would have run through 2024.

Of the attorneys or constitutional law specialists whom I consulted regarding this lawsuit, none thought it was likely to succeed. However, several thought at least one claim potentially had merit.

Rush told Bleeding Heartland in a May 15 e-mail,

I am tired of small but politically powerful interest groups and compliant legislators cramming short-sighted, special -interest legislation through regardless of public protest. The latest is this unconstitutional shoe-horning into a law on spending a bill changing how the Iowa Supreme Court is appointed. Why can’t a law stand or fall on it’s own, as the Iowa Constitution clearly requires? Why seek to evade our Constitution by packing a change in the court-selection law amidst unrelated, uncontested, and unobjectionable routine bills? The point was to conceal this harmful legislation from everyday Iowans, even if doing so meant violating our state’s Constitution.

In a 1986 case, Western International v. Kirkpatrick, the Iowa Supreme Court struck down part of a law that mostly involved technical code corrections, but also included substantive changes to the appeal process for workers’ compensation claims. Citing past case law on the single-subject clause, the majority opinion noted, “Two subjects may not be covered by one act unless the subjects can be considered related to or connected with one another.”

Arguably, substantive changes to Iowa’s judicial nominating system have nothing to do with appropriations, which was the subject of Senate File 638.

On the other hand, Iowa lawmakers have long used the standings bill as a “Christmas tree” for nearly anything on their wish lists that didn’t pass as a stand-alone bill. The Supreme Court may be reluctant to strike down Senate File 638 on these grounds, thereby casting doubt on many other provisions in previous standings bills.

The 1986 Western International opinion reviewed the precedent regarding the Iowa constitution’s reference to bill titles.

In that case, the majority found the relevant sections of the contested bill unconstitutional because its title

states it is a code corrections bill altering current practices, but does not enlighten the reader as to what practices are being changed. There is no indication in the title of House File 2066 that the enactment effected a change in workers’ compensation law or in appellate procedure involving workers’ compensation cases and the Iowa Administrative Procedure Act. These provisions are buried in the middle of a sixty-one section enactment which could fairly be said to make otherwise lexicographical changes. The reader of the title is not informed that a drastic change in the workers’ compensation law will result from this bill’s enactment. The title of House File 2066 clearly is vague and misleading, thus violating the mandate of article III, section 29.

The title of Senate File 638 reads,

That title did not convey to the public that the bill would affect the State Judicial Nominating Commission and the term of the chief justice.

Then again, if we presume statutes are constitutional, the court may find this title was broad enough (“legal and regulatory responsibilities” and “other properly related matters”) to encompass such changes.

Intuitively, it seems wrong for the legislative branch to tell the Iowa Supreme Court how long the chief justice’s term should be. A few attorneys believe this argument has legs.

But several attorneys I asked about this provision shortly after the legislature adjourned told me it probably was not a separation of powers problem. The bill did not allow state lawmakers to select the chief justice, nor did it limit the number of two-year terms any person could serve as chief justice.

In addition, Article V, Section 17 of Iowa’s constitution states, “Members of all courts shall have such tenure in office as may be fixed by law.” Iowa Code Section 602.4103 has long established the term of the chief justice. Senate File 638 merely shortened the length of time, from the selected justice’s full term in office to two years.

Professor Todd Pettys of the University of Iowa College of Law has written that the U.S. Supreme Court justices should be able to select their own chief. When I asked Pettys about Article V, Section 17, which allows judges’ tenure to be “fixed by law,” he posited,

Will courts consider the merits of this case?

Before the Polk County District Court can consider the plaintiffs’ legal arguments, the judge will have to rule on a motion to dismiss. Many lawsuits are tossed for lack of standing to bring the case.

State lawmakers would presumably have grounds to challenge the process by which the law was adopted. For instance, they could claim they were confused about the substance of Senate File 638, because Republican lawmakers didn’t amend the title. Defendants may argue it’s not credible for legislators to say they were defrauded or taken by surprise, since the judicial selection changes were debated on the House and Senate floor before the April 27 votes on final passage.

It’s less clear whether legislators or Rush (as an attorney who appears in Linn County courts) can demonstrate that they suffered some injury due to the new composition of the State Judicial Nominating Commission, or the changes to the chief justice’s term. With respect to shortening the term of the chief, Pettys speculated,

Although it’s possible a court would make an exception to its usual rules of “standing,” typically a court requires plaintiffs to show that they’re being harmed by the law that they are challenging. I will be interested to see whether the court pushes the plaintiffs to give an answer to that question in this case and, if so, what their answer will be.

When I asked Rush about a possible challenge to plaintiffs’ standing to sue, he said they are amending the suit to add another Polk County legislator and Leon Spies as plaintiffs. Spies is an attorney who was recently elected to serve on the State Judicial Nominating Commission, beginning on July 1. He’s not directly affected by the changes to the chief justice selection, though.

I will update this post when further details become available.

UPDATE: Martin Diaz joined the plaintiffs on May 23. He has served on the State Judicial Nominating Commission since 2011, and his term expires on July 1. In a statement, Diaz said he initially “hesitated to be involved” in the lawsuit “because I do not want to undermine my colleagues on the Commission and those to come.”

On the other hand, as a lawyer, I’m a strong believer that [it] needs to be constitutional and if Senate File 638 is unconstitutional then I have a duty to step up and assist in testing that legality.

Diaz noted that his participation may not be needed, since others have brought the case.

However, it is my understanding that the defendants intend to argue that the current plaintiffs do not have “standing” to bring this action. If that is true, then the lawsuit could be dismissed on what the citizens of Iowa may consider to be a technicality. More importantly, the merits of whether Senate File 638 is constitutional would never be tested. That is an unacceptable result. […] I believe it is my obligation to assure that the lawsuit that has been brought is resolved on its merits and not on a procedural defense.

Click here to read the full statement from Diaz outlining his reasons for signing on as a plaintiff.