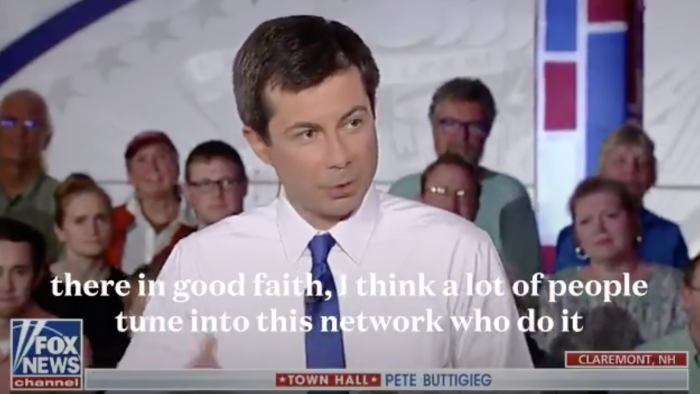 Our dog sitter is a wonderful young man with an engaging smile, modest persona and, above all, a tremendous caring spirit. He also watches Fox News.

An estimated 2.5 million Americans get at least part of their prime-time news and information from Fox News. Which makes it a dynamic “D-oh!” why most Democratic Party presidential nominees refuse to accept the network’s invitation to appear in a town hall format, hosted by one of their news anchors, not one of their right-wing talking heads.

Yes, Fox News launched a platform for right-wing commentary and often slanted reporting. But it also gave a voice to those Americans who felt, rightly or wrongly, that they had been forsaken by government and ignored by a media uncaring about people living between the coasts. William Poundstone, author of Head in the Cloud: Why Knowing Things Still Matters When Facts Are So Easy to Look Up, explained the appeal of Fox News this way:

Fox is small-town/suburban and populist. . . . Fox trades in stories about the venality of big government, liberal overreach and little-guy heroes of the heartland.

And the Americans who eat up those stories are the voters every presidential candidate, Republican and Democrat, needs. So why alienate yourself from them, the way the Democratic National Committee — three of whose initials can be found in the word “dunce” — managed to do in March.

More recently, Elizabeth Warren turned Fox down in a stinging tirade, describing the network, and by inference, those who view it, as “a hate-for-profit racket” and affording “a megaphone to racists and conspiracists.”

Bill Maher, as progressive a commentator as you’ll meet, blasted Warren on his show. “She’s right, of course that’s what Fox News [is],” Maher admitted. “But it’s also where people who vote are. I don’t think people realize this: 43 percent of FOX News viewers — only 43 percent — say they are conservative Republican. 10% say they’re liberal Democrats. . . . Isn’t it better to talk unfiltered to people like Bernie Sanders got to do than to have it filtered through Sean Hannity?”

Pete Buttigieg agreed. “. . . I think a lot of people tune into this network who do it in good faith,” the South Bend mayor said on a Fox News town hall last weekend. Democrats, he added, “can’t blame” Fox viewers if “they are ignoring our message because they will never hear it if we don’t go on and talk about it.”

Mayor Pete was a hit. Jennifer Rubin praised Buttigieg’s appearance in The Washington Post: “Projecting the same calm, incisiveness and wit that have impressed other audiences, he won enthusiastic applause and a standing ovation.” Read her entire piece, and click on the embedded program segments.

Look, I get it — if you’re not secure in your own skin, you avoid the arrows that can puncture it. And maybe that’s the issue with the Democratic candidates: that they aren’t secure and comfortable about who they are, and where they stand. And why they aren’t trying to convince an American with an engaging smile, modest persona and a tremendous caring spirit to vote for them.