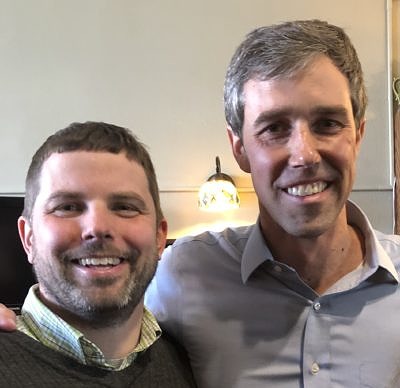 Why I'm caucusing for Beto O'Rourke

Nate Willems: "Instead of looking for a candidate who appealed to my own sense of identity, I searched for the Democrat who is simply the best leader for Iowa." -promoted by Laura Belin

I represent unions, injured workers, and workers with employment law claims. The work will drive you nuts and make you madder than mad, but the victories are incredibly rewarding. So, it did not surprise any of my friends when I would tell them I was excited by leaders like Sherrod Brown talking about the dignity of work. Senator Brown has a first-rate record of putting working families first, and he’s going to continue doing that in the U.S. Senate.

As we got into the spring and presidential candidates began popping up everywhere, I began to take stock of our wide, diverse field. I am a Tom Harkin/Paul Wellstone kind of Democrat, and I knew I was looking for a Democrat whose body of work as an elected official lined up with what I do as a lawyer. That proved to be harder than I thought. Ultimately, I decided I would support whichever candidate excited me and made it a priority to listen to working people.

So like everyone else, I opened my eyes and ears to listen to the growing field of candidates. Beto O’Rourke came through town. It is very difficult to describe the energy and the hopeful optimism his appearance engenders. It is hard to describe it in any remotely persuasive manner.

“He has it.” “You know it when you see it, and he has it.” I found myself repeating these things over and over to people. Eventually it became: “I am going to caucus for Beto.”

Suffice it to say, telling people I support the former member of Congress from Texas, who is still working to get his name out there, has garnered a little bit of a surprised reaction. I answer those questions the same way each time: “Go to one of his events, talk to him in person, and you’ll see what I see.”

I want a candidate who lets you see who they are. I am less interested in a candidate who sticks to the script, who I can observe making sure they hit every fashionable Democratic talking point. At an event, the real life Beto O’Rourke has genuine conversations with people, and I believe it is the real thing. In short, Beto has authenticity.

He can also genuinely excite, motivate and activate people. Democrats do not get elected president because it is their turn. We win when our candidate inspires us and builds a grassroots movement in every part of our country. A powerful dislike of Trump alone is not enough to fill the phone banks and canvassing shifts. Our party needs belief and purpose from its leader to function at a sufficiently high level to win the presidency. Beto will inspire and lead a fully capable and competent Democratic Party.

But Nate, are you telling me Beto O’Rourke is the only real person who can inspire our party? No, I am not. Other candidates can exude authenticity and inspiration to segments of our party and segments of America, but Beto is the candidate than can inspire the entirety of our party. There are 254 counties worth of diversity in Texas, and during his U.S. Senate run against Ted Cruz, Beto campaigned in them all.

There are 99 counties worth of voters in Iowa, and in 2020 Beto will compete for votes in every single one on behalf of all of us. He’s already visited more counties than any other presidential candidate this year. Nobody has a better ability to build a movement in every corner of this country for progressive change.

Maybe it was a good thing I did not find a traditional “labor Democrat” to support. Instead of looking for a candidate who appealed to my own sense of identity, I searched for the Democrat who is simply the best leader for Iowa. That is why I am going to caucus for Beto O’Rourke. Join us at betoorourke.com/volunteer .

Nate Willems served in the Iowa House from 2009 through 2012 and practices law with the Rush & Nicholson firm in Cedar Rapids.