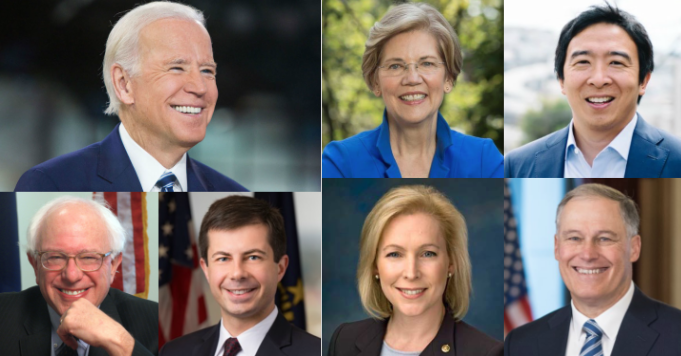 Ed Fallon is a former Democratic state lawmaker and “agitator in chief” at Bold Iowa. He backed Bernie Sanders shortly before the 2016 Iowa caucuses but has not endorsed a 2020 presidential candidate. -promoted by Laura Belin

Remember how the Republican field shifted in the 2012 and 2016 Iowa caucuses? The lead changed so many times that emergency rooms across Iowa saw a drastic increase in whiplash cases.

Ok, I made that last part up. But seriously, remember one-time 2012 front runner Herman Cain? I didn’t think so. How about 2016 flash-in-the-pack leader Ben Carson? Or shoe-in-for-the-nomination Scott Walker? And oh, how I miss Michele Bachmann.

The horde of Democrats running for president this year may or may not experience the same level of volatility, but we’ve already witnessed some surprises. A year ago, how many of us had even heard of …

PETE BUTTIGIEG? This spring, polls had Buttigieg running third among Iowa caucus-goers. He’s now fourth, and downward may well be his trajectory. Buttigieg is a captivating speaker. But my guess is he was Iowa Democrats’ first flavor of the month. With so many flavors to choose from and voters hungry for change, another new and exciting prospect is likely to slip past Buttigieg. But, it won’t be …

JOE BIDEN. Name recognition has carried Biden thus far, but his descent has begun. There’s more and more chatter about the astounding inconsistencies between Biden’s past record and his rapid transition to progressive policy advocate. Case in point: Biden’s excellent climate plan, which magically morphed out of his intent to find “middle ground” on climate. How’d that happen? Simple: Biden’s advisors discovered that a milktoast climate strategy would bomb with the base. So they quickly retooled and spit out a plan that looked, well, remarkably like the progressive climate proposals of other candidates.

Few Iowans are fooled. Besides Biden’s climate-plan flip-flop, his recent boast about US oil production hangs around his neck like an endangered albatross (sad but true, Climate Change Threatens Survival of Albatross):

Ouch. My prediction: 2020 will be the third time Joe Biden fails in a presidential primary. Meanwhile, on the other side of the sincerity spectrum …

BERNIE SANDERS. Sanders inspires like no other candidate. It’s not just his rhetoric. It’s his consistency over the years. Unlike Biden, Sanders means what he says. His 2016 campaign changed the debate, forcing even Hillary Clinton to pretend she was progressive. Sanders’ 2016 message has set the tone for 2020.

Yet … the Sanders campaign claims to have 24,000 volunteers. Where are they? This army of believers had better deploy soon because Sanders can’t simply do well in Iowa. He has to win Iowa. No doubt, die-hard Sanders supporters will turn out to caucus for him even in a polar-vortex-induced blizzard with a windchill of -79°F. (That is, in fact, the coldest windchill I’ve experienced in Iowa. Take note, campaign workers from milder climes.)

Sanders essentially tied Clinton in the 2016 Iowa caucuses. But he should have won. In various other states, we can blame the Democratic establishment for stacking the deck against Sanders. But not Iowa. Here, Sanders has only himself to blame for not beating Clinton, as I recall story after story of wannabe volunteers drooling to help but unable to get even a response from Sanders’ people.

His campaign needs to figure out a way for that not to happen again. Logging 24,000 volunteers on paper is one thing. Effectively managing them in the field is a whole ‘nuther ball game.

The even bigger challenge for Sanders is that most of those who supported him in 2016 seem willing to give other candidates a serious look. Maybe it’s not too late for Sanders to bring a majority of his 2016 supporters home, but the competition is stiff, especially …

ELIZABETH WARREN. Who knew that Iowa caucus-goers actually cared about issues? Well, yeah, we do — and Warren is proving it. She’s strong on policy with a solid track record to back it up. Despite what the Establishment would have you believe, issues matter, both in the primary and general elections.

Warren’s star continues to rise, and not just because of her strength on policy. She’s running the ground game that Sanders failed to fully mobilize in 2016 and has yet to mobilize this time around. Warren also has survived a few bumps, and that bodes well for her durability.

But this election season is still young. Plenty of candidates are poised to see their prospects improve, such as …

ANDREW YANG. No one does a better job at messaging their uniqueness than Yang. He’s built a deep following nationally, and his peeps are all over social media. Criticize their man and the Yang Gang’s cyber-hammer comes down hard. I’ve got 60+ communiques to prove it.

Political capital has a lot to do with momentum, and Yang is building it slowly and steadily. He’s poised to be the flavor of the month, though I’m not sure he can ride that wave to a top-three, or even top-five, finish in Iowa. As good as he is, there is one candidate who has Yang beat when it comes to clever and creative, and that is …

KIRSTEN GILLIBRAND. Many have written off Gillibrand. That’s a mistake. If I were to vote for a candidate for president based on the desire to have someone fun in the White House, it’d be Gillibrand. The Ranch dressing thing. The dressing like a drag queen thing. Beating the college student in arm wrestling. What’s not to love about all that in a world leader? “My president is stronger than your president and looks great in drag.” Gillibrand would restore America’s credibility on the world stage in ways Donald Trump could never imagine.

Gillibrand is no policy schlep either. When pushed by Bold Iowa’s bird dogs to feature climate more prominently on her website, she did it — immediately! Her embrace of the urgency of the climate crisis speaks well of her policy priorities.

But when it comes to climate, one candidate has Gillibrand and all the others beat …

JAY INSLEE. Not only is Inslee laser-focused on climate, as governor of Washington he’s got a solid record of action to back it up. Given that the climate crisis is Democratic voters’ top concern and that the impacts of climate change are likely to increase over the summer and fall, Inslee should see his stock rise. But he needs a ground game in Iowa. He needs to talk more about his track record on a range of issues and what he would do to address them as president.

Finally, Inslee — and all the candidates — must address the one consideration on voters’ minds even more pressing than climate. That is …

WHO CAN BEAT TRUMP? Trump will only be defeated by a candidate who can’t be pegged to the status quo. That rules out Biden. It’s remarkable to me, astounding in fact, that anyone still believes that a self-described “centrist” (read “corporate-friendly”) Democrat stands a chance against the madcap faux populism of Crazy Uncle Donald. Fretting over the criteria of electability fed to us by insider pundits who take their orders from the Establishment will give us the same result we got in 2016.

You want electability? Nominate a candidate who’s a decent person, whose rhetoric and record on key issues is strong and consistent, and who demonstrates a solid commitment to tackling the existential threat of climate change. That’s how we beat Donald Trump and assure leadership in the White House that represents the public interest, not the corporate thugs who’ve held sway over America for far too long.