What needs to happen for J.D. Scholten to beat Steve King (2020 edition)

Art Cullen reported in the Storm Lake Times on July 31 that while J.D. Scholten "has not formally announced whether he will run" for Congress again in Iowa's fourth district,

“Let me put it this way,” he said. “Last cycle we hoped to win. This cycle we intend to win.”

I assume that means Scholten is in.

He swore off running against Sen. Joni Ernst.

It's time to revisit Bleeding Heartland's 2018 analysis of what it would take for Scholten to win a district with a partisan voting index of R+11. I see six essential elements to an upset victory:

The biggest factor is wholly outside Scholten's control. In a district where Republicans outnumber Democrats by more than 70,000, only a weak GOP nominee could lose.

To appreciate how badly King underperformed, click on any county on this interactive map to bring up local results for the 2018 races for Congress and governor. Governor Kim Reynolds received a substantially higher vote share everywhere--even in King's home county (Sac).

King won with less than 50%

Scholten won with less than 50%

Here are the same results in a table. Each county's line contains the 2018 vote numbers for Congress and governor. I listed the 23 counties where King has held town hall meetings this year at the top, in chronological order by date of the meeting. After the line break, other counties are in descending order from most to least ballots cast in last year's general election.

Another sign of King's residual weakness: his share of the vote in 2016 was 61.2 percent, barely more than Donald Trump's 60.9 percent in the IA-04 counties. Iowa's other three U.S. House representatives did significantly better than their party's presidential nominee in 2016.

Cullen quoted Scholten as saying he expects King to win next year's GOP primary. I agree, though I feel less sure of that outcome than I did earlier in the year.

Assuming King fends off State Senator Randy Feenstra and other GOP challengers, what else does Scholten need?

Academics and Democratic and Republican analysts agree that 2020 turnout could be the highest in a century.

If you'd told me before last November that 147,246 people would vote for Scholten, I would have guessed that would be enough to win. But turnout for Iowa's 2018 election far surpassed the typical midterm level.

Official results show 387,555 residents of the IA-04 counties cast ballots in the 2016 general election. Surely a much larger number will vote in 2020. I don't know what a win number for Scholten would be, but he'd likely need to exceed 200,000 votes.

Statewide statistical reports show that about 76.9 percent of registered Iowa Democrats cast ballots in the 2012 general election, and 74.0 percent did so in 2016.

Scholten can't win just by maximizing Democratic turnout, but strong GOTV would greatly help his cause. Having Trump on the ballot should take care of this point.

4. A large number of Republicans defecting from King.

Trump should inspire very high participation by his supporters as well as his opponents. Given the GOP's voter registration advantage in IA-04, Scholten needs to bring a lot of Republicans over to his side.

Assuming 80 percent of registered Republicans vote next November, at least 155,000 Republicans in the IA-04 counties will cast ballots. Bump that up to 165,000 if Trump brings turnout to 85 percent. If King held on to 90 percent of his own party's voters, that would take him a long way toward a tenth term.

Scholten couldn't have come so close in 2018 without a lot of crossover votes from disaffected Republicans. And remember, 2020 will be the first presidential election since Iowa GOP lawmakers eliminated straight-ticket voting. That's going to hurt King, because thousands of people who might have filled in the Republican oval will now have to choose a Congressional candidate. Every Republican who leaves that ballot line empty or votes for a third-party candidate is half as good as a Republican who marks a ballot for Scholten. The Libertarian nominee in IA-04 received 2 percent of the vote in 2018, and an independent candidate won 0.6 percent.

Picking numbers out of the air, let's say 10 percent of GOP voters support Scholten in November and another 15 percent decline to vote for King. That scenario still leaves Scholten below 125,000 total votes.

One question mark is how much support King would get from the party establishment. Would the National Republican Congressional Committee cut him off, as they did in 2018? Reynolds and U.S. Senators Chuck Grassley and Joni Ernst have all said they will remain neutral in next year's GOP primary. If King becomes the nominee, I assume they will endorse him. But I doubt they will spend a lot of time campaigning for him. Re-electing Ernst will be the Iowa GOP's top priority.

5. A solid majority among independents.

Historically high turnout of around 70 percent would translate into at least 130,000 people affiliated with neither Democrats nor Republicans voting in the IA-04 counties. To reach a majority of all votes cast, Scholten would need a commanding margin among no-party voters, probably at least two-thirds of them.

When I first pulled my thoughts together on this subject in June 2018, it wasn't clear that Scholten could raise enough money to campaign effectively in 39 counties spanning five media markets. We know the answer now. Scholten raised more than $3.2 million during the 2018 cycle, most of it in the last few months before the election. He'll have more early financial support this time, having shown he can compete with King.

The Democratic Congressional Campaign Committee spent almost nothing in IA-04 last cycle. That will change if Scholten faces King again. The DCCC put this district on its target list in January. According to Cullen, "DCCC Chair Rep. Cheri Bustos of the Quad Cities is enthusiastic about Scholten and courted him to run again."

Meanwhile, King barely has enough in the bank to keep paying his staff. He'll need to spend whatever he raises before next June to fight for the GOP nomination. Entrenched incumbents can usually outspend their opponents, but that is unlikely to be true for King in 2020.

And here's the map of Iowa media markets: 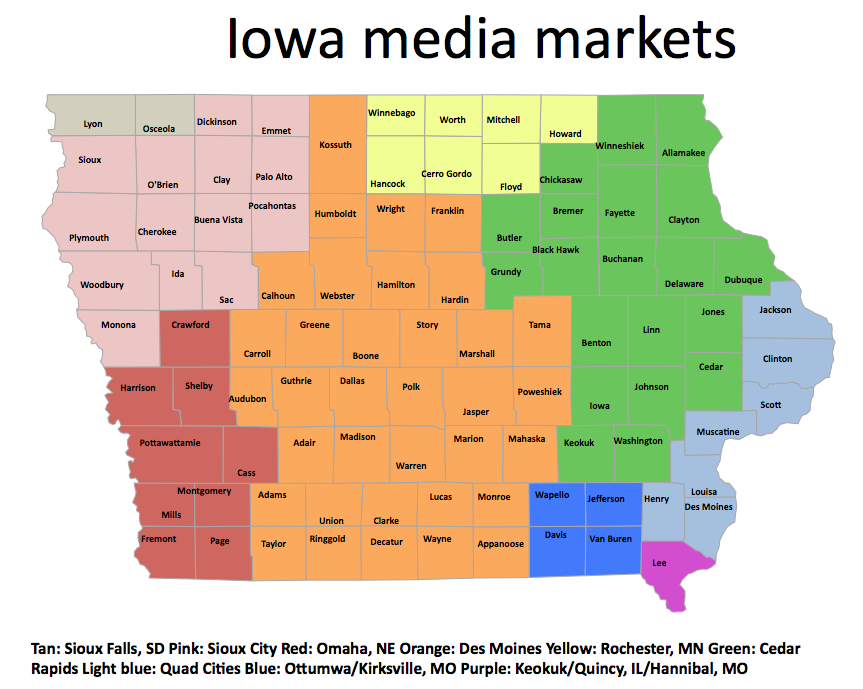