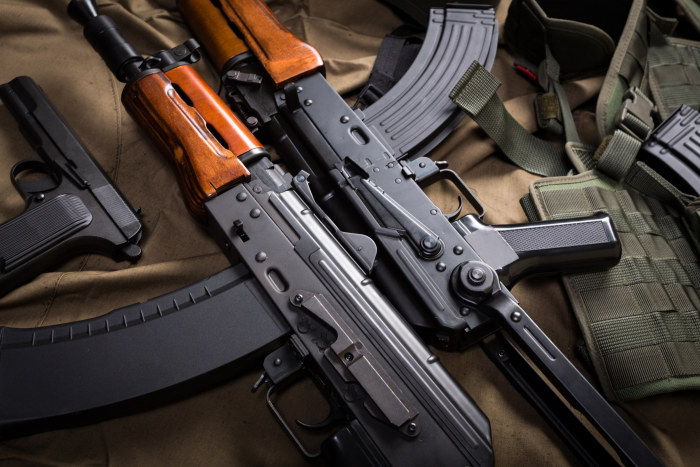 We've abused it. Repeal it.

Ira Lacher: “If there were ever a real right to own a gun, it has been abused by the number of persons who die by gun in America — 100 times each day, 365 days each year. And like anything we have abused, it is time for it to be taken away.” -promoted by Laura Belin

Ignore the comma and the speaker becomes a cannibal.

“… the right of the people to keep and bear arms, shall not be infringed.”

Ignore the comma, as millions of Americans do, including our illustrious Supreme Court, and you have what we experience uniquely among all developed nations: repeated mass carnage at the point of a gun.

Well into the twentieth century, most legal scholars agreed that the Second Amendment simply affirmed the right of states to raise militias without interference from the federal government.

But beginning with its annual meeting in 1977, the National Rifle Association mutated from a community of hobbyists into a political action group bent on persuading America to worship guns as a national god. They began crusading against legislation to restrict firearms such as the bipartisan Gun Control Act of 1968. That was signed into law following the assassinations by gun that year of Dr. Martin Luther King Jr. and Senator Bobby Kennedy.

Ever since, freedom from gun violence has been obstructed by jealously cloaking gun ownership in the Second Amendment, thanks to the contortionist rhetorical flourishes of pro-gun jurists, particularly Supreme Court Justice Antonin Scalia. In his landmark decision in District of Columbia v. Heller, Scalia — the constitutional originalist who believed the founders’ words were what they said and nothing but — divided the words of the amendment into what he called a “prefatory clause” (“militia”) and an “operative clause” (“right to keep and bear”). Thus, he and his fellow pro-gun justices defined Rhode Island as larger than Texas.

But I am not here to argue what the Second Amendment says or intends. What I am here to argue is that however we interpret this apparent right, we have abused it.

And because we can’t, for the life of the hundreds of thousands who have been murdered by legal gun owners, agree on what it says and what it means, there is only one logical, responsible course for a nation professing to be civilized:

No less a champion of the law than Supreme Court Justice John Paul Stevens, who died last month, called for it. Commenting in The New York Times just after a march in Washington against gun violence last summer, he wrote:

[Repealing the Second Amendment] would … eliminate the only legal rule that protects sellers of firearms in the United States — unlike every other market in the world. It would make our schoolchildren safer than they have been since 2008 and honor the memories of the many, indeed far too many, victims of recent gun violence.

Stevens called for repeal because the NRA and their toadies in Congress have relentlessly repressed commonsense legislation that would ban the sale and private ownership of military-style weapons, end “straw man” purchases of firearms, and let law enforcement know who is too unstable to be privileged to own a deadly weapon. Despite most Americans overwhelmingly supporting such policies, those remedies are not politically possible.

Justice Stevens, who dissented in Heller, knew this. Which is why he wrote in his commentary,

Overturning [Heller] via a constitutional amendment to get rid of the Second Amendment would be simple and would do more to weaken the N.R.A.’s ability to stymie legislative debate and block constructive gun control legislation than any other available option.

Stevens’ opinion is not unique. Law professor David Cohen has written that repealing the Second would acknowledge a fact: The founders weren’t perfect and they got many things wrong — such as legalizing slavery. Also, Cohen argues, the founders never saw El Paso, Dayton, Las Vegas, etc., etc., coming:

It is also irrelevant to common decency and safety. Our slavish gun worship has made us crazy stupid in the eyes of the world. Tens of thousands of people die by gun violence each year in America — slaughtered not by criminals but by so-called law-abiding next-door neighbors who bought their death dealers legally and whose ownership was never questioned.

If there were ever a real right to own a gun, it has been abused by the number of persons who die by gun in America — 100 times each day, 365 days each year. And like anything we have abused, it is time for it to be taken away.

Justice Stevens was right: We need to repeal the Second Amendment. To deny it is to experience this bloody and tragic Groundhog Day over and over and over again.