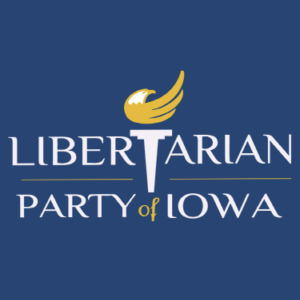 The Libertarian Party of Iowa and its prospective candidate for U.S. Senate in 2020 have filed a federal lawsuit charging that a new law violates their "violates fundamental voting and associational rights," as well as equal protection guarantees, by requiring candidates from minor political parties to file nominating papers in mid-March, when Democratic or Republican candidates could qualify for the general election ballot as late as August.

Previous court rulings indicate they have a strong case.

WHAT CHANGED IN STATE LAW

Under Iowa law, a "political party" is organization that "had a candidate for president or governor who received at least 2 percent of the total votes cast at the last general election." The Libertarian Party of Iowa attained political party status after the 2016 presidential election but lost it when Jake Porter fell short of 2 percent in the last year's race for governor. Libertarians are now one of many "non-party political organizations."

Previous Iowa law in place since 1953 allowed candidates with no party affiliation, or those running on the ticket of a non-party political organization (like the Libertarian or Green Party), to file nominating papers during a window in August. A little-noticed provision in section 37 of House File 692, a wide-ranging election bill approved this year, moved the filing date up for independent or minor-party candidates, requiring them to submit nominating papers in February or March (between 92 and 74 days before the primary election in early June).

Democratic and Republican candidates must also file by that March deadline in order to participate in the primary election. But if no one competes in the primary for any given office, Democrats and Republicans can hold conventions over the summer to nominate a candidate for that office, submitting papers to the Secretary of State's office by late August.

HOLDING PARTIES TO THE SAME STANDARD, OR "DIFFERENTIAL AND ADVERSE TREATMENT"?

The lawsuit filed by the Libertarian Party and Porter, enclosed in full below, argues that setting a mid-March deadline "for the nomination of nonparty political organizations’ candidates for the November general election violates fundamental voting and associational rights of Iowa Libertarian Party members and of the supporters of plaintiff Porter, rights that are protected by the First and Fourteenth Amendments to the United States Constitution and by 42 U.S.C. § 1983."

Furthermore, the plaintiffs argue, forcing the Libertarian Party to nominate candidates in mid-March while "political parties" may file papers "as late as sixty-nine days before the November general elections violates the plaintiffs’ right to equal protection of the law as guaranteed by the Fourteenth Amendments to the United States Constitution and by 42 U.S.C. § 1983."

“Voters should ultimately have options on the ballot and it goes against our democratic process to deny them options and that’s what this does,” [...]

“I think it was done as part of what I call ‘The Incumbent Protection Act,'” Porter said. “A lot of times they don’t like challenges and I think that was probably why it was put in there.”

Republican State Senator Roby Smith, who floor managed this bill in the Iowa Senate, did not respond to Bleeding Heartland's inquiry about the lawsuit. But in a written statement, he argued that “moving the filing deadline forward for independent candidates simply treats them in the same manner as Republican and Democratic candidates.”

That is incorrect, because the major parties retain the ability to nominate candidates over the summer, if no one on their ticket files for the primary election.

The State of Iowa Election Bill Great Compromise protects all parties, literally "political parties," with equal due process, as is mandated by the Fourteenth Amendment to the U.S. Constitution. All parties are held to the same standards—which are neither arbitrary nor capricious.

Political parties as defined by Iowa law are treated equally, but non-party political organizations are now at a disadvantage, even though most would consider Libertarians or Greens similarly situated.

Jacobsen described the bill as a "great compromise" because lawmakers in the House removed most of the disenfranchising provisions in House File 692, which the Senate had approved along party lines. The final version of the bill cleared both chambers unanimously.

– It handicaps minor parties from reacting to later breaking changes in the political landscape, including later emerging major party candidacies;
– It hampers the recruitment of convention and caucus participants because of the early uncertainties that arise in any campaign season;
– That early in a campaign, volunteers are more difficult to recruit and retain, media coverage and campaign contributions are more difficult to secure, and voters are less interested in the elections;
– The Party will be locked into the candidates they nominate in March regardless of subsequent developments and disclosures concerning the major party candidates and their races, the Party’s own candidates, other minor party and independent candidates, or any other state and national developments that could affect campaigns.

On many occasions, major parties have failed to recruit candidates in Iowa legislative districts for the primary but nominated contenders over the summer who won in November. Recent examples include Republicans Brian Moore and Bob Hager, who won House seats in 2010, and Anne Osmundson, who won a House seat in 2018. Under the new law, Democrats or Republicans could recruit a candidate for a district where no one filed in March. But Libertarians--who have been competing for a growing number of Iowa offices lately--could not.

Similarly, changing circumstances inspired Republicans Zach Nunn and Rick Bertrand to decide last August to run for the Iowa Senate in districts where neither had competed in the June primary. Democrats and Republicans could swap out a weak nominee for a stronger contender in the summer of 2020, but Libertarians will be unable to make any substitutions.

The early deadline can be seen as a back-door way to implement a "sore loser" statute in Iowa. Previous law did not stop an unsuccessful primary contender from filing for the general election as an independent, as former Democratic State Representative Dan Kelley did in 2016. If the lawmakers' intention was to stop sore losers, they could have addressed that problem directly, rather than limiting the ability of citizens with no major-party affiliation to size up the political landscape and file where an opportunity arises.

MANY COURTS HAVE STRUCK DOWN EARLY PETITION DEADLINES

I turned to Richard Winger, editor of the 35-year-old print publication Ballot Access News. He replied by e-mail on August 6,

The one area of ballot access law in which the U.S. Supreme Court has always been favorable to minor party and independent candidates is the qualification deadline issue. The U.S. Supreme Court has never upheld any early petition deadline, and in Anderson v Celebrezze, 460 US 780 (1983) showed that early deadlines are unconstitutional all by themselves, even when the number of signatures is low.

In Anderson v Celebrezze, John B. Anderson challenged the March 20 petition deadline for independent presidential candidates. He won, even though the number of signatures he needed in Ohio was quite low...5,000 signatures, which was only one-tenth of 1 percent of the Ohio electorate at the time.

Winger added, "Lower courts have struck down early petition deadlines in more than 50 cases, mostly since 1983, although some of those decision were earlier." The March 2019 print edition of Ballot Access News lists all of those court rulings (in section number 21).

States generally have wide latitude to regulate elections. Why have courts looked less favorably on early deadlines to qualify for the November ballot? Winger explained,

The basis for Anderson v Celebrezze is U.S. history. Time after time, the voters have formed new parties, or decided to support independent candidates, after it was clear whom the major parties were nominating. Voters must be given a chance to support someone new if they believe the two major parties are going to disappoint them.

The Republican Party itself was formed on July 6, 1854, in response to the Kansas-Nebraska Act, which was passed by congress in May 1854. It switched Kansas and Nebraska territories from free, to whatever the voters there wanted, which set off a big rush by both sides to populate Kansas. There was a literal civil war in Kansas before the general civil war of 1861. The Republican Party went on to win a plurality in the autumn election of 1854, for the U.S. House. They were the biggest party in the U.S. House after that election, and they hadn't even existed early in that year.

In 2000, the U.S. State Department criticized Azerbaijan for its new election law, which said that a party could not get on the ballot unless it was at least six months old. Yet the new Iowa law is even harsher than that law.

Winger commented in the March issue of his publication, "Many state legislators have no knowledge of this area of election law." For his part, Jacobsen (who is an attorney) told Bleeding Heartland, "Anderson vs. Celebrezze is a different fact pattern and is not analogously comparable at law, in my opinion."

U.S. District Court Judge Stephanie Rose will hear the case, Ballot Access News reported. Federal litigation often takes years, though sometimes a court will put a law on hold while the case is pending. So this portion of the law may be stayed for the 2020 election cycle.

Final note: if the court uses a "rational basis" standard, the lowest bar for considering a challenge to a law, the state would need to show only some legitimate interest in moving up the filing deadline for independent or minor-party candidates. The Libertarian plaintiffs argue there is "no legitimate state interest" underpinning the law, while Jacobsen maintains the new standard is not "arbitrary and capricious" (which could be enough to win on a rational basis standard).

My understanding is that courts have often subjected ballot access restrictions to intermediate scrutiny. Under that standard, the state would have to show some important interest in moving up the filing deadline for candidates not affiliated with either the Democratic or Republican parties. I can't think of one. Protecting incumbents may be very important to political parties, but the government should not put its thumb on the scale to achieve that end.

Appendix 1: Petition filed by the Libertarian Party of Iowa and Jake Porter in the U.S. District Court for the Southern District of Iowa

Appendix 2: August 5 news release from the Libertarian Party of Iowa

It is our opinion that these laws sought to reduce competition and to benefit the party establishment of both major parties by limiting voter turnout and reducing the number of independent candidates. These bills would do nothing protect the rights of Iowans, they restricted choice. The LPIA holds that these proposals were illegitimate and unconstitutional.

While the most egregious of these measures were removed before being passed into law, Governor Kim Reynolds signed into law HR692. which sets third party and independent candidate to major party primary election filing deadlines. Elections Libertarian and independents cannot participate in, reducing our filing period by five months. The LPIA strongly believes this violates our 1st and 14th Amendment rights by holding us to a deadline for a primary elections we cannot participate in and adding unnecessary hurdles to our right to petition our government by filing candidates.

The LPIA therefore seeks a legal remedy to cure these violations of our rights and calls on the courts to defend the liberty of independent voters and candidates. Attached below is the full complaint with details of our case: