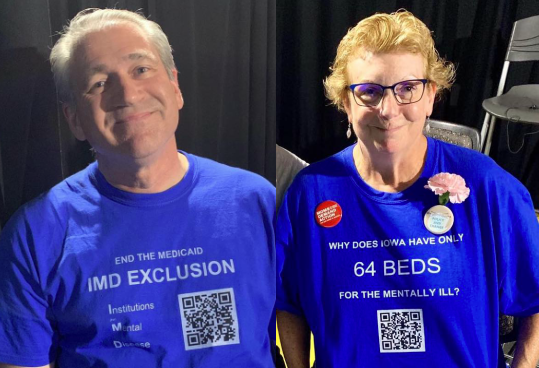 It is about the beds

Leslie Carpenter of Iowa City is an advocate for people with serious brain disorders and works to improve the broken treatment system in Iowa and across the country. -promoted by Laura Belin

Here in Iowa, we have heard for several years that we should realize the mental health crisis “isn’t about the beds.”

The argument was couched in a way to say it wasn’t about the beds, but the type of beds. The goal was to divert our attention from the fact that our state has the worst proportion of state bed numbers per capita: just two beds per 100,000 people. The Treatment Advocacy Center ranked Iowa dead last, 51st in the country on this metric. We have only 64 adult beds and 32 child beds at our state-run Mental Health Institutes in Independence and Cherokee.

I spent some time with the numbers and calculated that to get to the recommended number of adult beds (50/100,000 people), we really should have 1,200 adult beds.

When Governor Terry Branstad was gearing up to shut down two of our state's four in-patient Mental Health Institutes, he spewed a lot of propaganda to prepare Iowans for what he was planning. He depicted the facilities as old and substandard. He claimed that people with serious mental illnesses were better off getting treatment “in the community.” He tried to create a scenario in which it would seem like he was doing a good thing.

Would you like to understand the real reason he wanted to close the institutes? It was about the money.

You see, in 1965, President Lyndon Johnson signed the Medicaid Act, which included the IMD (Institutes of Mental Disease) Exclusion. This policy prevented federal Medicaid matching dollars from being used for any facility or hospital with more than sixteen beds for a person with some form of a mental disease - which included both mental illnesses and intellectual deficits.

The idea was, by keeping the facilities smaller, abuses would be less likely to happen. For many years, states got around this restriction by applying for IMD Waivers. States could still get federal Medicaid dollars, if they could show they were providing “innovative” treatments in their in-patient facilities.

But the waivers ended in 2005, so states no longer had access to that federal money. The funding shortage was the main driver of Branstad's decision to close mental health institutes.

Some might ask, “What happened in Iowa after the two facilities were closed? Did conditions improve?” In a word, no! At least three patients forced out of the mental health institutes died soon after their closure.

Things also got worse at every single level of care for people with mental illnesses in our state. Many former residents at the mental health institutes really did need long-term care with providers who understood how to take care of them. Many deteriorated and ended up needing acute care hospitalization. Then, when they were stabilized, the hospitals had nowhere to discharge them to, so they remained in the hospital beds, sometimes for months.

In turn, those limited hospital beds in psychiatric units were not available to new patients in acute psychiatric distress presenting to the Emergency Departments in hospitals across the whole state. People were warehoused for days in the Emergency Departments. People were transported across the state in the back of a sheriff’s car...people who are sick, not criminals. And people died. So many suicides. And homicides...families killed by a loved one with a serious brain disorder who couldn’t get access to a hospital bed and treatment when needed - like the Nicholson family in Bondurant.

The conversation in Iowa turned to “it’s not the beds, it’s the type of beds.” We were told we needed more sub-acute beds (that part is true), and other types of care along the continuum of care. We need more providers (also true). We need more facilities for people with complex needs, with “no eject/no reject” rules in place (also true). We need Access Centers (true). And so, the Complex Needs Mental Health Bill was enacted in 2018. And that was good.

But that bill wasn’t funded, so much of what policy-makers envisioned still hasn’t happened.

There has been progress. Access Centers are being built. Some sub-acute care beds have been opened up, like at the Hillcrest Residential Care Facility in Dubuque. We improved our state’s commitment law, and here in Johnson County, we are developing Iowa's first Civil Mental Health Court, so that better commitment law will effectively help us with more Assisted Outpatient Treatment.

However, we still need more state beds for the patients who truly need long-term, institutional level care. And here’s the thing: long-term, in-patient facilities don’t have to be bad places. They could be wonderful places with kind, caring, and competent mental health professionals. They could be places patients want to go, where families love to visit, where professionals love to work, where volunteers want to help.

For that reason, I will continue to wear my t-shirt highlighting the ridiculously low number of beds in our state. We will continue to point out this problem to the presidential candidates campaigning in Iowa.

We can do better. We must do better. And having more state beds is one of the solutions we need to advocate for.