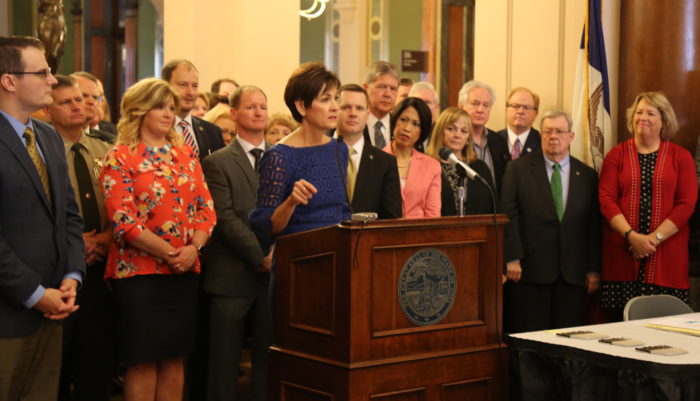 Peggy Huppert is the executive director of the National Alliance on Mental Illness in Iowa. -promoted by desmoinesdem

Governor Kim Reynolds signed two mental health bills on March 29 in an emotional ceremony in the capitol rotunda. I was one of the hundreds of legislators, lobbyists and advocates who witnessed the event.

The two bills are quite different. What they have in common, in addition to dealing with mental health and being signed into law on the same day, is that they passed both chambers of the Iowa legislature unanimously. That in itself is extraordinary.

Although the school suicide awareness/prevention bill (Senate File 2113) had been worked on for several years, it still really is a baby step. It requires just one hour of continuing education training for K-12 educators annually on suicide awareness and prevention or trauma-informed care. We (NAMI) would like to see a requirement that every K-12 employee take the 6-hour Mental Health First Aid course and have ongoing requirements. But this is a start. It was long overdue and very welcomed by parent and education advocates.

The complex needs bill (House File 2456) is truly significant. It incorporates all the recommendations of the Complex Needs Workgroup, requiring new services across the state that, when fully implemented, will serve thousands of Iowans a year. It does the following:
• Adds the following core (mandatory) adult mental health services:
o Crisis services, formerly in “core plus” (optional)
o 22 ACT (Assertive Community Treatment) teams -- an increase from 10 currently. ACT teams provide comprehensive case management to help people with serious mental illness live independently.
o At least six Access Centers with up to 16 subacute level beds each that will provide 24/7, secure, No Eject, No Reject care for people experiencing a mental health crisis. The goal is for no Iowan to be farther than 90-minute drive from a Center.
o Intensive Residential homes to serve up to 120 persons in small groups across the state.
• Iowa Department of Human Services (DHS) will accept multi-region arrangements to share intensive services
• DHS will create a single, statewide mental health hotline serving adults and children
• Involuntary committal process is changed (including allowing video conferencing for hearings) and will be studied, with a report due to the legislature by the end of 2018
• Secure transportation services as an alternative to law enforcement is allowed as an option for persons under a committal order
• DHS must adopt rules relating to civil commitment prescreening assessments
• Oral medication is added to Assisted Outpatient Treatment protocol
• A legislative interim committee will meet following this session to analyze long-term funding options and viability

I know people can’t wrap their heads around a significant bill passing unanimously, but that's what happened. I don’t think it’s because everyone loved it or even understood it. But they got the message that it would be very bad (and politically stupid) to vote against it. They saw the makeup of the Complex Needs Workgroup as 22 people who truly understand the system and spent a significant chunk of time over five months debating what the gaps are and how best to close them. And then, they listened and acted.

Do not underestimate the importance of the Des Moines Register's Iowa poll results released in December showing that mental health was the number one issue Iowans wanted legislators to deal with. We quoted that extensively, and legislators got the message. They felt the heat to do something.

Even those who acknowledge its significance as a policy bill criticize its lack of a state appropriation. But in truth the funding is there, at least to launch the services. The Mental Health and Disability Services Regions collectively have about $145 million in reserve and $30 million in untapped levying capacity. That is more than enough to start up these services over the next couple of years. The county supervisors in charge of the regions need to be forced to do more, which is what this law will do.

(Polk County is an exception in several ways. First, they are already doing much, although not all, of what is required. Second, although they are currently running a multi-million dollar deficit with mental health spending versus levy proceeds, Polk also has Broadlawns, which has its own levy and is flush with cash thanks to Medicaid expansion.)

Now within three years, when many of these services are online and most of the reserves have been spent, there will definitely be a problem. The legislature will either have to raise or eliminate the dollar cap on the mental health levy, put in state money, or both. That’s why we’re pushing them to appoint an interim committee to look specifically at long-term funding for both adult and children’s mental health services later this year.

In addition to the property tax-funded Regions, many of these new services, including crisis and subacute, should be reimbursed by Medicaid. It’s up to DHS to make sure the private insurers now managing care pay, and it’s up to all of us to make a lot of noise if they don’t. Or, end managed care and hold the state accountable.

Many Democratic legislators have pointed out that the same Republican legislators who voted for the complex needs bill also voted for a massive income tax cut and huge cuts to DHS, which oversees mental health services. Fair point. Ultimately the state has to have enough money to pay the Medicaid bills. If this legislature passes huge income tax cuts with no offsetting revenue sources, that’s going to be a problem.

But the bottom line for advocates is this: We got a significant, progressive mental health policy bill through a Republican-controlled legislature and signed by a Republican governor. I know many Democrats find it hard to believe that Republicans would support, let alone initiate, anything good. But in this case, it is the truth. It is also the truth that about a dozen legislators worked together, across party lines and across chambers, to push this bill over the finish line.

This unusual confluence of events was not lost on me last Thursday morning in the rotunda. I don’t normally get emotional at these kinds of events, but as I looked around at those assembled, even ringing the railing above us, I felt a wave of emotion. I was struck by the gravity of the occasion. People were silent. They were taking photos. They were crying.

I’ve been to dozens of bill signings over the years and let me assure you, this is not common. I talked to many statehouse veterans – journalists, lobbyists and legislators -- and they all agreed it was rare.

Of course there are always naysayers who doubt the significance or say it’s not enough.

Does this bill fix everything? Of course not.

Will there be challenges with funding and implementation? Most assuredly.

But don’t let anyone tell you its not significant. One hundred and fifty elected officials unanimously said mental health is important, and things must change. And then the governor enthusiastically agreed. All this occurred in a little over three months from the day the recommendations were released in December and two months from the day a bill was filed. That just doesn’t happen in the Iowa legislature. But this time it did. And that, my friends, is something special.

Peggy Huppert, a resident of West Des Moines, is the executive director of NAMI (National Alliance on Mental Illness) Iowa. She considers herself an organizer, advocate and activist. She has worked on dozens of campaigns over the past 37 years ranging from school board to President. She served as the Polk County Democratic Co-Chair from 1998-2000.

Top image: Peggy Huppert (far right) is among the advocates and state lawmakers watching Governor Reynolds at the mental health bill signings on March 29. Photo by the Iowa Hospital Association, used with permission, along with these pictures: 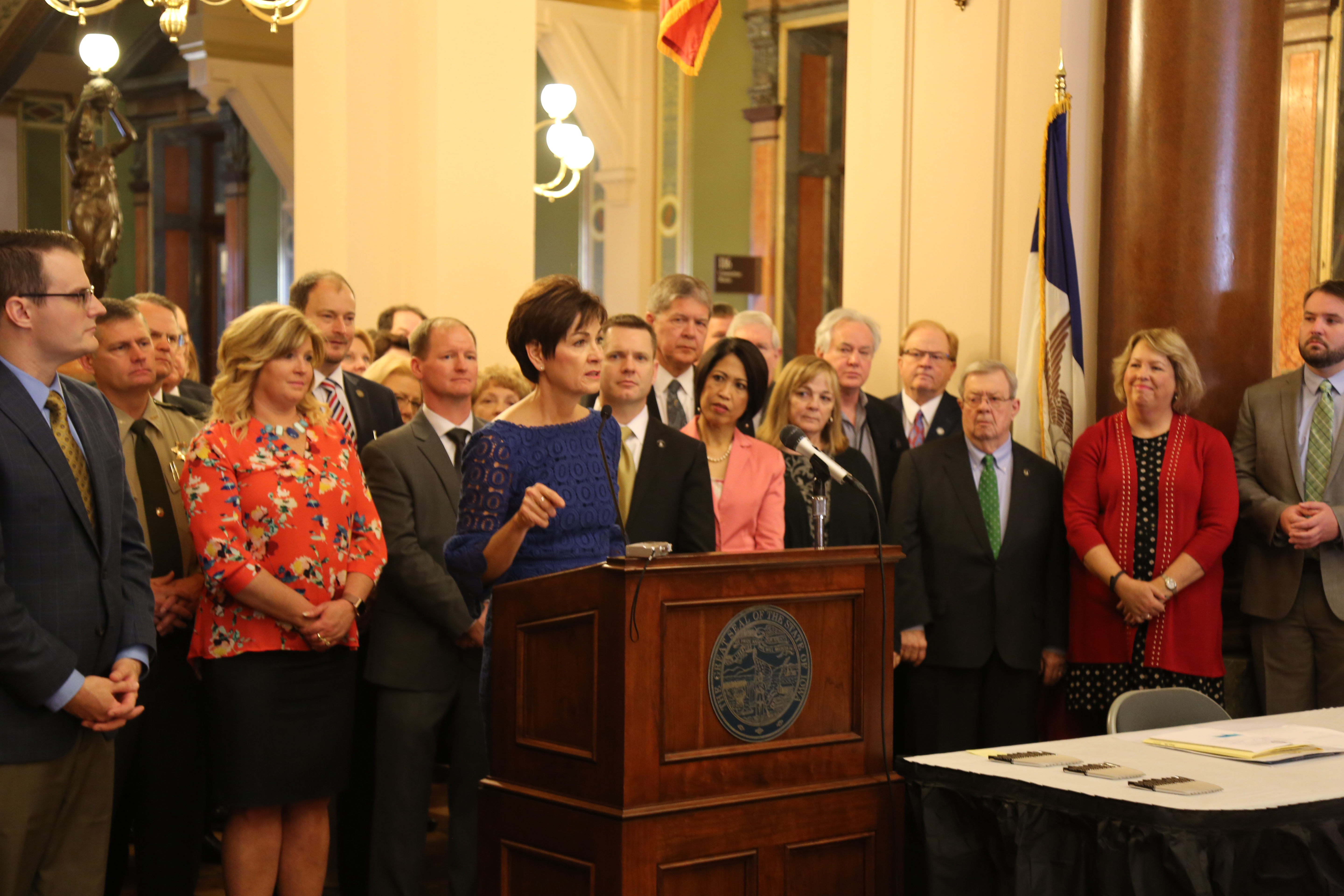 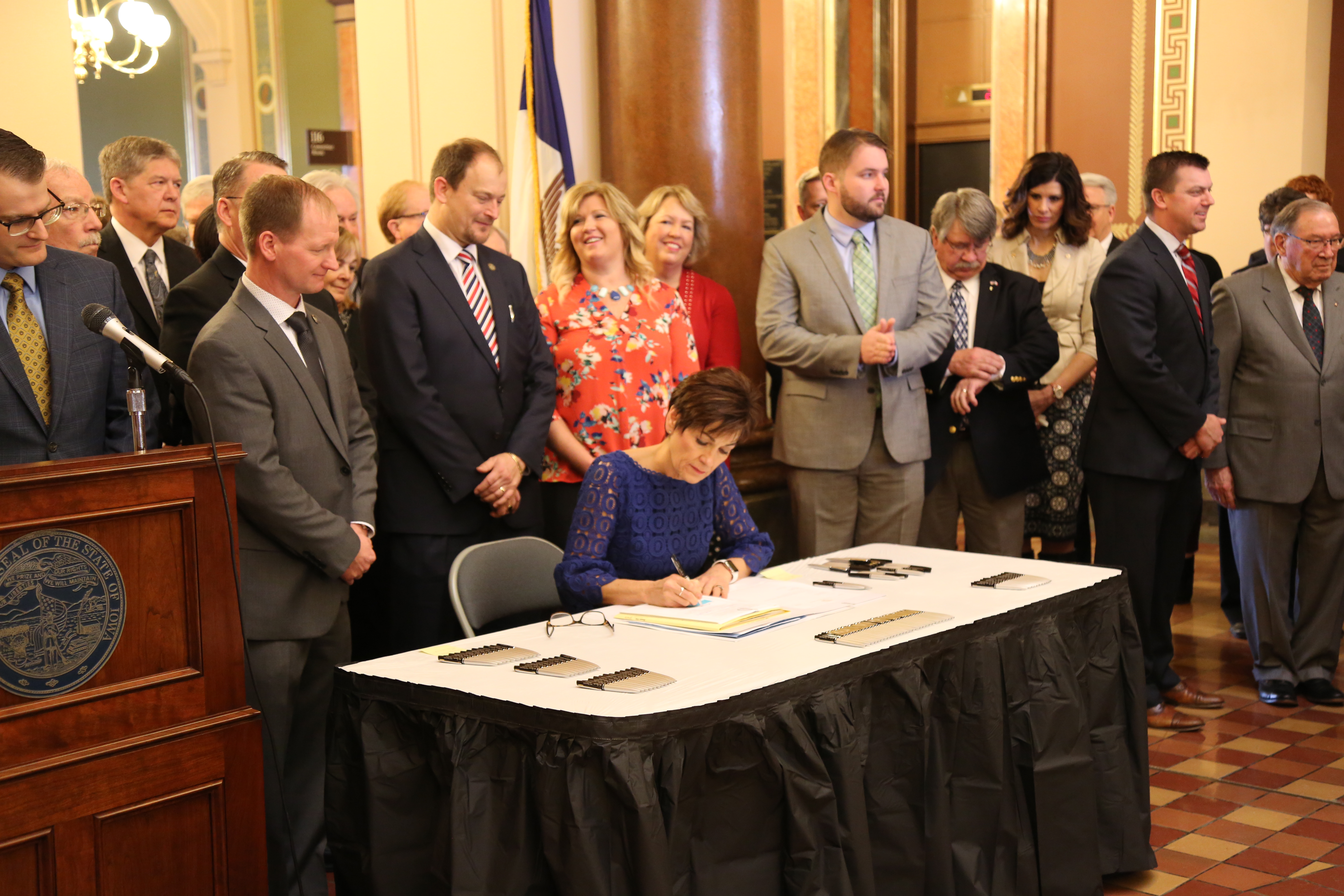