Is Iowa's secretary of state fully complying with court ruling on voter law?

The State of Iowa has revised the official absentee ballot request form in light of a court ruling that invalidated some sections of Iowa election law. However, the new form still lists a voter ID number as a required field, despite a court order permanently enjoining Secretary of State Paul Pate from “indicating that such information is ‘required.'”

Polk County District Court Judge Joseph Seidlin upheld the part of the law that requires voter ID in a decision published on October 1 (enclosed in full below). He ruled several other sections of House File 516 unconstitutional.

The law allowed county auditors to dispute an absentee ballot request form or reject an absentee ballot if the signature on either the form or the affidavit envelope accompanying the ballot appeared not to match “the signature on record of the registered voter.” The court found “the risk of depriving Iowans of the right to vote outweighs any state interest in requiring signature-verification of absentee applications and ballots,” with due process problems as well.

On the one hand, Judge Seidlin found that “the requirement of a verification number on an absentee ballot application does not infringe the right to vote absentee.” The state has a legitimate government interest in “ensuring the integrity of, and instilling public confidence in, all elections in this state,” and there is a reasonable fit between that goal and requiring an ID number on absentee ballot applications. Furthermore, a county auditor would not reject a voter’s request form that lacked an ID number. Rather, staff may “obtain the missing information to complete the application” from available databases.

On the other hand, the District Court wrote,

The temporary injunction enjoining the Secretary of State from including on the absentee ballot application language stating, “An absentee ballot cannot be issued until ID number is provided” or similar words indicating that such information is “required” should, however, be made permanent.

The ruling went on to state (page 37, emphasis added),

IT IS FURTHER ORDERED that the portion of the temporary injunction Order entered herein on July 24, 2018 which provided “that the Secretary State is ENJOINED from including on the absentee ballot application language stating ‘[a]n absentee ballot cannot be issued until ID number is provided’ or indicating that such information is ‘required’”, is hereby made permanent and the Iowa Secretary of State is hereby permanently enjoined from taking such action.

The Secretary of State’s legal counsel Molly Widen e-mailed all county auditors on October 1, explaining the court ruling’s impact. Widen attached a revised absentee ballot request form to her e-mail (enclosed in full below), reflecting changes ordered by the court. Here’s a picture of the form. (click to enlarge) 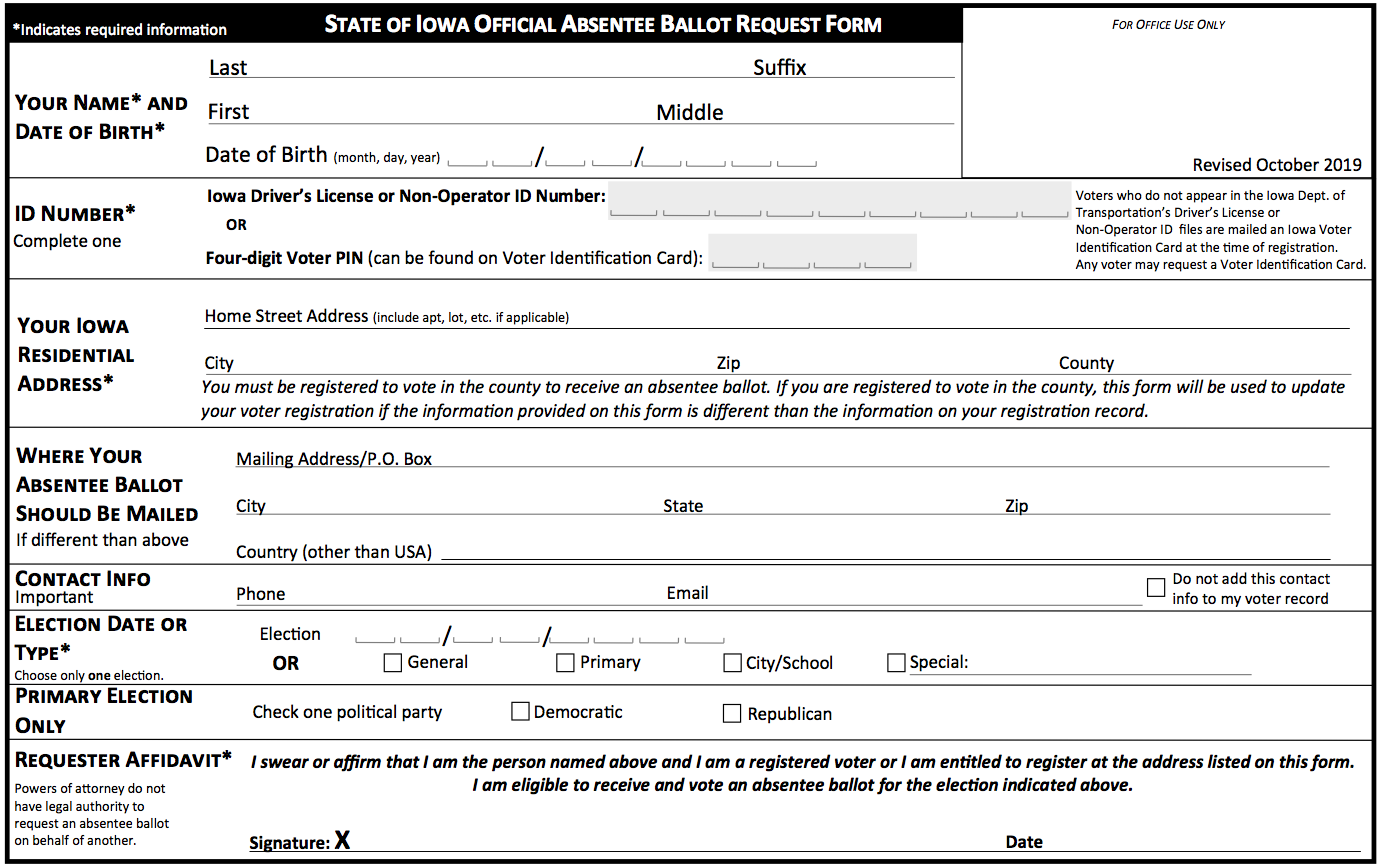 The Secretary of State’s office did remove language stating “An absentee ballot cannot be issued until ID number is provided.” The new form also clarifies, “Any voter may request a Voter Identification Card.”

However, the revised form has an asterisk next to “ID NUMBER” and says at the top that an asterisk next to a line “indicates required information.” That appears to conflict with the District Court ruling. Here’s a closer view of that section, with key parts circled in red.

The judge was clear (p.30) that in the absence of a voter ID number on an absentee ballot request form, “The application is not rejected; the county auditor is to obtain the missing information to complete the application.”

The problem is the asterisk. A voter seeing “ID NUMBER” as a required field, who doesn’t have that number handy, would reasonably assume there’s no point submitting the absentee ballot request. Nowhere does the form clarify that county officials can find that number for you if you don’t know it and can’t find your ID card.

For years, Iowa’s absentee ballot request forms gave voters the option of providing the last four digits of their Social Security number as a way to verify their identity. The new form doesn’t include that option. State Representative Cindy Winckler, a Democrat who served on the House subcommittee that considered the 2017 law, told Bleeding Heartland in an October 2 telephone interview,

It’s unfortunate that the secretary of state’s direction and the documentation behind it does not go back to the last four Social Security digits and the driver’s license number or the non-operator number on the voter registration form. It is going to be confusing for those individuals, it will take more training, and it will disenfranchise more voters, because they won’t have that ID number, the voter ID number in front of them, and think that if they don’t have a driver’s license they can’t vote by mail.

Winckler added that because the court order allows everybody to request a voter ID, the state could “just go back to previous law, because the last four digits of your Social, and/or your driver’s license number or non-operator number is all on record, and that gives everybody equal footing to apply for an absentee ballot.”

Communications staff for the Attorney General’s office had no comment for the record on whether state attorneys okayed the new form showing ID number as a required field. Kevin Hall, communications director for the Iowa Secretary of State’s office, told Bleeding Heartland via e-mail, “we are acting on the advice of counsel.” Asked whether Pate’s staff consulted with the Attorney General’s office regarding the new absentee ballot request form, Hall confirmed, “Yes.”

Neither the plaintiffs nor the defendants have decided whether to appeal the District Court ruling, Anna Spoerre reported for the Des Moines Register on October 1. In a statement posted in full below, LULAC called the decision a “major win” and a victory for Latinos across the country. Pate also celebrated the ruling as a “victory for election integrity.”

UPDATE: Joe Henry, political director for LULAC Iowa, said in response to this post, “We have contacted our lawyers and will make it clear to the Secretary of State that he is not complying with the judge’s ruling.”

LATER UPDATE: The Secretary of State’s office again changed the absentee ballot request form on October 3 and informed county auditors that they are seeking clarification from the court. Click here for more details. 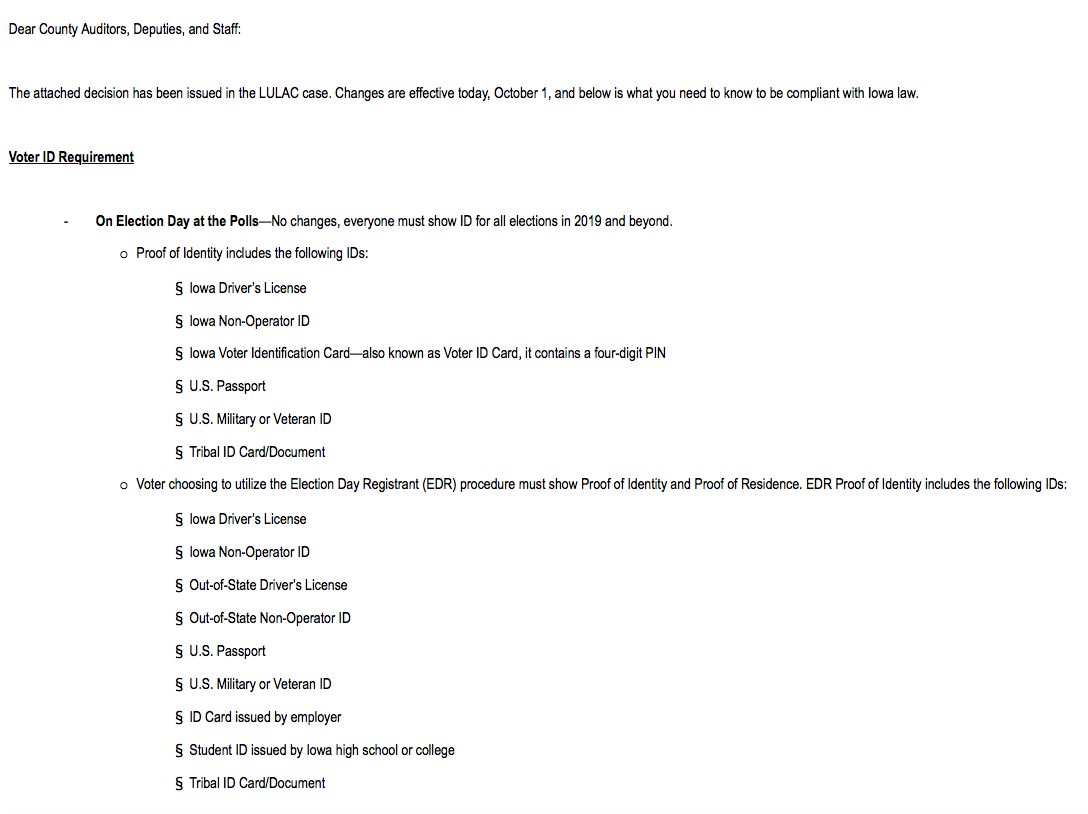 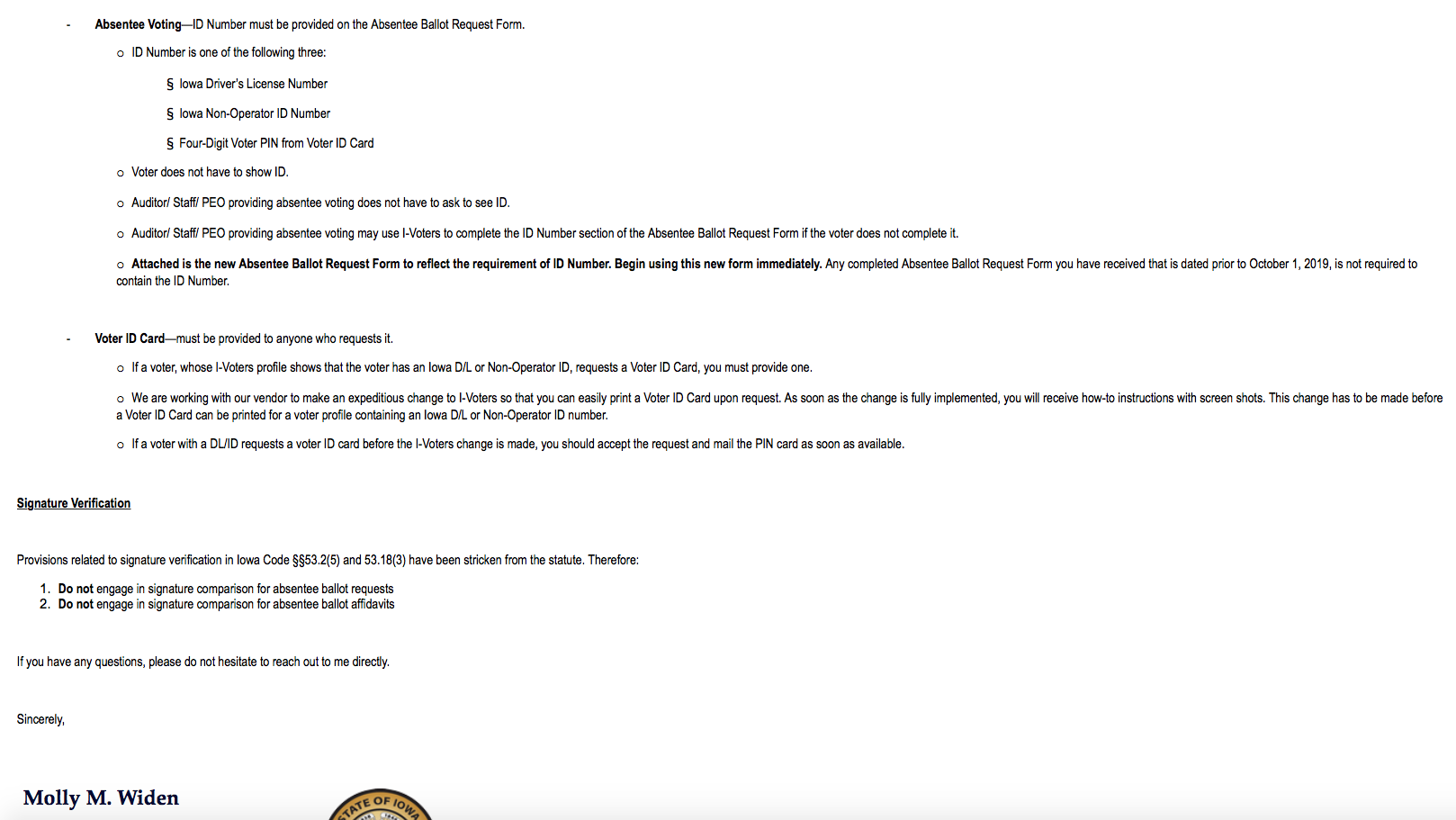 Appendix 3: Statement from LULAC on the District Court decision.

A District Court Judge in Iowa issued an important ruling Tuesday in a major win for LULAC by overturning several major elements of a voter suppression law that was passed by the state legislature in 2017. The judge’s ruling sends a clear message to those who would attempt to violate our right to vote.

“This is a victory for our community throughout the United States,” says Domingo Garcia, National LULAC President. “Most especially, this ruling recognizes the sacrifice Latinos and Hispanics have made in the struggle to ensure our civil rights and especially the right to vote,” he added.

The decision by Judge Joseph Seidlen rejected requirements that Iowa voters must provide a voter ID number to get an absentee ballot or that people who could not produce a driver’s license or ID issued by the state could be denied a voter ID card. Also thrown out was a rule that rejected votes from people based on a person’s signature.

“LULAC worked hard in Iowa to make our community aware of the legal requirements for voting and this decision vindicates all our effort,” said Joe Henry, President of Council 307 and Special Advisor to the President. “On all counts, the court’s ruling clears the way now for our Latino votes to play a major role in 2020 and we’re going to continue urging Latinos to make their voice heard,” he added.

Iowa has a growing Latino community in the state and already 70% of adult Latinos and Hispanics are registered to vote. Now, LULAC is working to boost Latino voter turnout by another 25,000 to show the country that our community will play a decisive role in the 2020 primaries and general elections.

“We must continue to be diligent and determined in fighting voter suppression whether it’s in Iowa or anywhere else in America,” says Nick Salazar, Iowa State Director. “This legal ruling is an important step but we have to stay alert in our local polling places, county election centers and state capitols to ensure our votes are counted,” he concluded.

The following is a summary of the judge’s ruling —

“This ruling is a victory for election integrity. My goal has always been to make it easy to vote, but hard to cheat. Iowans have overwhelmingly voiced their support for Voter ID and this law ensures voters will be asked to provide identification before casting their ballot. Additionally, the court found that the requirement of a voter verification number on an absentee ballot request places no additional burden on voters. I appreciate the District Court’s decision that upholds the principles of Voter ID and election integrity. I will continue to fight to ensure Iowa has clean, fair elections statewide.”