The Iowa Secretary of State’s office has revised the absentee ballot request form for the second time in one week, pending clarification from a court on whether the form can list a voter ID number as a required field.

As Bleeding Heartland previously reported, a Polk County District Court upheld provisions of Iowa’s 2017 election law that require voter ID for everyone casting ballots in person or by absentee. However, the judge issued a permanent injunction barring the Secretary of State from “including on the absentee ballot application language stating ‘[a]n absentee ballot cannot be issued until ID number is provided’ or indicating that such information is ‘required’” […].”

The Secretary of State’s office quickly sent county auditors and staff a new absentee ballot request form, which listed “ID NUMBER” as a required field. A close view of that portion of the document (I added red ovals to highlight the key parts):

The Secretary of State’s office did not respond to Bleeding Heartland’s inquiry about how the asterisk next to “ID NUMBER” was consistent with Judge Joseph Seidlin’s order. Some county election officials raised the same question.

The District Court held that requiring an ID number on a ballot request did not violate citizens’ right to vote, in part because elections staff can look up that information if the voter does not provide it. But the October 1 version of the form did not clarify that officials could fill in the ID number if needed.

Late in the day on October 3, the secretary of state’s legal counsel Molly Widen sent the following e-mail.

In the Order for Judgment issued in the LULAC case this week, the court made it clear that Voter ID is the law for both election day and absentee voting. In its decision, the court found that the requirement of a voter verification number (ID Number) on an absentee ballot application does not infringe on the rights of voters. Accordingly, the court dissolved the temporary injunction that prohibited the requirement that absentee ballot applications contain a voter verification number. However, the court also made permanent its injunction that the application may not include language stating “’[a]n absentee ballot cannot be issued until ID number is provided’ or indicating that such information is ‘required.’”

While we do not dispute the first sentence enjoined, the injunction “indicating that such information is ‘required’” creates an ambiguity in if/how we can communicate on the absentee ballot request form what fields are required under Iowa law. We believe that it is in the best interest of voters and election administrators that we address this inconsistency. Therefore, we have filed a motion with the court asking that it correct or clarify its order concerning the language to be used on the Absentee Ballot Request Form.

Until such time that the court rules on this motion, the attached form will be the State of Iowa Official Absentee Ballot Request Form. This form is different from the one that was provided to you on Tuesday, October 1. Pursuant to Iowa Code §53.2(4)(a), an absentee ballot request shall contain six distinct pieces of information:

If any of the necessary information is missing, it is the auditor’s obligation to obtain that information by the best means available.

As always, we will continue to work with and follow the advice of the Iowa Attorney General’s Office in providing information, guidance and training to County Auditors and staff. Thank you for your patience through this legal process, and for your diligence in serving Iowa voters.

Here’s the form attached to that message (click to enlarge). Notably, there are no asterisks denoting required fields. 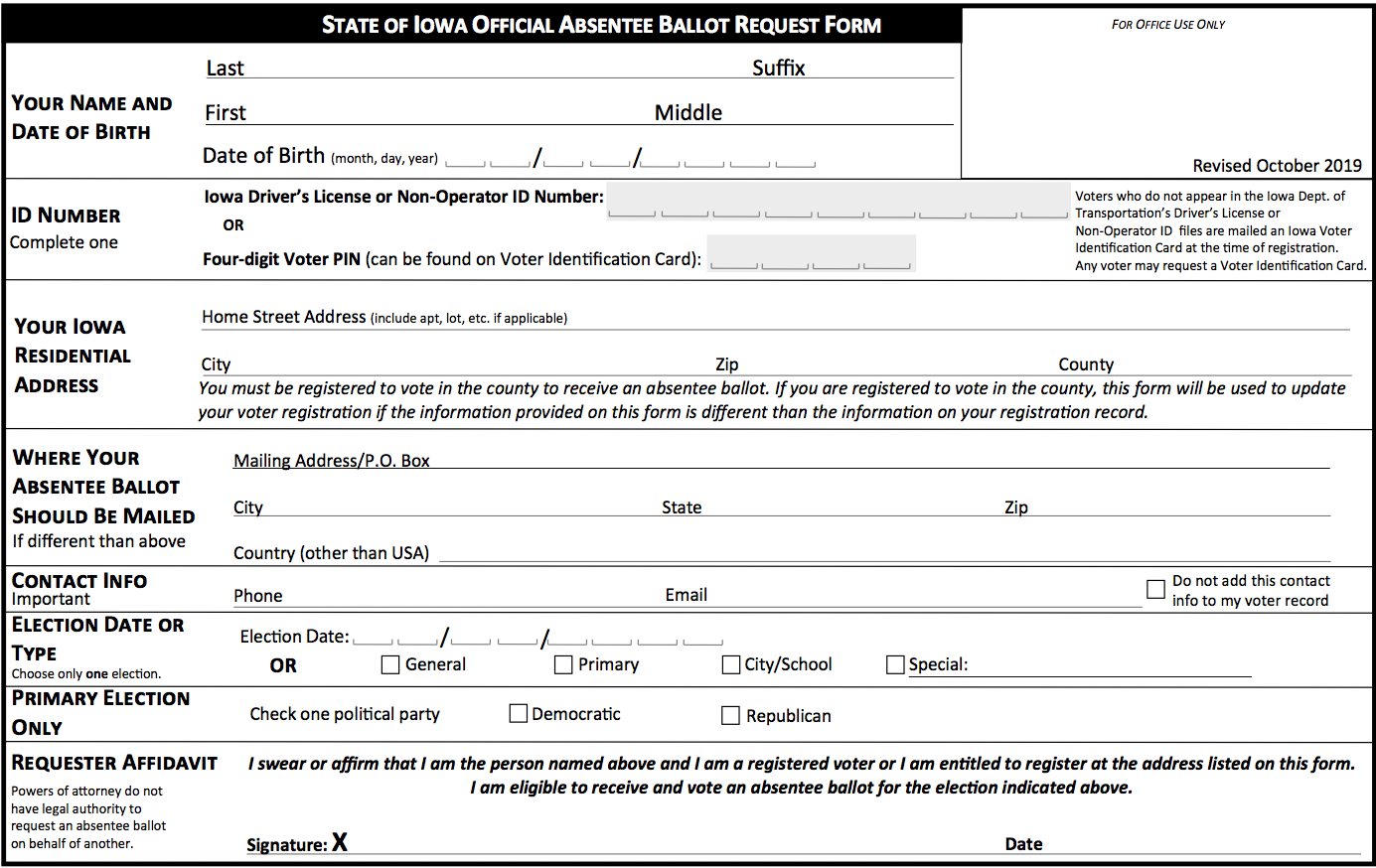 How might the court “correct or clarify its order”? One possibility: an order confirming that the state may not in any way lead voters to believe they must provide an ID number in order to receive an absentee ballot. The state can require that information in order to process an application but need not obtain it from the voter seeking a ballot. (Rather, staff can use databases to find the number.)

Alternatively, Judge Seidlin could revise the permanent injunction, allowing the state to indicate on absentee ballot request forms that a voter ID number is required. If that happens, the Secretary of State’s office should add language to the document along the lines of, “Staff can find this number for you if you leave this section blank.” Otherwise many voters are likely to be confused and discouraged from attempting to vote by mail.

UPDATE: Joe Henry, political director for the League of United Latin American Citizens of Iowa (one of the plaintiffs in this case), told Bleeding Heartland the plaintiffs will also request clarification from the District Court regarding the asterisk mark indicating a required field on the absentee ballot request form.