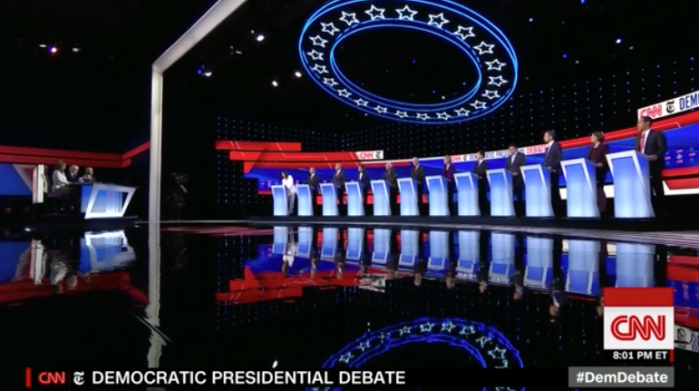 My take on the "debate"

Ed Fallon is a former Democratic state lawmaker and “agitator in chief” at Bold Iowa. -promoted by Laura Belin

Like many of us who understand the utter urgency of the climate crisis, I was beyond furious at CNN, The New York Times, and the Democratic National Committee (DNC) for completely ignoring the climate crisis in Tuesday's "debate."

(Big kudos are due to Bernie Sanders and Tom Steyer for talking briefly about climate, despite the lack of a single climate question from the moderators. Tiny kudos to Pete Buttigieg, Andrew Yang, and Amy Klobuchar for at least mentioning climate in their responses to other questions.)

I put "debate" in quotes because when you cram twelve candidates onto a stage, each fighting for the mic and that memorable twist of phrase or gotcha moment, it's impossible for any substantive exchange of ideas to emerge. Yet, the Democratic National Committee and the media (and to a large extent, the audience -- a.k.a., us) want winners and losers. So winners and losers there will be.

Thus, because we must, here's my take on the non-debate's "winners" and "losers."

LOSER: Planet Earth. Any significant political forum that doesn't place the climate crisis front and center should be assigned a carbon-footprint equivalent and represents one more notch in the coffin of humanity.

LOSER: Joe Biden. His comment that "I'm the only one on this stage who's ever got anything big done," reeks of arrogance. Voters should find it deeply offensive. Add that to Biden's gaffes, flip-flops, rambling references to record players, continued slide in the polls, and failure to keep pace with the fundraising success of Sanders, Warren, and Buttigieg, and Biden is in trouble.

LOSER: Beto O'Rourke ... ouch. Beto's assault against the AR-15 has backfired. I commend him for strong language on the need for sanity in gun laws, but police officers sent into the homes of AR-15 owners who refuse to sell their weapons to the government? Really? Even gun-control advocates see that as a frightening level of government intrusion.

HELD EVEN: Elizabeth Warren took all the tough blows -- many of them low blows. Going forward, she would do well to give a straight-up answer to the question about whether her health care plan will raise taxes on the middle class. That said, despite her new role as designated punching bag, Warren recovered in rounds two and three and did reasonably well.

WINNER: Bernie Sanders dispelled any doubts that his recent heart attack is a matter of concern. He was strong, clear, and energetic in his responses, and gracious toward others on the stage. The announcement of pending endorsements by U.S. Representatives Alexandria Ocasio-Cortez and Ilhan Omar added a huge bounce to Sanders' momentum.

WINNER: Cory Booker had his best on-stage debate performance yet, and carved out an important path as the guy who reminds other kids to play nice.

WINNER: Tom Steyer survived all the anti-billionaire talk and talked about the climate crisis.

And finally ... WINNER: Tulsi Gabbard, for sticking it to the DNC and corporate media.