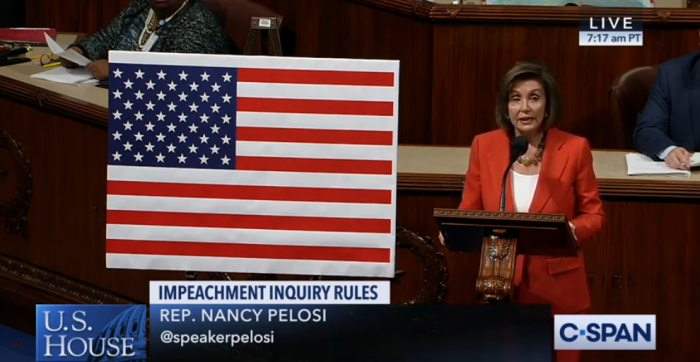 The New York Times explained that the resolution

authorizes the House Intelligence Committee — the panel that has been leading the investigation and conducting private depositions — to convene public hearings and produce a report that will guide the Judiciary Committee as it considers whether to draft articles of impeachment against President Trump.

The measure also gives the president rights in the Judiciary Committee, allowing his lawyers to participate in hearings and giving Republicans the chance to request subpoenas for witnesses and documents. But the White House says it still did not provide “basic due process rights,” and Republicans complain that their ability to issue subpoenas is limited. They would need the consent of Democrats, or a vote of a majority of members. That has been standard in previous modern impeachments. The majority has the final say over how the proceedings unfold.

I enclose below statements from Finkenauer, Loebsack, and U.S. Senator Chuck Grassley. I will update this post as needed with comments from the other members of the Congressional delegation. Grassley’s mind appears to be made up: “This entire process has been contaminated from the beginning and the Senate may have a difficult time taking seriously an impeachment founded on these bases.” That’s comical, given that Iowa’s senior senator voted to remove President Bill Clinton from office on charges stemming from an investigation into unrelated property transactions.

Compared to many of their Democratic colleagues, Finkenauer, Loebsack, and Axne were relatively late to support a formal impeachment inquiry, doing so only after a whistleblower complaint related to U.S. relations with Ukraine gained public attention.

King has repeatedly denounced the investigations of President Donald Trump’s conduct and was part of a group that crashed a closed impeachment hearing last week.

Most political observers expect the House to approve articles of impeachment eventually. The main question is whether those articles will focus narrowly on Trump’s attempt to pressure Ukrainian officials to investigate his political opponents, or will also encompass other high crimes, such as obstruction of justice, failure to comply with Congressional subpoenas, or accepting payments from foreign governments in violation of the emoluments clause of the U.S. Constitution.

In an apparent effort to shore up the president’s support among U.S. Senate Republicans, Trump’s campaign sent a fundraising appeal on October 30 urging donors to contribute to the president as well as three GOP senators, including Iowa’s Joni Ernst, Alex Isenstadt reported for Politico. Ernst signed on to a resolution last week denouncing the House inquiry and characterized the investigation as a “political show.”

Ari Berman commented on Twitter, “For all those people calling impeachment vote a ‘coup,’ worth noting Trump lost popular vote by 2.9 million votes while Dem House candidates won it by 9.7 million votes in 2018.”

“With the new information and testimony coming out, it only reinforces the concerns around President Trump’s conduct. We are now seeing more evidence that draws a clearer picture showing the president may have jeopardized national security for his own personal gain. It is important that Congress, and the American people, have more opportunities to learn the facts and understand the full scope of the president’s actions. The ground rules laid out in today’s resolution will make testimony and facts public. It will also give President Trump a more than fair opportunity to defend his actions, going beyond other modern impeachment proceedings. I continue to support the investigations of the congressional committees looking into this matter, and will always stand by and defend the Constitution of the United States.”

“Today is a solemn day in the history of the U.S. House, but because of the serious allegations against the President, the House must continue its due diligence and move this investigation forward. Today’s vote was a necessary step to move to the next stage of the investigation and get all the facts out in the open for the American people to see and make their own judgment. I continue to hold out hope that the administration will end its stonewalling to ensure Congress and the American people are able to follow the evidence where it may lead.”

“House Democrats announced the opening of impeachment proceedings more than a month ago. So far, this process has been defined by its secrecy, lack of due process and fundamental unfairness. This vote is an implicit admission by House Democrats of exactly that. It’s a day late and a dollar short.

“Democrats’ impeachment proceedings are rooted in animus, a lack of rights for the accused, no transparency and anger at the 2016 election results. Even with this long-overdue resolution, House Democrats are still denying House Republicans the unrestricted right to call their own witnesses, to rebut Democratic witnesses and to have the same right to subpoena witnesses that the Democrats have granted themselves. And the president’s counsel still doesn’t have the right to be present and ask questions of witnesses before the Intelligence Committee, which has been given the role the Judiciary Committee has played in the past. This all stands in stark contrast to previous impeachment proceedings.

“As a result, this will continue to be a purely partisan and political process – a continuation of Democrats’ impeachment obsession that began before President Trump was even inaugurated. This entire process has been contaminated from the beginning and the Senate may have a difficult time taking seriously an impeachment founded on these bases.”

On January 20, 2017, President Trump was sworn into office and became our nation’s 45th president.

Now, most presidents enjoy what political scientists refer to as a “honeymoon” period, where they are given a chance to push their agenda and partisan politics take a backseat.

But not this president. On his inauguration day, a Washington Post headline read: “The campaign to impeach President Trump has begun.”

That campaign has been in full swing ever since. So let’s make no mistake: this process isn’t about concerns over alleged high crimes or misdemeanors.

This is about the Democratic Party, still bitter years later, trying to undo the 2016 election.

I ask unanimous consent that this Washington Post article from January 20, 2017 be entered into the Congressional Record.

WASHINGTON – Today, Congresswoman Cindy Axne released a statement on her vote on H. Res. 660, which establishes the procedures for the public phase of the House impeachment inquiry.

“I’ve heard from Iowans across my district, and people on all sides want to get to the bottom of what happened in an open transparent process that follows the law. That’s what I voted for today—a path forward for fair hearings that are open to the public and will give the American people the facts they deserve.”

“I came to Congress to work for the middle class–getting people better health care and better-paying jobs while making the federal government more accountable. That work remains my number one priority. While the investigation continues, I will continue to work on lowering health care and drug costs, increasing access to job training programs, and helping people affected by natural disasters in Iowa.”

House Resolution 660 outlines a public process that provides rules for open hearings in the House Intelligence Committee and authorizes the public release of deposition transcripts. It protects the rights of the president, makes the witness testimony of those before the House Intelligence Committee public, and follows regular order set down by the House during the Clinton Investigation. This is not a vote to impeach the president.

King Votes Against House Democrats “Halloween Impeachment Trick”
“President Trump is correct to describe this a witch hunt, and the President’s phrase takes on added significance with the actions of the Democrats in the House today.”

Washington D.C- Congressman Steve King releases this statement following his vote against H. Res. 660, a hyper-partisan impeachment resolution forced thru the House of Representatives today by the House’s Democratic Majority.

“Today is Halloween, and the hyper-partisan, impeach-at-all-costs, Democratic majority in the House has just played a Halloween impeachment trick on all of America,” said King. “I reject the Democrats’ efforts to legitimize this sham impeachment process, and all Americans should be concerned that the person most empowered by the House impeachment resolution voted on today is Rep. Adam Schiff, a man who just faced a censure effort based on his efforts to deceive the American public on this subject, and who has just had an ethics complaint filed against him as well. President Trump is correct to describe this a witch hunt, and the President’s phrase takes on added significance with the actions of the Democrats in the House today.”

H.R. 660 passed the House of Representatives today on a hyper-partisan vote of 232-196 with King voting against the legislation. Not a single House Republican member voted in favor of the Democrats’ impeachment resolution, and two House Democrats joined with Republicans in opposition to the resolution. As a result of these votes, only those in opposition to the impeachment resolution can be said to have acted in a bi-partisan fashion.

On October 23, Congressman King joined with many of his colleagues to storm the SCIF in which Rep. Adam Schiff has been conducting impeachment proceedings behind closed doors. King has previously referred to the Democrats’ sham impeachment proceedings as the “greatest atrocity I’ve seen” in Congress, and King has demanded greater public transparency in the process.

On October 21, Congressman King voted in support of a resolution, H. Res. 647, that “censures and condemns Representative Adam Schiff for conduct that misleads the American people in a way that is not befitting an elected Member of the House of Representatives.” King has previously discussed the importance of this resolution, and those comments may be seen here.

The censure resolution specifically references actions taken by Rep. Schiff as Chairman of the House Intelligence Committee, when, during a hearing held on September 26, “instead of quoting directly from the available transcript, Chairman Schiff manufactured a false retelling of the conversation between President Trump and President Zelensky.” The resolution states, “this egregiously false and fabricated retelling had no relationship to the call itself” and these actions “misled the American people, bring disrepute upon the House of Representatives and make a mockery of the impeachment process, one of this chamber’s most solemn constitutional duties.”