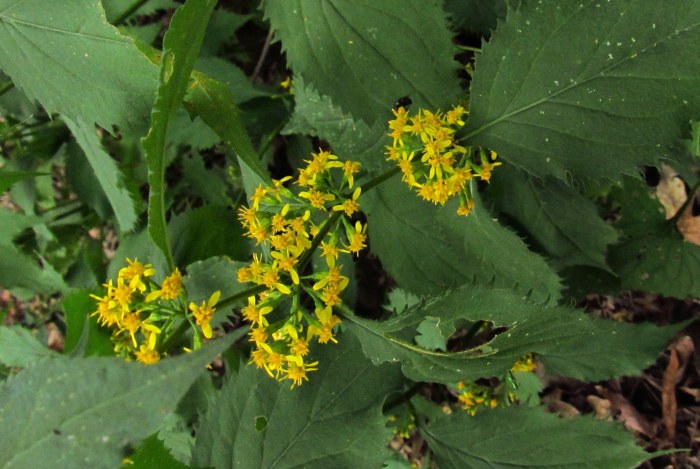 Of more than 200 kinds of wildflowers Bleeding Heartland has featured since 2012, none had a common name beginning with the letter Z--until today.

Zigzag goldenrod (Solidago flexicaulis) is native to much of the U.S. and Canada east of the Rocky Mountains and thrives in shady wooded habitats. I haven't encountered this plant often in the wild. Fortunately, Kim El-Baroudi allowed me to explore her lovely Des Moines backyard, where I took all of the enclosed pictures in early October.

Several clusters of zigzag goldenrod are growing near Kim's home. This shot shows one small group. The bright pink flowers on the right are a pink variety of turtlehead from a garden store.. 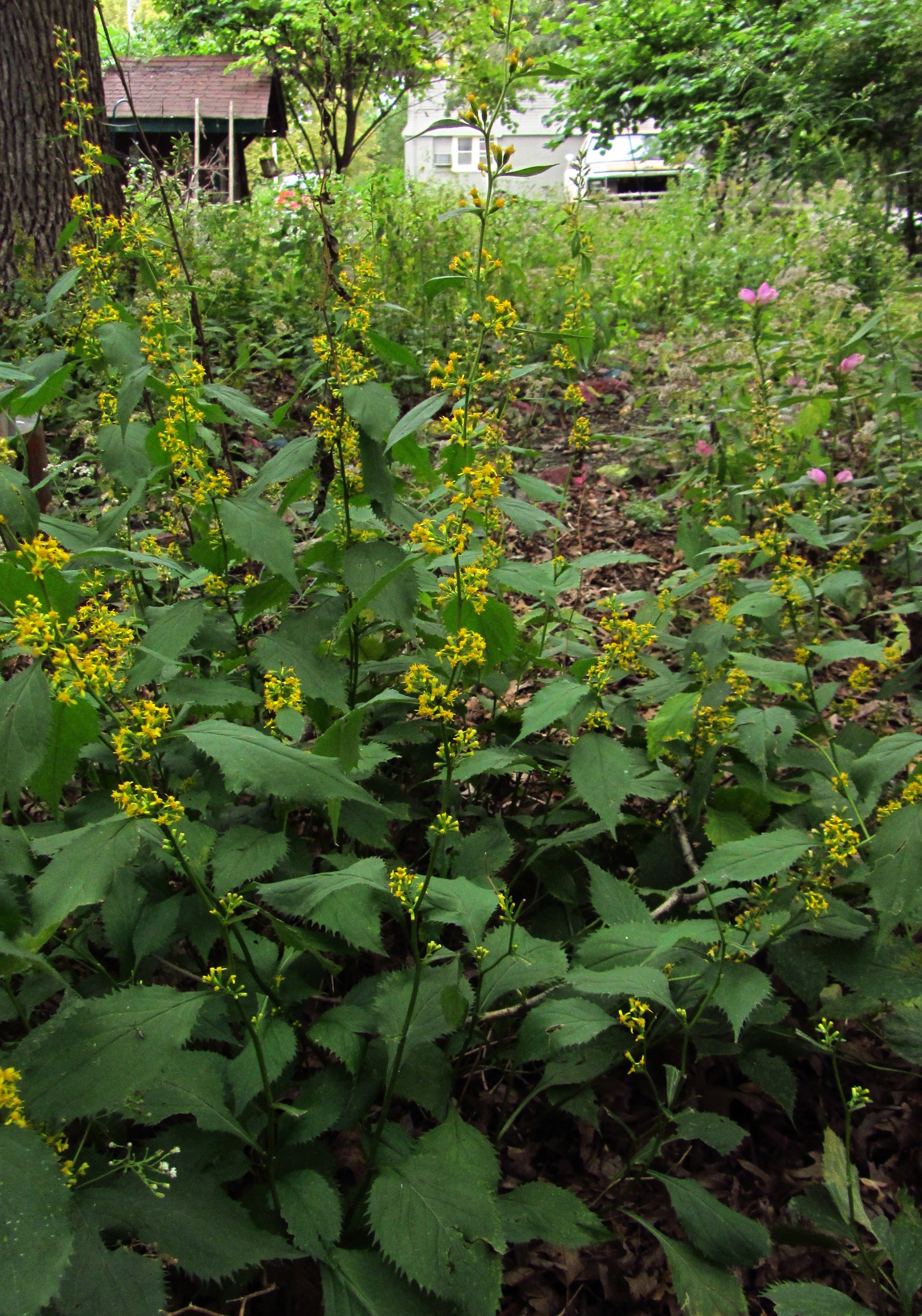 While many goldenrod species are hard to distinguish from one another, zigzag goldenrod's a bit easier to identify, thanks to the stem that "has a tendency to zigzag between the alternate leaves." I found the shape was easier to capture when photographing with pavement in the background. 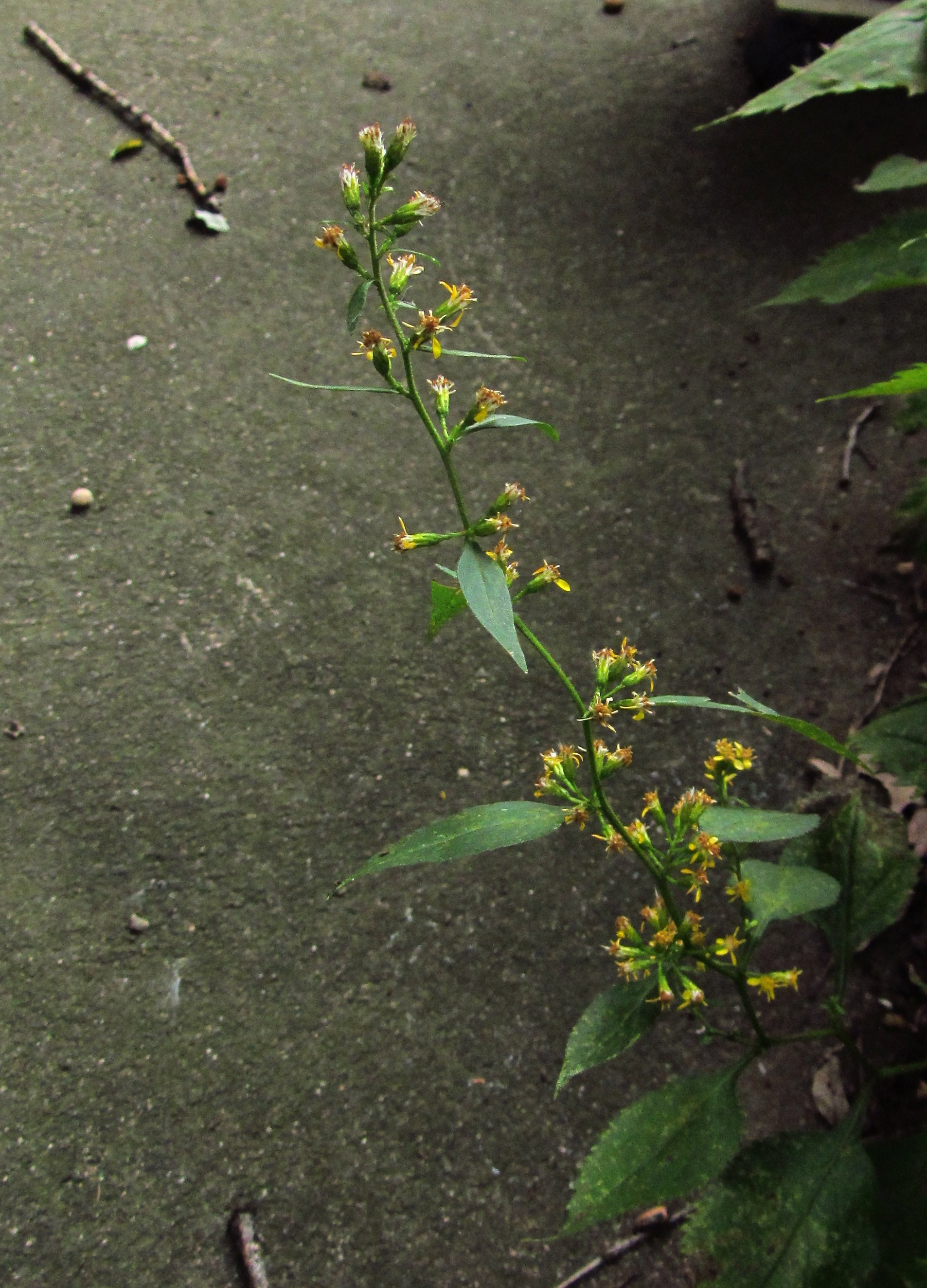 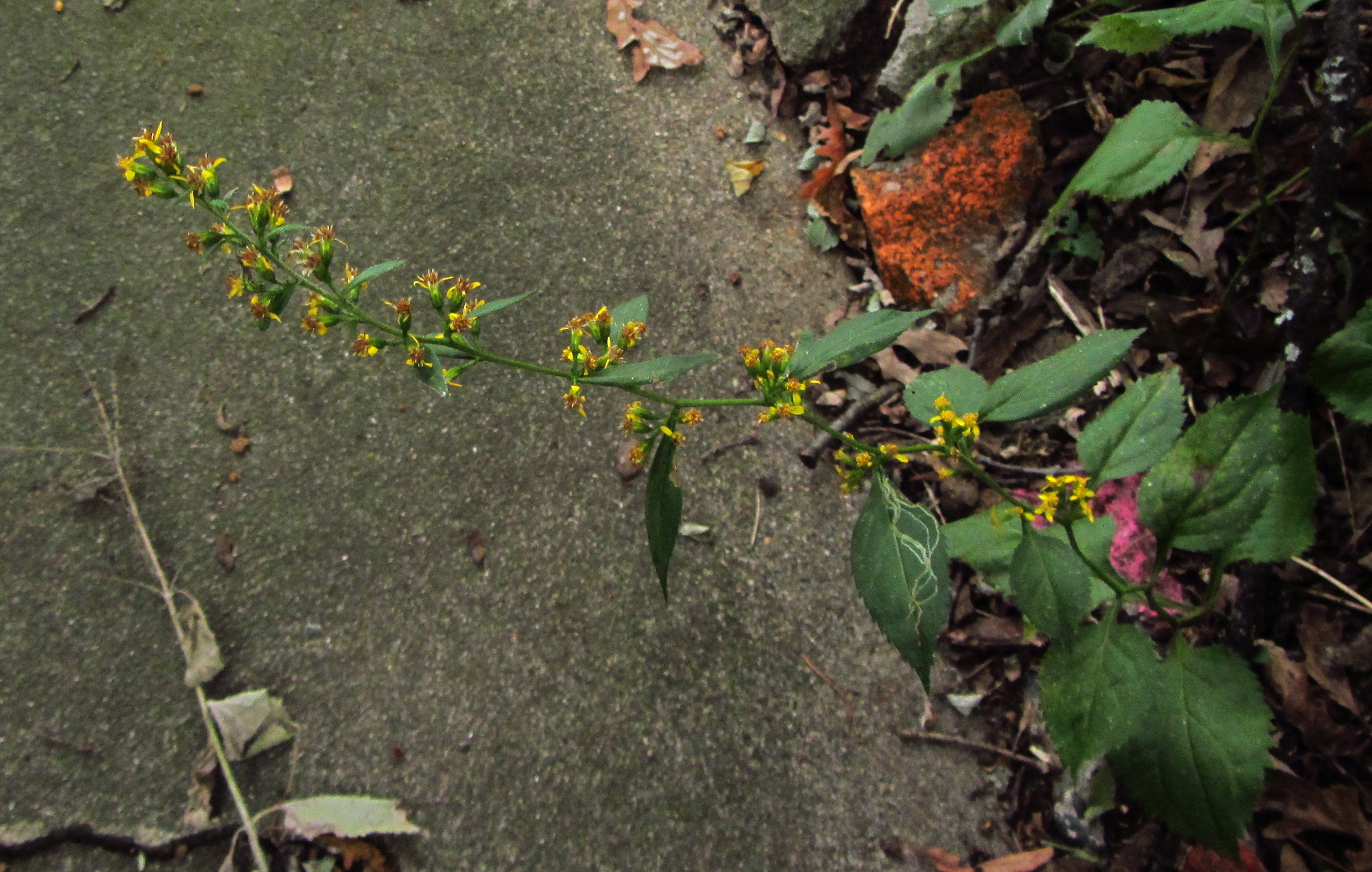 The Illinois Wildflowers and Minnesota Wildflowers websites have botanically accurate descriptions of zigzag goldenrod foliage, flowers, and fruit. The "coarsely toothed leaves" are another distinguishing feature of this plant. 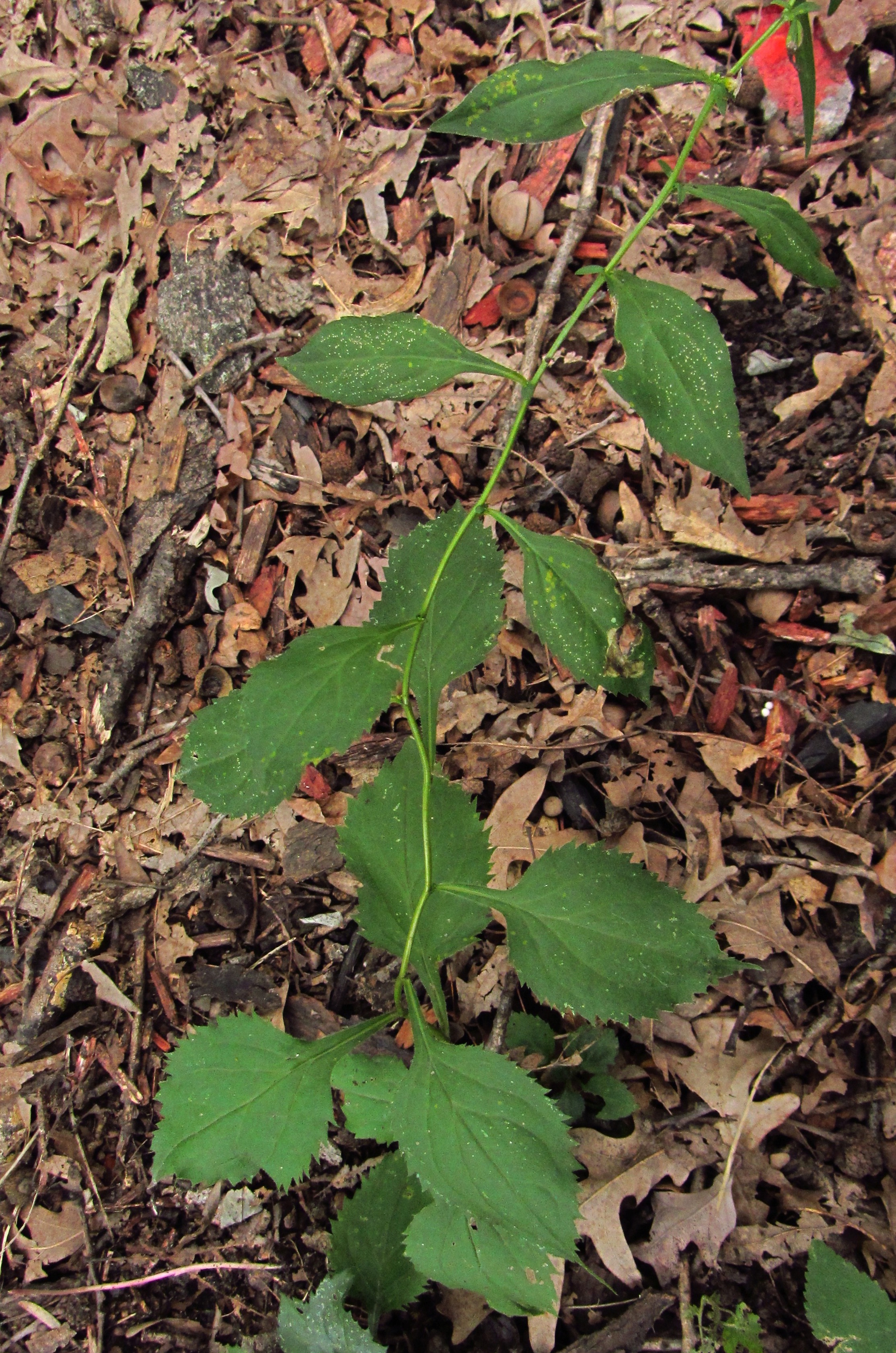 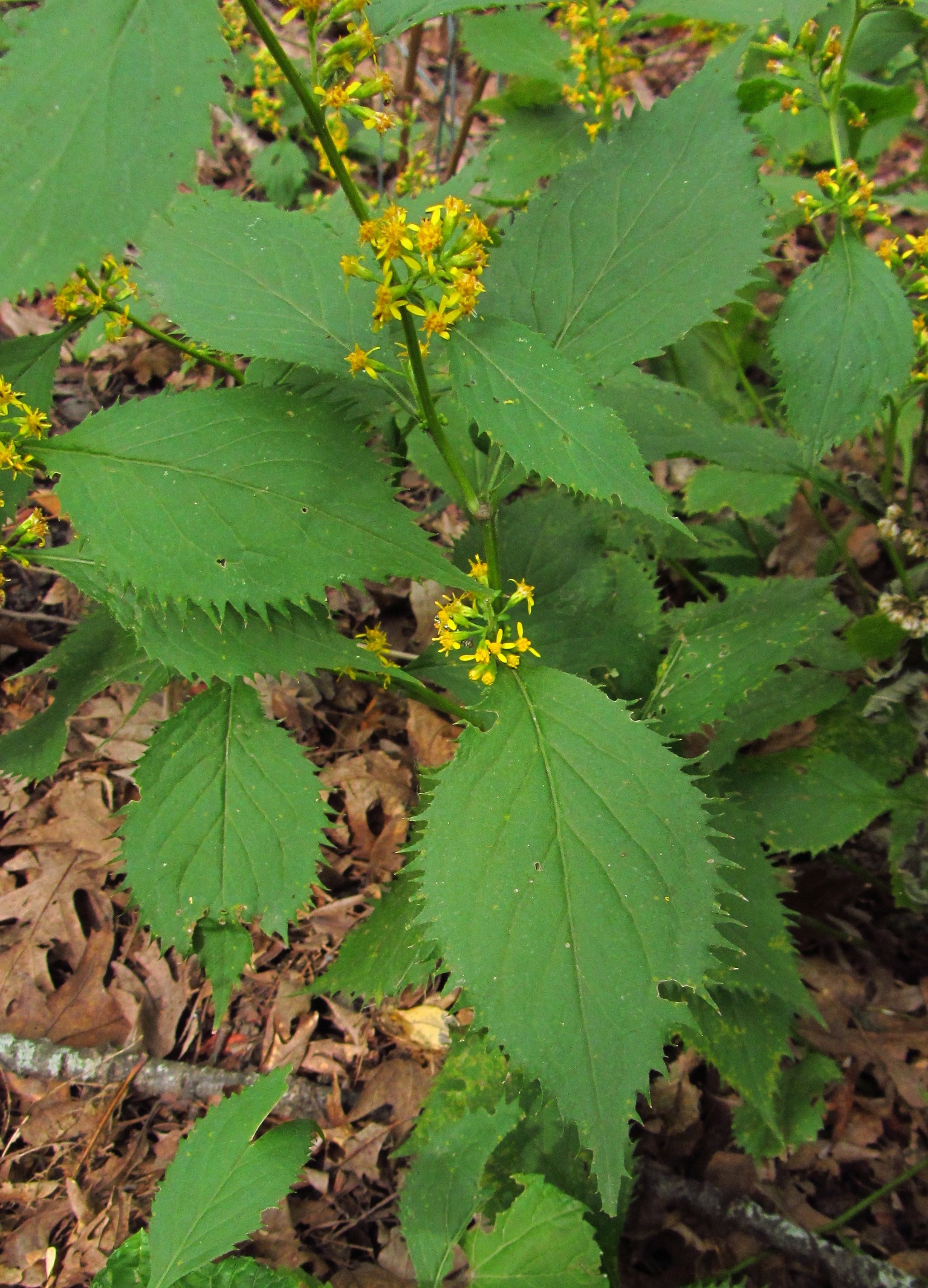 As with other species in the aster family, what look like individual flowers at first glance are actually flowerheads with "3-4 yellow ray florets, 4-8 yellow disk florets, and several series of floral bracts at its base." They start blooming near the top and work their way down. The plants in this shot have mostly buds with some flowerheads open. 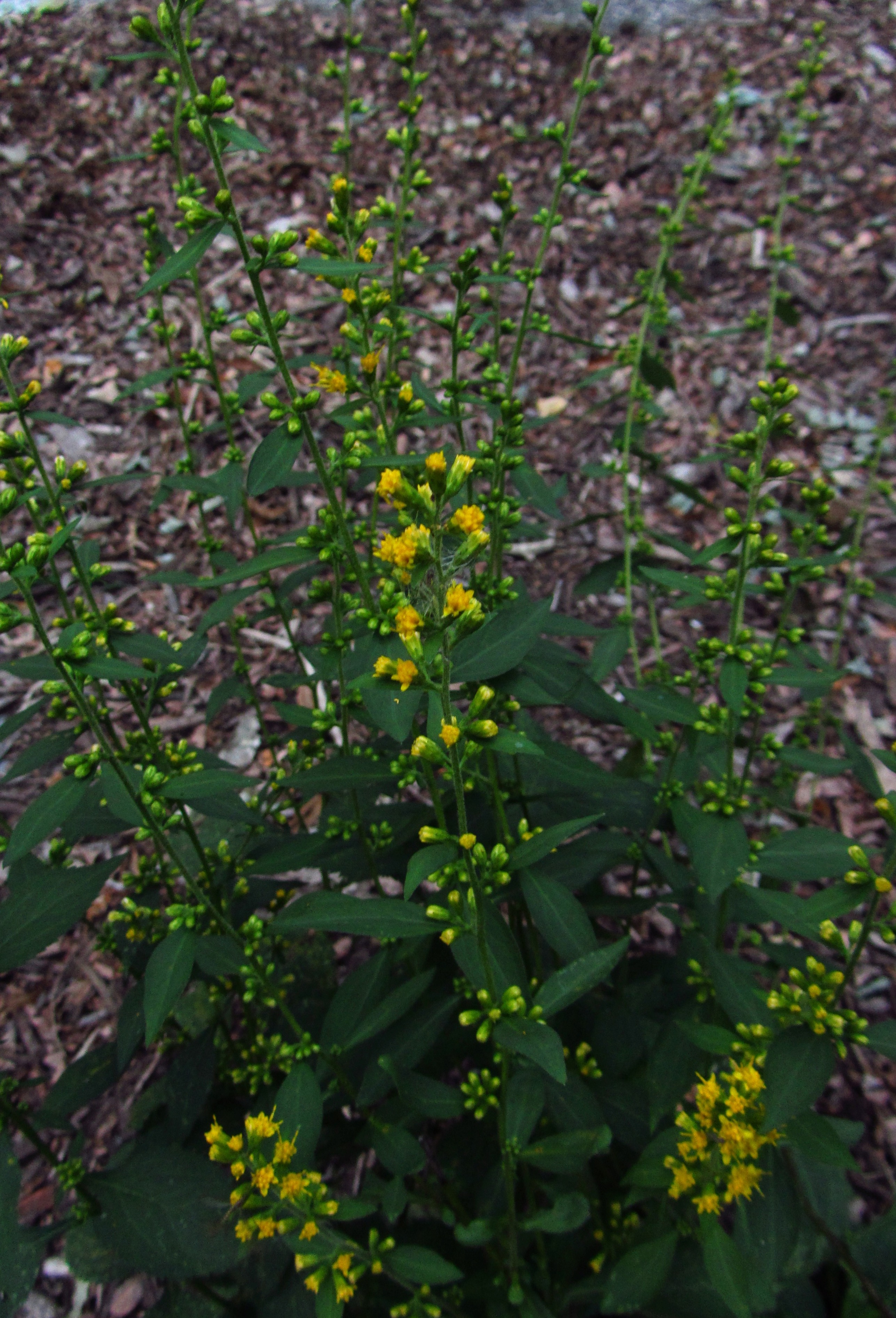 A closer look at the inflorescence: 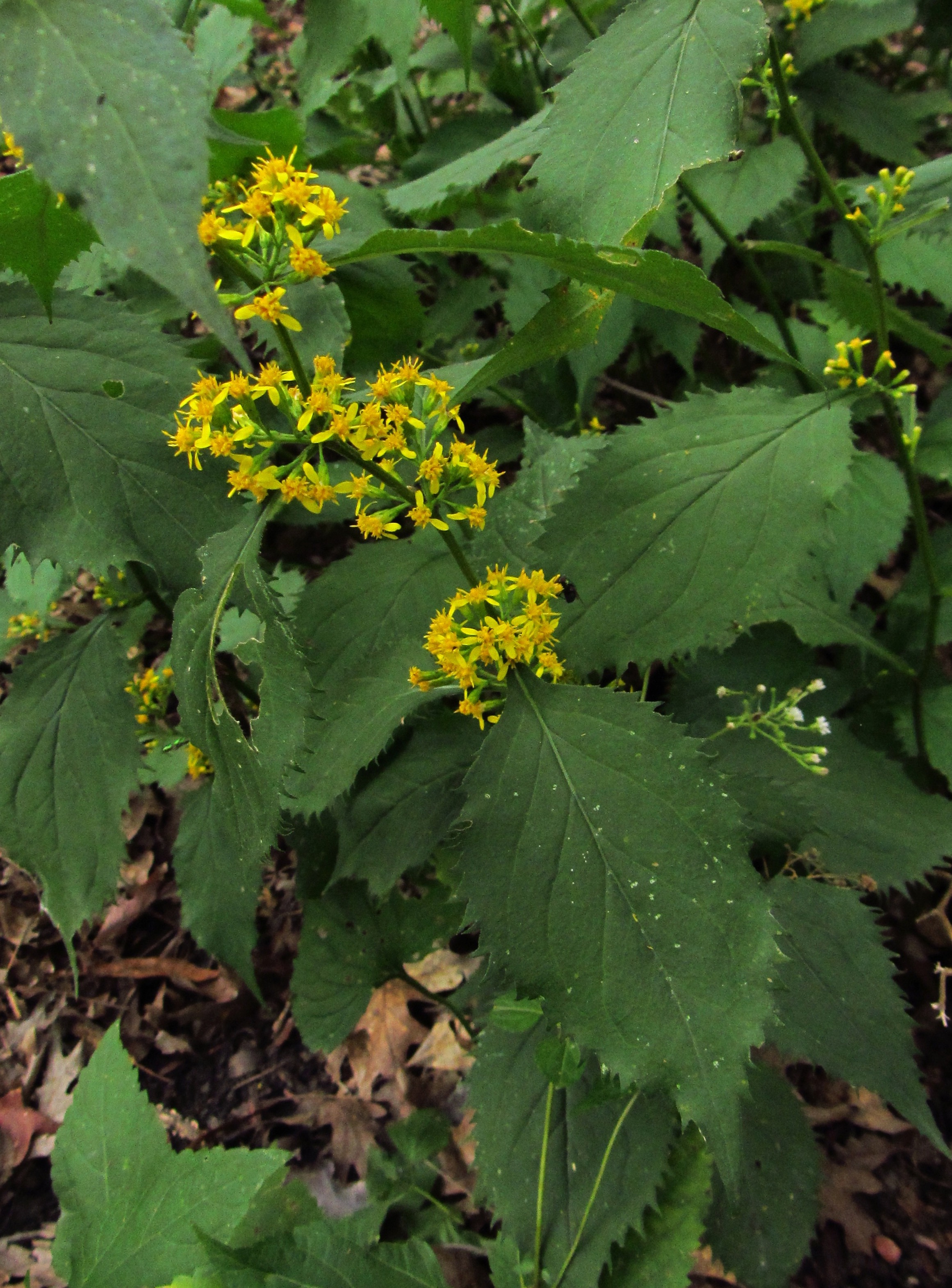 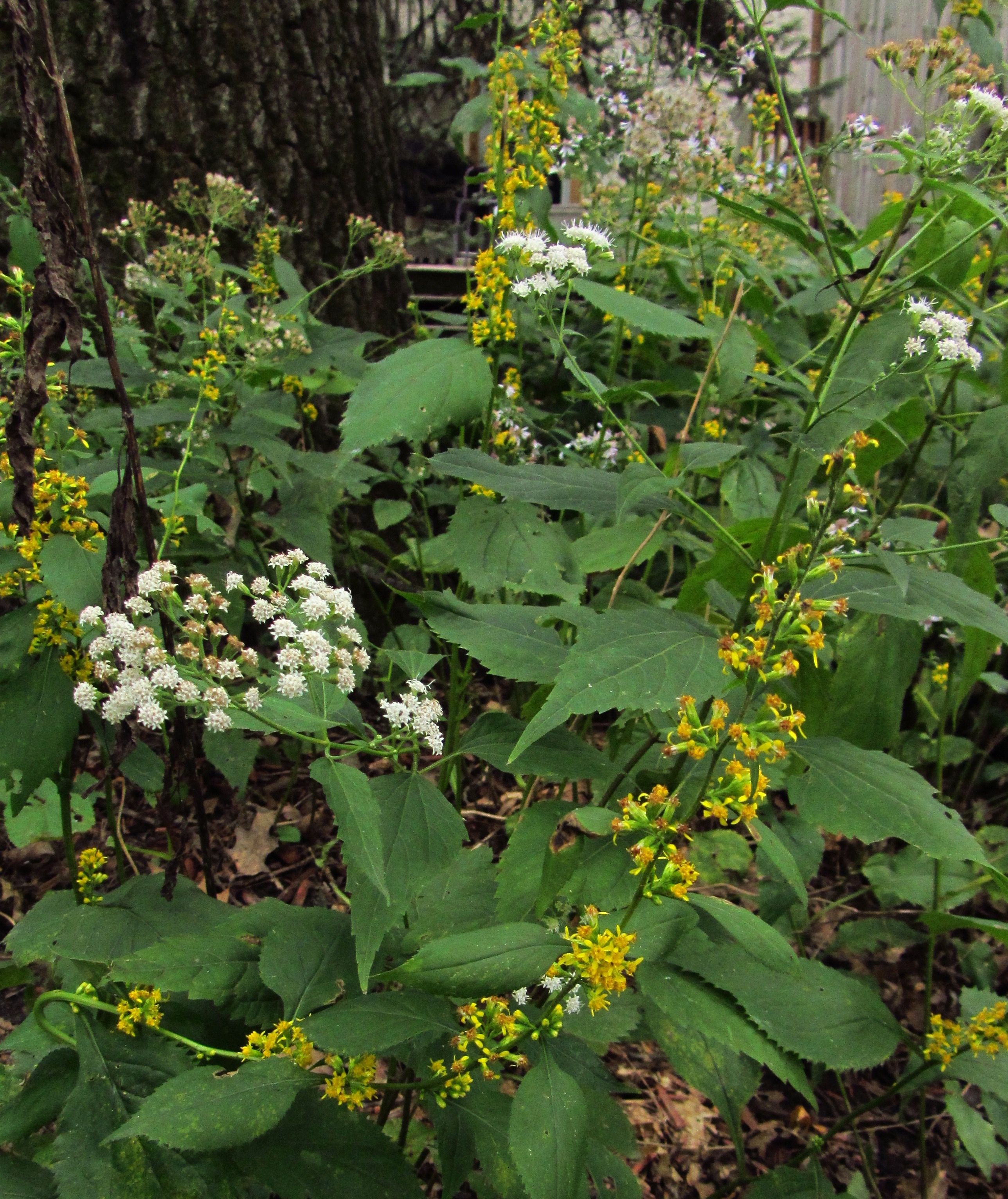 The plants on the left are called blue wood aster or heart-leaved aster. 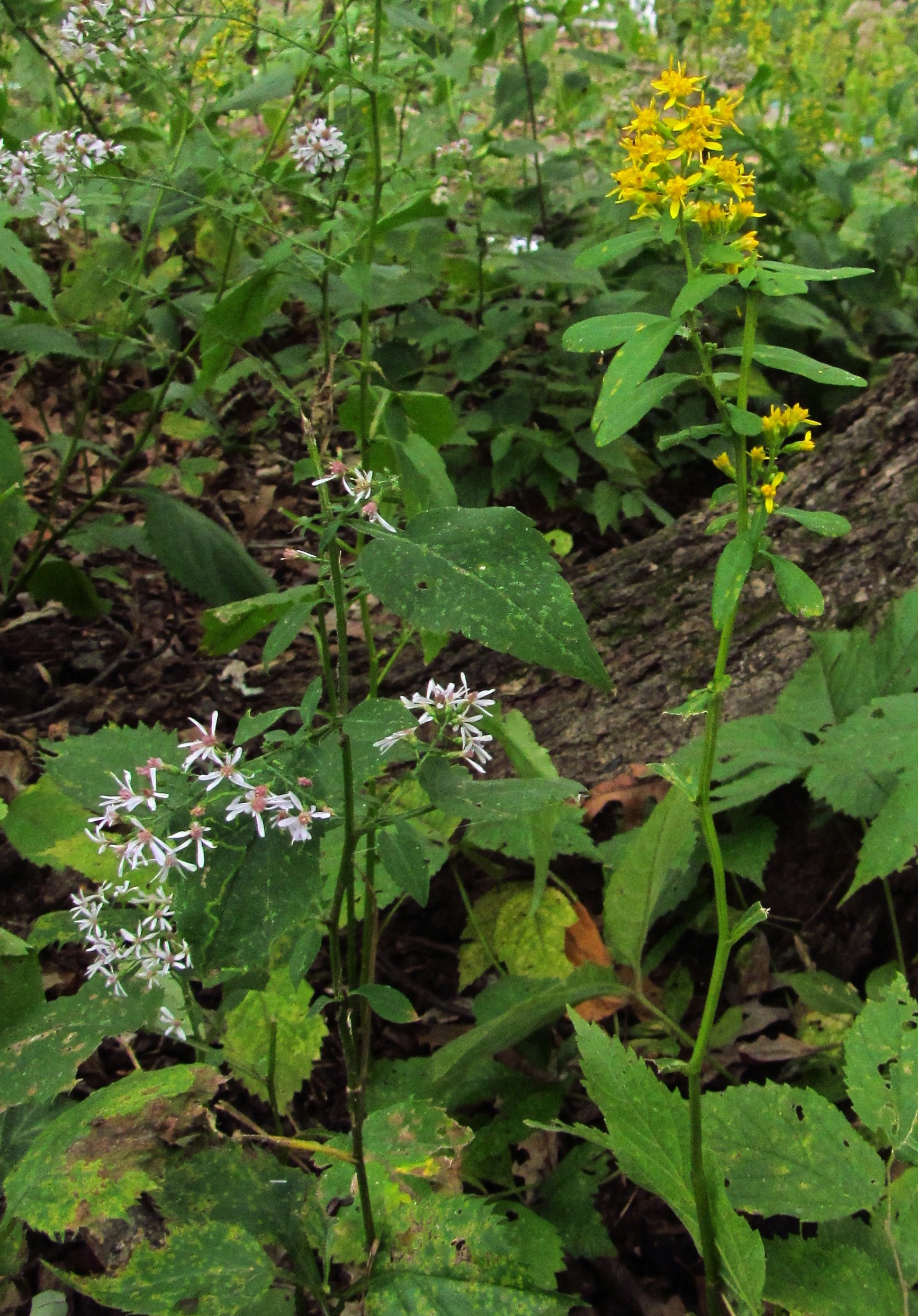 More heart-leaved aster is in the background here. The zigzag goldenrod in the foreground has mostly finished blooming. 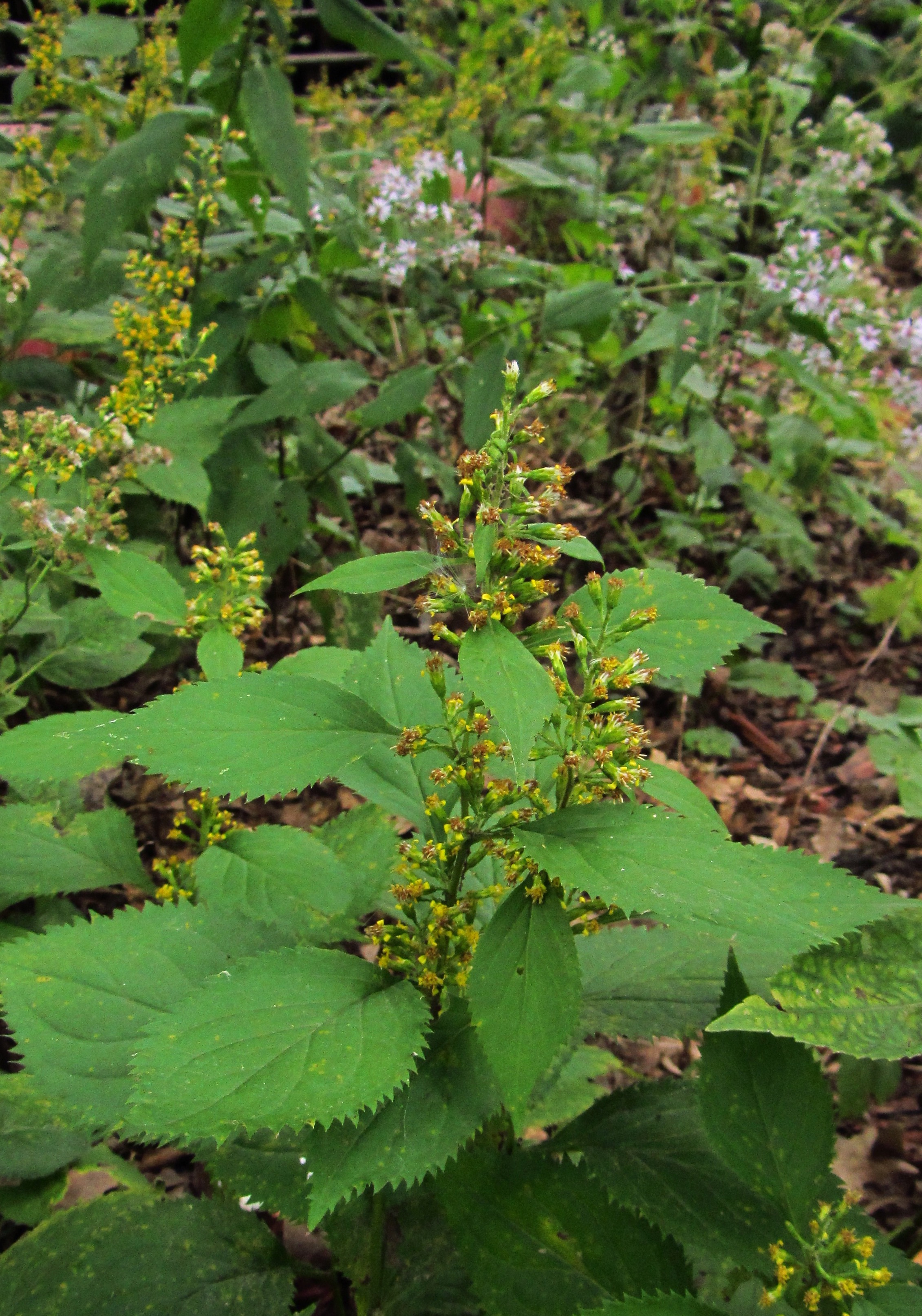 Near the top, zigzag goldenrod flowerheads on the taller plant are past their prime. Lower down, they are near their peak. 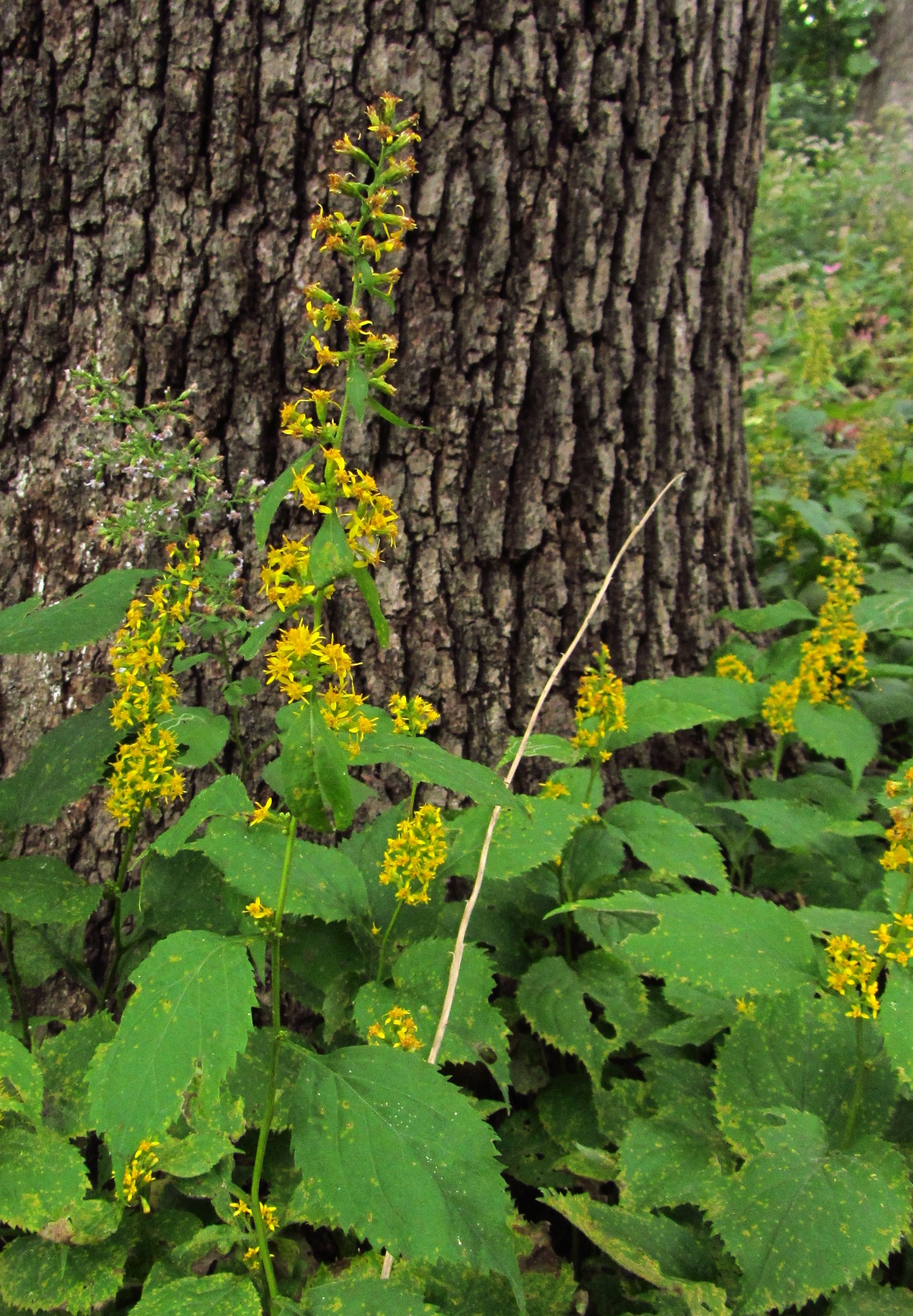 Minnesota Wildflowers describes zigzag goldenrod fruit as "a dry seed with a tuft of light brown hair to carry it off in the wind." The plant in the foreground has gone to seed. 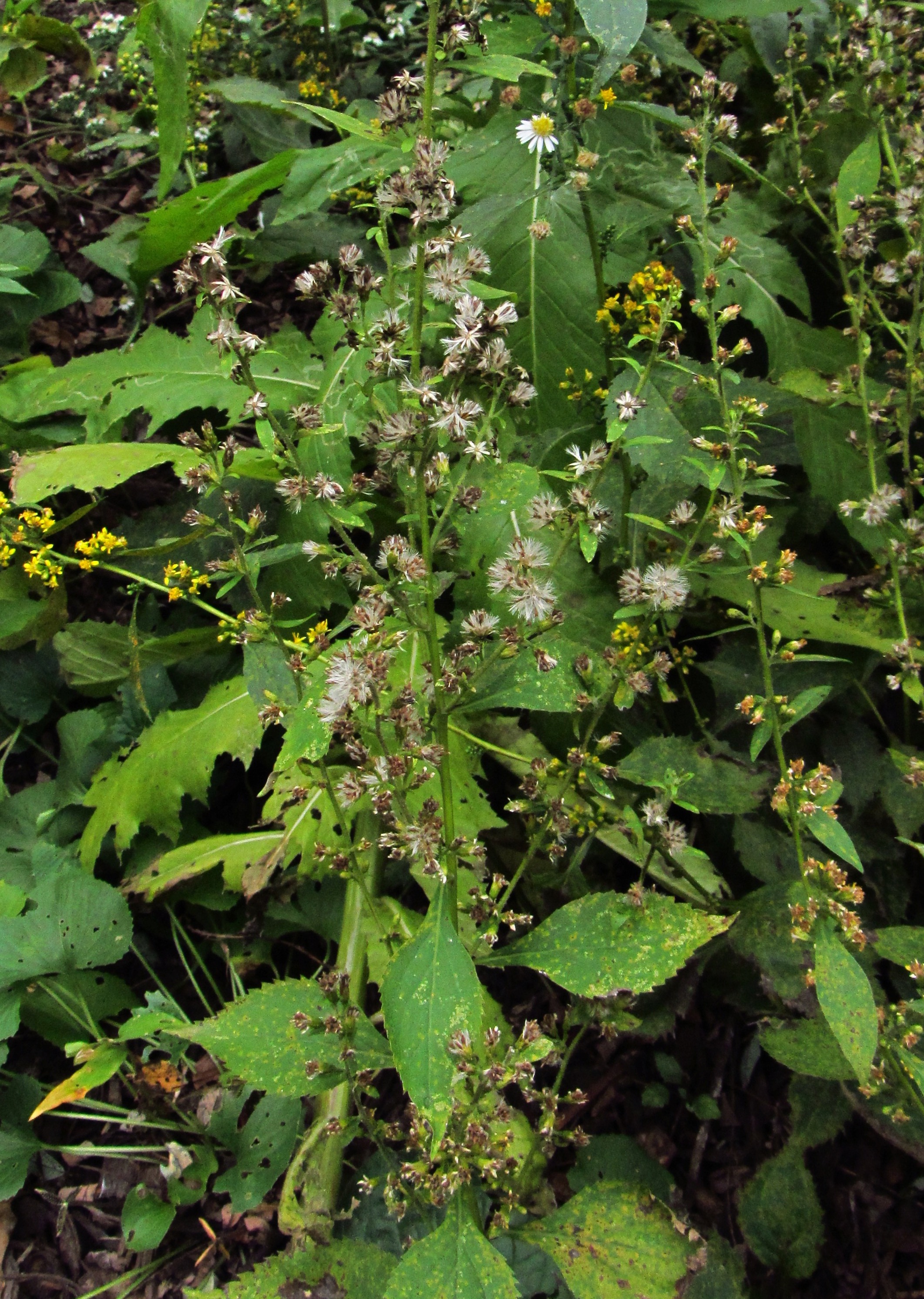