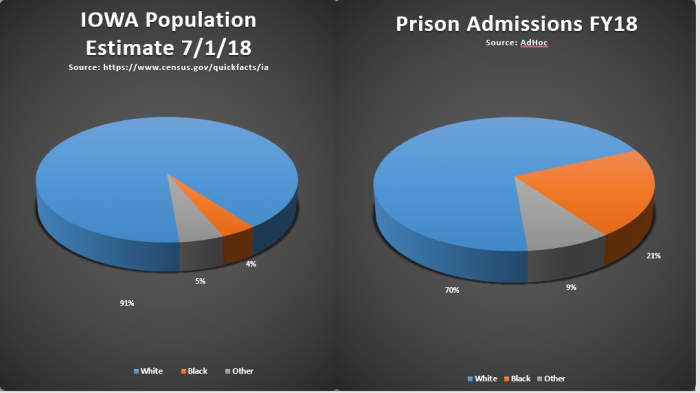 Iowa has long had one of the country's worst racial disparities in the criminal justice system. A 2016 report by Ashley Nellis for The Sentencing Project showed the incarceration rate for African Americans in Iowa was the fourth-highest among the 50 states, with approximately one in seventeen adult black males imprisoned. Iowa ranked third-worst in the nation for racial disparity, with an incarceration rate for African Americans eleven times higher than the rate for white people.

"A CULTURE CHANGE IS NEEDED"

The department manages nine prisons housing some 8,200 people convicted of criminal offenses as well as correctional services "that supervise about 30,800 people in the community on any given day"--about 1 percent of Iowans. While African Americans represent roughly 3 percent of the state population, they make up roughly a quarter of the incarcerated population and 21 percent of prison admissions in 2018.

The key paragraph commits the department to "fair and equitable" treatment of those under its supervision, administrative processes "not influenced by stereotypes or bias based on race," and monitoring to continually improve compliance.

According to the agency's communications director Cord Overton, all Department of Corrections staff completed an online implicit bias training before the end of fiscal year 2019 on June 30. An "Important message from the DOC Leadership" (enclosed in full below) prefaced the online training. Excerpts, with emphasis in original:

New hires also receive instruction on implicit bias as part of their training, Overton confirmed. Going forward, he said, "there will be a yearly 'refresher' training required by all staff as part of annual e-learnings that staff are required to take."

Everyone working in Iowa prisons or community-based corrections will also complete a four-hour class on implicit bias within the next two years, Overton said. Rather than bringing in an outside contractor to facilitate the sessions, as is standard practice for corporations or smaller government entities, the Department of Corrections is training some of its own staff to teach those classes.

Robin Bagby, statewide Prison Rape Elimination Act coordinator for the department, spoke about the training at the Iowa Summit on Justice and Disparities, which the NAACP held in Ankeny on October 15. Several slides from her PowerPoint presentation (also enclosed below) highlighted the goals of helping corrections employees understand concepts like the difference between "equality" and "equity," where implicit bias comes from, and how unconscious bias can affect "your work environment, your interactions with clients and co-workers, and the decisions you make."

Training employees doesn't magically change a culture. One of the most important parts of the new racial disparity policy will require annual reports from every prison and community-based corrections district on specific metrics, such as how Iowans under supervision are classified, the distribution of incarcerated individuals by race for work assignments, intervention programs, educational services, disciplinary reports, grievances submitted, and parole violations leading to revocations to prison.

Speaking on a panel at last month's justice summit, Iowa Department of Corrections Director Beth Skinner explained that the reporting is designed "to make sure that if we identify disparities, we're going to lift up that hood and say, what's going on? Have we developed some type of barrier or policy or practice that's causing a disparity in our system?"

By way of example, Skinner said that if an annual report shows 4 percent of white inmates at a given facility had disciplinary write-ups but 65 percent of African Americans received some kind of discipline, "we're going to look at that." The department's research director will test for statistical significance, and if they find a racial disparity, they will ask why and "address it with an action plan that has to be followed up on."

By regularly collecting such information and taking steps to mitigate problems, the department hopes to find fewer disparities over time in all aspects of the system, Skinner said. Bagby's PowerPoint indicated that analysis of registered apprenticeship programs in Iowa correctional facilities found no disparities between races for those participating.

Bleeding Heartland requested an example of the annual reports facilities will need to file. Overton said, "The first data pull will be January 1, 2020. This will give our research department a 'baseline' from which to start tracking statistics. The next measure will be taken in March or early April."

Governor Kim Reynolds named Skinner to a new committee that will examine ways to reduce racial disparities in all aspects of criminal justice in Iowa. The Governor’s FOCUS Committee on Criminal Justice Reform held its first public meeting on November 7.

Final note: Skinner mentioned at the justice summit that her agency is looking to hire more people representing racial minorities. "We want a diverse workforce in corrections. We want to reflect the population we serve. So that has become a priority for us as well." Bleeding Heartland intends to track the Department of Corrections' progress in that area.

Appendix 1: Racial Disparity Policy adopted by the Iowa Board of Corrections in October 2018

Important message from the DOC Leadership on the importance of addressing and eliminating racial disparity in the corrections system.

Our goal is to respond to and mitigate racial disparities, to practice fair and equitable distribution of benefits in supervision and programming for all IDOC/DCS Incarcerated individuals/clients.

In order to hold ourselves accountable on all levels where disparity prevails, we wish to ensure respect and fair treatment in our overall correctional practices and procedures through adopting the Racial Disparity policy and to provide training for all staff.

The hope is that as a team, our IDOC/DCS employees, volunteers, and contractors will be relentless in eliminating any barriers to fulfilling our mission and for preparing each Individual for a successful reentry.

Appendix 3: PowerPoint presentation delivered by Robin Bagby at the 7th Annual Summit on Justice and Disparities in Ankeny, Iowa on October 15, 2019. Bagby is statewide PREA [Prison Rape Elimination Act] coordinator for the Iowa Department of Corrections.

Slide 13 didn't show up in the document, but the department sent it separately in response to Bleeding Heartland's request. 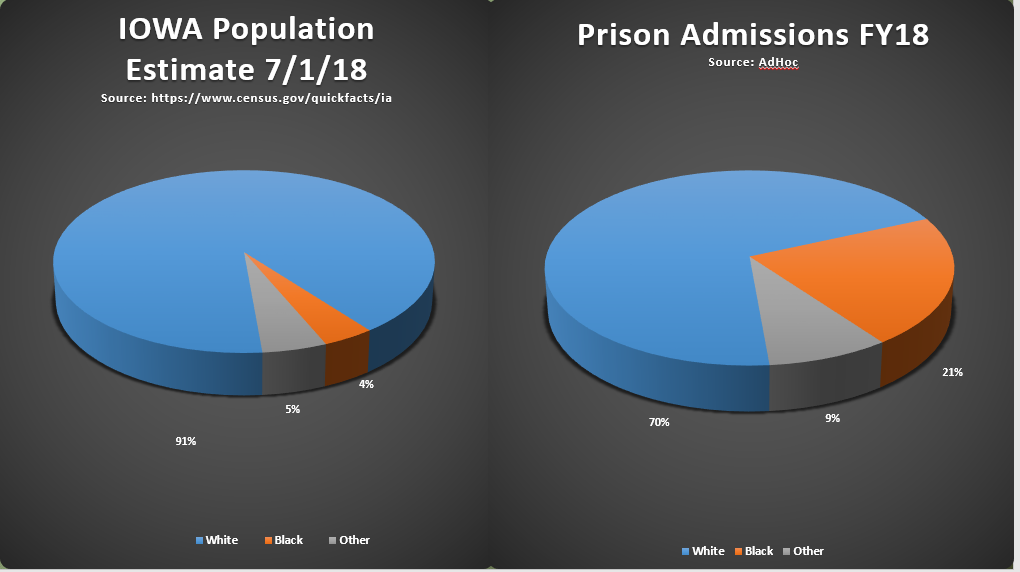