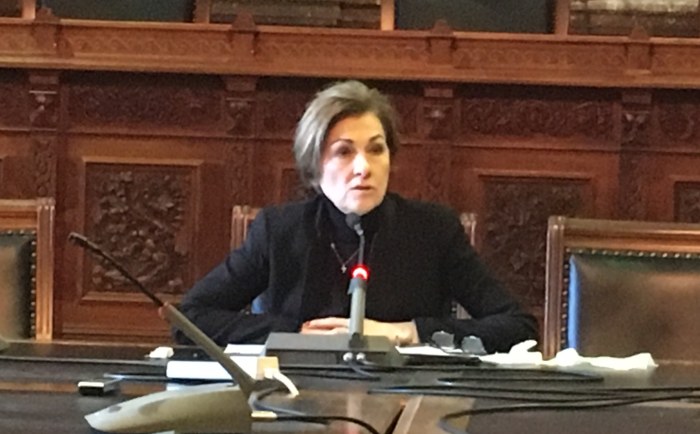 Governor Kim Reynolds promised this week that 347 people who have asked her to restore their voting rights will have their applications reviewed in time for the Iowa caucuses on February 3.

“We’re not where we need to be” on processing those applications promptly, Reynolds acknowledged during a January 7 forum for statehouse reporters, organized by the Associated Press.

Last March, while rolling out the third attempt to “streamline” how Iowans with felony convictions can apply to regain their voting rights, Reynolds set a goal of processing such documents within a month. But her staff confirmed in November that hundreds of applications were pending review in the governor’s office or the Department of Public Safety, which checks to make sure individuals have completed their felony sentences and haven’t committed new crimes.

Speaking to reporters on January 7, Reynolds said 80 of the 347 people whose voting rights applications were pending had submitted their paperwork during the previous 30 days. She added that those who want to participate in the precinct caucuses “need to get that application in as soon as possible, and we’ll do everything that we can to get them through the process.”

Asked whether additional staff or other changes were needed to clear the backlog, Reynolds referred to a new policy Department of Corrections Director Beth Skinner implemented last month. Iowans completing prison sentences or community supervision (probation or parole) will get help from corrections officers to fill out the voting rights restoration forms. “We think that will help,” Reynolds said. Once the Department of Corrections has verified that a person is entitled to get voting rights back, applications won’t require a second background check at the Department of Public Safety, as long as the applications reach the governor’s office promptly after discharge.

The Department of Corrections has indicated that around 5,000 Iowans complete a felony conviction sentence annually. Whether the governor’s office can process hundreds of applications a month (assuming most turn in the forms) remains to be seen.

Most of some 52,000 people who are ineligible to vote in Iowa because of a criminal record aren’t currently under supervision. Their applications will still require additional review at the Department of Public Safety.

Reynolds said she’s “very optimistic” about getting lawmakers to approve a state constitutional amendment creating a more automatic process for restoring voting rights. Last year, the Iowa House approved such an amendment, but the bill is stuck in the Senate Judiciary Committee. Key Senate Republicans want to keep those who committed the most serious crimes ineligible to vote for life, or favor making voting rights contingent on full payment of court fees and fines. That policy would be tantamount to a poll tax.

Even if a constitutional amendment clears both legislative chambers this year, it could not come before voters for approval until 2022, and then only if the next legislature approved identical wording in 2021 or 2022.

Speaking at this week’s AP forum, Iowa House Minority Leader Todd Prichard called on the Senate to make the voting rights bill a priority, because reform would help people re-enter society and reduce recidivism. But he added,

The governor has a tool in her toolbox right now. She has the executive order. She can use it, she can restore these rights. Past governors have done it. Iowa, in my mind, has a black eye on this issue. We’re not with the rest of the country, and it’s time we catch up. […]

This hesitation is preventing people who by right should be able to vote.

Iowa Senate Minority Leader Janet Petersen highlighted the state’s flawed felon voter list, warning that if Reynolds doesn’t sign an executive order, “I fully expect the secretary of state to be asking Iowa taxpayers to foot the bill to clean up a list that could put Iowa in jeopardy of another lawsuit.” A Des Moines Register investigation in early 2019 found “the ballots of more than two dozen voters were wrongly rejected since 2017.” The list has multifaceted problems:

In addition, a Register review in September found that at least 69 Iowans who had been convicted in other states, and who had their voting rights restored after serving sentences there, remained on the list of felons ineligible to vote — despite an Iowa policy to recognize such restorations.

On top of that, the Register has identified people whose rights Reynolds restored, yet remain listed in the felon database as ineligible to vote.

Similarly, the Associated Press found numerous errors in its own review of Iowa’s felon database, suggesting that as many as 4 percent of people listed committed misdemeanors that should never have disqualified them from voting.

Reynolds’ stated reasons for not solving the problem with an executive order make little sense. Some legislative observers have speculated that going that route would eliminate any sense of urgency to get the constitutional amendment through the Senate. Perhaps.

But by the same token, GOP lawmakers have little incentive to act as long as they are confident the governor would never take this matter into her own hands. On the contrary: delay and bickering over details on the restoration process suits Republicans, keeping tens of thousands of Iowans (disproportionately people of color and those with low incomes) unable to vote in the next presidential election.

UPDATE: Ryan Foley reported for the Associated Press on January 9 that the Secretary of State’s office has stopped using the felon database and is reconstructing it as each entry is reviewed. Secretary of State Paul Pate pledged in November to fix errors in that database before the 2020 general election.