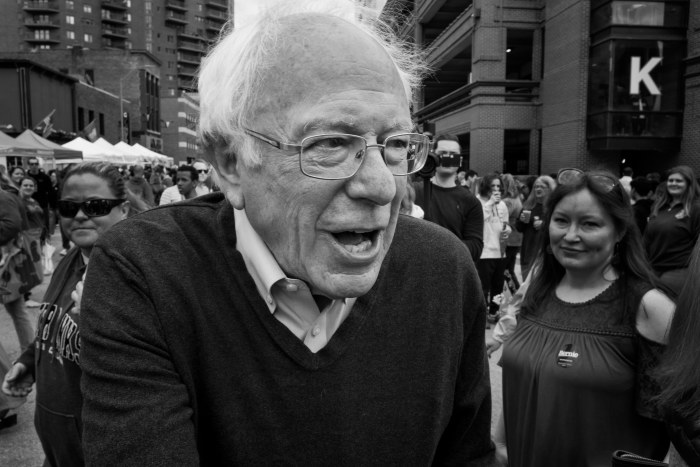 Many believe Joe Biden is the safe candidate, the electable candidate. Not true! Given the electoral college, which makes votes in white, rural states count more than votes in ethically-diverse, urban states, it’s possible no Democrat could beat Donald Trump. But of all the Democratic candidates, Joe Biden is the most likely to lose to Trump. If Democrats nominate Joe Biden, Trump will win re-election.

Look at every presidential election in the last 20 years. Every time a party has nominated the “safe” candidate, the “electable” candidate, Democratic or Republican, that candidate has lost. Al Gore, John Kerry, John McCain, Mitt Romney, and Hillary Clinton were all promoted as “safe” and “electable.” Every one lost.

In contrast, many people thought there was no way George W. Bush, Barack Obama, or Donald Trump could win. Yet they did. In 2020, Joe Biden is the “safe” candidate, the “electable” candidate. If someone voted for Obama in 2008 and 2012 and then voted for Trump in 2016, why would they vote Biden 2020? Again, if Democrats nominate Joe Biden, Trump will be reelected.

Pete Buttigieg’s eloquence and radical ideas elated me at first. As one who aspires to learn additional foreign languages, the idea of a polyglot president gives my language-loving brain a jolt of dopamine. But Mayor Pete’s return to the status quo and his Wall-Street, corporate, and industry financial backers have soured me to his candidacy.

I love some of Andrew Yang’s ideas, but we need a president with political experience.

Amy Klobuchar’s support seems limited to the Midwest, and she has even less African-American support than Pete Buttigieg.

Tom Steyer does a lot of good things with his wealth. Buying his way into the White House is not one of them.

Why Bernie Sanders and not Elizabeth Warren? Warren’s policies are quite close to Bernie’s. I would be happy with either candidate as president. For months I leaned toward Warren, because it is time we had a woman as President and Warren’s detailed policies more clearly show how she would make substantive change.

In person, Warren is personable and caring. That she would get down on one knee to talk to my 7-yr old daughter and 5-yr old son on their level speaks volumes about the character of a person. Because Warren showed enough concern to talk to my daughter on her level, my daughter now tells me when she sees a Warren ad, “That’s Elizabeth Warren, Daddy.” While I was watching the most recent debate on my phone, my daughter saw Elizabeth Warren talking and declared, “I want to listen to Elizabeth Warren.” A Warren Presidency would thrill me. A Bernie/Warren ticket would be my dream team.

However, Warren attracts a smaller demographic coalition than Sanders. Warren’s supporters tend to be whiter and wealthier than Bernie’s supporters. Bernie does well among the working class and the poor – many of whom are Latino and Black. Those earning less than $50,000 a year and who have less than a college degree support Sanders over Warren by more than 10 percent. In fact, Black Americans under-35 support Sanders over Biden (42 percent to 30 percent – Washinton Post-Ipsos Poll).

Young Black and Latino voters’ enthusiasm for Bernie will win their parents and grandparents’ support for Sanders. Conversely, the older Black Americans and Latinos who support Biden will have less success in convincing their children and grandchildren to vote for Biden. In a recent Monmouth poll, more self-identified moderates under 50 support Sanders than Biden (23 percent to 20 percent).

Of the remaining candidates, only Sanders can rebuild and expand on the Obama coalition. In a general election, I predict more Warren supporters shifting to Sanders than Sanders’ supporters shifting to Warren. In 2016, an estimated 12 percent of Sanders’ supporters voted for Trump in the general election. Many of these Trump voters feel that the Democratic party despises and dismisses them. Bernie is the candidate whom a significant number of Trump voters would support. A Sanders’ nomination will also prevent an otherwise significant flight of votes from Democrat to third parties.

Younger voters support Sanders over Biden by a 2 to 1 margin. If Biden wins the nomination I will vote for him, but I will not be motivated to canvass or phone bank for him. But if Sanders (or Warren) win the nomination, I will do everything I can to get them elected. Many voters my age and younger feel the same (I’m 34). Because Iowa is whiter and older than the country as a whole, Biden should have a commanding lead here in Iowa in the polls. The fact that Sanders is equal to or surpasses Biden in many Iowa polls tell me that Bernie Sanders, not Joe Biden, could beat Trump.

The least fortunate among us, the poor, and those with less formal education than other demographics, know what they need and which candidate speaks for them. Which presidential candidate do the poor feel speaks for them? Bernie Sanders.

At this time in our history, which issues are more pressing: cultural/identity politics or socio-economic class/poverty? While racism still rears its ugly head here in the United States, issues of class and economics are far more pressing. Money protects you no matter your skin color. Beyoncé and Jay-Z can afford the finest healthcare in the world. But many poor, working class white Americans are bankrupted by medical bills or die because they cannot afford lifesaving medications. Young Black Americans may be stopped by the police without cause. But if you are poor – white, black, or brown – you will go to jail for a petty crime, while the rich – white, Black, or brown (but mostly white) – can commit the same crime or worse and spend no time in jail. Without money or resources, most of your destiny is determined by forces beyond your control.

Bernie Sanders understands this. More so than other candidates, his vision and policies would lift up the poor, the marginalized, and the less fortunate. Such policies not only are morally right, but economically sound. Each of you must decide who to caucus for on February 3. If you can caucus, please caucus. As you do, think how your vote will affect the least of these, and consider caucusing for Bernie Sanders.

(Views expressed in this piece are the author’s alone and do not necessarily represent the views of his employer or anyone else.)

Top image: Photo by Michael F. Hiatt of Bernie Sanders at the downtown Des Moines farmers market on May 4, 2019, available through Shutterstock.