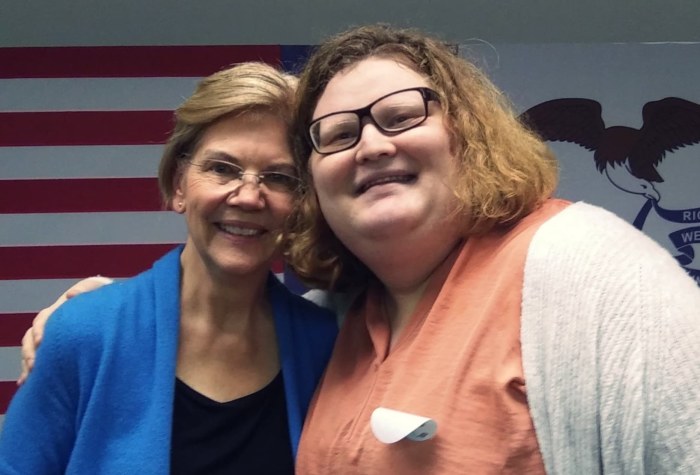 I’m endorsing Massachusetts Senator Elizabeth Warren for president, not because anyone told me to, but because I believe she is the best candidate in the race with her increasingly broad coalition of people from all walks of life. Whether they are LGBTQ+, a person of color, disabled, poor, working class, or just sick and tired of the system destroying lives.

As a poor, disabled trans woman who identifies with and uses “they” pronouns, I’ve been impressed and excited with how open-armed Elizabeth’s campaign has been to trans and nonbinary people thoughout her entire campaign. It’s not just her campaign though. She actively works to listen and amplify trans voices, particularly working to lift trans women of color voices , even though it may not be super popular among mainstream Democrats.

I am the first transgender chair of the Iowa Democratic Party’s Stonewall Caucus, and I search for allies, but more importantly I search for someone who is more than an ally–someone who is an accomplice. An accomplice to me means you’re actively fighting as a partner in trans liberation, and you are lifting up trans voices, giving platform, and in Elizabeth’s case impacting legislation.

I consider Elizabeth an accomplice, because she has worked with countless trans advocates around this country to craft the best trans policies: from healthcare, free college, criminal justice reform, environment, child-care, disability rights, sex worker rights and I can’t name anymore otherwise I’d be writing this forever. These bold policies are what makes her the most equipped to fight with trans people for our rights as president.

I believe Elizabeth Warren should be our next president to ensure trans liberation truly happens. I know many are still undecided, but can you join me to lift up trans voices with Elizabeth Warren, the candidate with plans that ensure big structural change happens?

Top photo of Elizabeth Warren with Kyla Paterson provided by the author and published with permission.