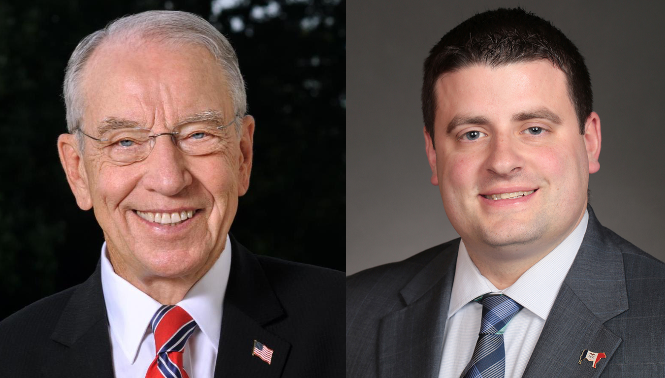 U.S. Senator Chuck Grassley claimed this week that his grandson, Iowa House Speaker Pat Grassley, has “never expressed” interest in replacing him in the U.S. Senate.

Patrick Kinney reported for Iowa Capital Dispatch on the senator’s February 18 appearance at the Cedar Falls Rotary Club. After the event, Grassley said he wouldn’t rule out seeking an eighth U.S. Senate term, noting he’s in good health now at age 86. Eight months to a year before the 2022 election, he will consider whether he could do the job up to the age of 95. He indicated that he would not want to be like former Senators Robert Byrd and Strom Thurmond, who required nursing assistance during their final years in office.

Many Iowa politics watchers in both parties expect Grassley to retire in 2022, and Pat Grassley to seek the GOP nomination to replace him. But Kinney reported,

Asked if he’d back his grandson, Iowa House Speaker Pat Grassley, to succeed him, the senator said, “The answer is yes. But I’d never talk him into it. He’d have to tell me he was interested. And he’s never expressed that to me at this point.”

That’s hard to believe, as the younger Grassley has long been seen as a likely candidate for Senate someday. The senator has actively promoted his grandson’s career. In 2017, he said he would advocate for Pat Grassley to replace Bill Northey as Iowa secretary of agriculture. (Governor Kim Reynolds appointed Mike Naig instead.) Last fall, the elder Grassley made phone calls to Iowa House Republicans when Pat Grassley was competing against then House Majority Leader Chris Hagenow for the speaker’s position.

Assuming Chuck Grassley does not run for re-election in 2022, both parties will probably see competitive Senate primaries. Former acting Attorney General Matt Whitaker, who ran for Senate in 2014 but finished fourth in the five-way GOP primary, could be a formidable candidate, especially if he has President Donald Trump’s backing.

On the Democratic side, several of the five current Senate candidates (Michael Franken, Kimberly Graham, Theresa Greenfield, Eddie Mauro, or Cal Woods) may run again if they don’t win the 2020 nomination, or if they become this year’s nominee but lose to Senator Joni Ernst. State Auditor Rob Sand or U.S. Representative Cindy Axne could be contenders, if they decide against running for governor or for the positions they now hold.

UPDATE: Former State Representative Josh Byrnes commented on Facebook, “I served with Pat in the Iowa House and we were good friends. Pat NEVER spoke of running for that Senate seat. Pat loves farming and spending time at home with his family.”