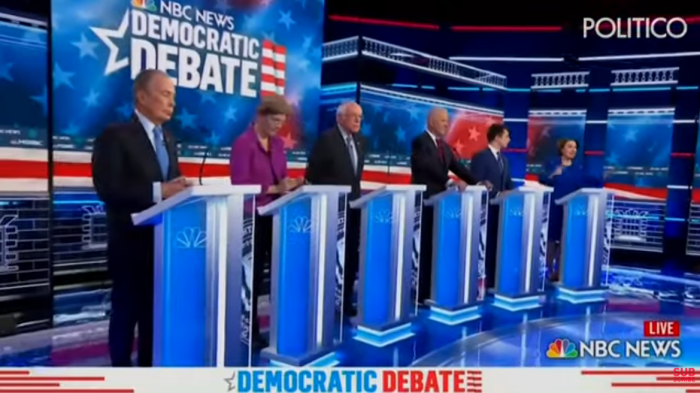 Bloomberg has poured more than $300 million into TV ads running in Super Tuesday states, enabling enough poll recognition that the Democratic National Committee had no choice but to include him in the latest debate. But his appearance was a disaster.

Led largely by Senators Bernie Sanders of Vermont and Elizabeth Warren of Massachusetts, the other five candidates leveled body blow after body blow at him, going after such obvious targets as his dubious support for the city’s stop-and-frisk policing, which disproportionately impacted black and brown residents, slew of sexual harassment complaints from his female employees, and, of course, his money. Supporters said Bloomberg recovered late in the debate, but it wasn’t enough for viewers to see the man behind the curtain.

If Bloomberg was the obvious loser of the debate, was there a winner? Yes. And he wasn’t at the debate. No, not fellow billionaire Tom Steyer, whose estimated $1.6 billion couldn’t even caddy to the New Yorker’s presumed $61.8 billion. No, the winner was Donald Trump.

The debate was part wrestling match, part take-to-the-mattresses gang war, with everyone going after everyone else. Sanders, the front-runner in most national polls, took hits from Warren for his Medicare-for-all plan. Playing Luca Brasi, she also blasted former South Bend Mayor Pete Buttigieg and fellow Senator Amy Klobuchar of Minnesota for their health plans, calling them, respectively but without respect, a “PowerPoint” and a “Post-It Note.” The two centrists then went at each other for their experience, or lack of. Joe Biden, the presumptive front-runner since Creation, wasn’t a target, apparently because he’s perceived to not matter anymore.

Sanders’ penchant for not playing well with others came forth when he declared that the candidate with the most delegates should get the nomination even if that figure is not a majority, as Democratic Party rules stipulate. He was the only candidate to say so.

All this points to a convention fight, which, say an overwhelming number of Democratic party strategists, would be a disaster of Titanic proportions. It could even rival the 1968 fiasco in Chicago. Amid a police riot, delegates nominated Hubert Humphrey, Lyndon Johnson’s vice president and heir to the Texan’s unpopular Vietnam War. Humphrey lost to Richard Nixon that year, in an election that veered the Republican Party irrevocably to the far right.

In such a convention, it’s conceivable that Sanders would get what he wants, meaning the Democratic nominee would be the heir to George McGovern. A liberal antiwar activist, the senator from South Dakota suffered the worst Electoral College defeat in U.S. history, to an unpopular president already tainted by the Watergate scandal.

To beat Trump, Democrats desperately need an outpouring of support from independents and other swing voters, most of who tack center. Buttigieg and Klobuchar, the hope of Democratic pragmatists, were polling in single digits even before their Wednesday Rock ‘Em Sock ‘Em Robots performance, which won’t make them any new friends. Criticized for their relationships with their constituencies’ African American communities, neither is expected to do well in next Tuesday in South Carolina, the first state with a substantial black electorate. Warren, who had a great debate, should pick up momentum but probably not enough to knock Sanders off the pole. Which should make the Bernie Bros happy.

Sanders may, in fact, have a clearer shot at the nomination he was convinced was stolen from him in 2016. Now, all he has to do is convince tens of millions of Americans that a maverick and avowed socialist won’t take away their health insurance, destroy capitalism as we know it and put America on the path toward Marxism. Welcome to the party, man.