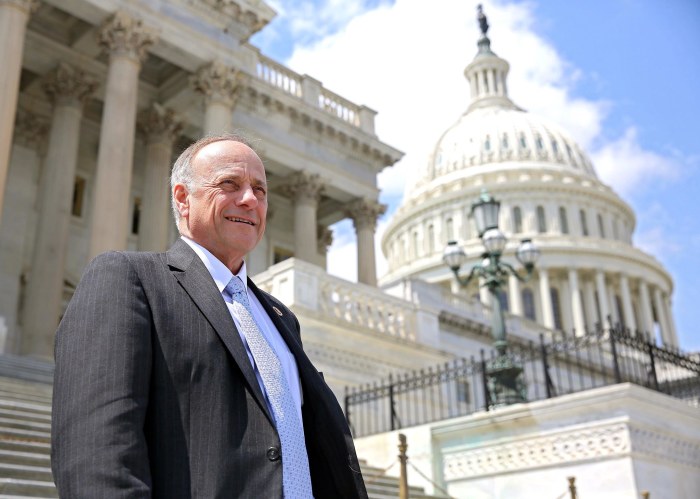 The U.S. House has fast-tracked a bill responding to the economic challenges created by the novel coronavirus (COVID-19) pandemic. All 223 Democrats present–including Iowa’s Representatives Abby Finkenauer (IA-01), Dave Loebsack (IA-02), and Cindy Axne (IA-03)–voted for the bill shortly before 1:00 am on March 14, joined by 140 Republicans (roll call). U.S. Representative Steve King (IA-04) was one of 40 House Republicans to vote no.

House Speaker Nancy Pelosi and Treasury Secretary Steven Mnuchin negotiated the deal over “at least 20 phone calls” on March 12 and 13. In a letter to House members, Pelosi wrote, “While we could have passed this bill on our own, I believe it was important for us to assure the American people that we can work together to manage this crisis.”

The House is monitoring [President Donald] Trump’s Twitter feed very closely – once he tweets his support for the Pelosi-Mnuchin coronavirus deal, GOP members are expected to embrace it. That means they can then pass it under suspension of the rules, meaning they’d fast track it to final passage.

Trump tweeted his support for the bill in the evening.

Key provisions of the legislation include:

The bill does not include a payroll tax cut Trump had wanted. Erica Werner, Mike DeBonis, Paul Kane, and Jeff Stein reported for the Washington Post,

Lawmakers in both parties have reacted coolly to the proposal, expressing qualms about its cost and the fact that it is not targeted to those directly affected by the pandemic. The legislation negotiated between Pelosi and Mnuchin did not include a payroll tax cut, and that omission emerged as one of the obstacles to reaching a deal.

[House Minority Leader Kevin] McCarthy said the payroll tax could be addressed down the road.

At this writing, King has not released a statement explaining his no vote or commented on the issue on his social media feeds. I will update this post as needed. UPDATE: King posted on Twitter on March 14 that he voted no because House members weren’t given time to read what they were voting on.

HR 6201 “Families First CoronaVirus Response Act” was finally posted at 12:01 this morning. Debate began at 12:10AM. Final passage vote was called at 12:28AM. No Member of Congress read the bill. Senate comes in on Monday and has about 60 hours “to find out what’s in it.”

“COVID-19 has already taken the lives of 41 Americans. Due to the lack of widespread testing, thousands more could already be infected. Experts say 200,000 to 1.7 million Americans could die. This is not hyperbole or overreaction. We need to meet the weight and seriousness of this pandemic with the full force of our government’s resources. This is the time for unwavering support of our workers, kids, and families. Yet, Steve King cast a vote against this bipartisan legislation that would provide free COVID-19 testing, paid leave, expanded food benefits and unemployment insurance, and protections for front-line health care workers. This is a shameful, selfish, and entitled vote.

“Rural America, especially Iowa, faces unique vulnerabilities to this public health crisis. Our population is older, sicker, and poorer. More people are uninsured and under-insured and lack access to healthcare and paid leave. Our few and far between hospitals and clinics could easily be overwhelmed by a large volume of patients. Steve King’s vote is a slap in the face to every single Iowan as he enjoys paid leave, health insurance, access to healthcare, and a six figure salary without sitting on a single committee.”

King did vote for a spending bill assembled earlier this month to address some needs related to the coronavirus. The House approved that legislation by 415 to 2 on March 4, and Iowa’s U.S. Senators Joni Ernst and Chuck Grassley joined all but one senator to send it to the president the following day. NPR’s Claudia Grisales summarized its main points:

The plan includes almost $7.8 billion in new funding combat the spread of the virus at the local, state, national and international levels, according to details from the panel.

The agreement also includes a provision to allow Medicare beneficiaries to access telehealth programs that will let them remotely see providers to assess symptoms potentially tied to the coronavirus.

“To protect public health, the bill will allow Medicare providers to extend telemedicine services to seniors regardless of where they live, at an estimated cost of $500 million,” House Speaker Nancy Pelosi said in a written statement.

The bill also allocates more $300 million to ensure that when a vaccine is developed — which some estimate could be a year or more away — that Americans will be able to access it regardless of their ability to pay, according to a congressional aide involved in the negotiators.

Overall, the plan allocates nearly $6.5 billion to the Department of Health and Human Services, which includes $2.2 billion for the Centers For Disease Control and Prevention to address state and local preparedness. The HHS figure also includes $3.1 billion to pay for new medical supplies such as masks at the Strategic National Stockpile and research into vaccines and therapeutics.