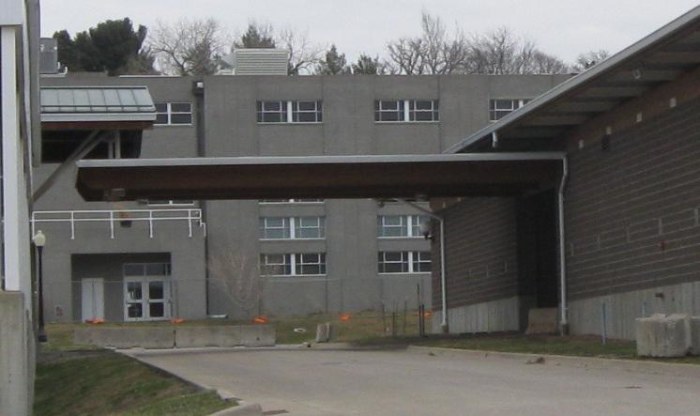 These plans were formalized after Polk County officials were briefed recently with World Health Organization estimates about the spread of COVID-19. If it gets a foothold in the metro area, as many as 34,000 central Iowans could fall ill, and perhaps 1,500 will need intensive care treatment, said Polk County Board of Supervisors Chair Matt McCoy. He repeated the call from local and state officials for people to stay home and avoid contacts that may spread the disease. McCoy said he and other leaders are confident the area's health care facilities can handle the challenge if the virus infections do not all occur at once.

The Oman Family Youth Inn, located on East 34th Street, a block east of the Cattle Barn, will house the homeless people. A temporary six-foot tall chain link fence has been erected around the 1940s art deco-style building, nicknamed the “Hilton.” East 35th Street behind the structure has been blocked by a concrete barrier and a check-point barrier set up on East 34th Street immediately in front of the dormitory.

McCoy told Bleeding Heartland on March 23 that Polk County officials rented the dormitory building on the fairgrounds for $8,000 per month in order to provide a place for an estimated seven to ten homeless people who may contract the virus, but who do not need hospitalization. No one who is homeless has yet been identified locally as having the virus. The facility will be staffed with a nurse, and security will be provided by the Iowa State Fair Police Department, he said.

“The county is doing this so that people who don't have homes will have the dignity of a place to recover if they contract the virus,” McCoy said. “The building is pretty big for what we need, but people will have a room and a shower, and medical care if they need it.” Homeless people who have more severe symptoms of the virus will be referred to the health care system for treatment, he said.

Polk County Supervisor Tom Hockensmith conducted a telephone meeting on March 22 to notify the Fairgrounds Neighborhood Association of the county's plans. McCoy stressed the temporary facility poses no danger to the public, and the fence around the building is a precautionary step, as much to keep people from wandering in, as wandering out.

The fairgrounds rental is one of several Polk County efforts to reduce the number of people living at the Central Iowa Shelter & Services (CISS) campus near downtown. Public health officials ordered the facility to reduce to less than 100 the number of people staying in the building. Polk County officials arranged temporary housing for 55 residents at a hotel and found permanent housing for 30 more residents.

Prior to Bleeding Heartland's interview with McCoy, Iowa State Fair Police Commander Doug Phillips would not say why a fence had been erected around the Youth Inn or what activities were occurring there. "If the fairgrounds were open to the pubic, and they needed to know, we would tell them," he said.

As for the fence, he speculated that the fair maintenance department may be doing some repair work at the building.  Even though the grounds are closed, some people may enter the fairgrounds property without authorization and the fence may be there to keep them from getting hurt, he said.

Before Polk County's Health Department announced plans for this project in a March 24 news release, Iowa State Fair Marketing Manager Mindy Williamson told Bleeding Heartland she didn't know what was happening at the Youth Inn. "I don't get to that part of the fairgrounds that often," she explained.

Williamson said the fairgrounds were closed last week “out of an abundance of caution” and that all events and activities on fairgrounds are canceled. Gates normally open for public access to the grounds are closed and locked. Poster-sized printed signs at the major gates to the fair notify the public of the closure. The East Grand Avenue gate was open to authorized vehicles over the weekend. Iowa State Fair police officers were posted at the gate, and signs on the Grand Concourse directed vehicles to the Youth Inn.

The gate signs indicate the closure was ordered by the Iowa State Fair Police Department. Commander Phillips said state fair police have the right to close the fairgrounds, which are not public property. He added that his responsibility is to keep the 75 employees working at the fairgrounds safe, and to minimize contact with members of the public who may carry the COVID-19 virus.

“There is no compelling reason for people to be on the grounds,” he said.

Editor's note: John Morrissey took all of the enclosed photos on March 22, standing on public rights of way outside Iowa State Fair property.

Do Not Enter sign posted at the East 33rd Street Gate to the fairgrounds: 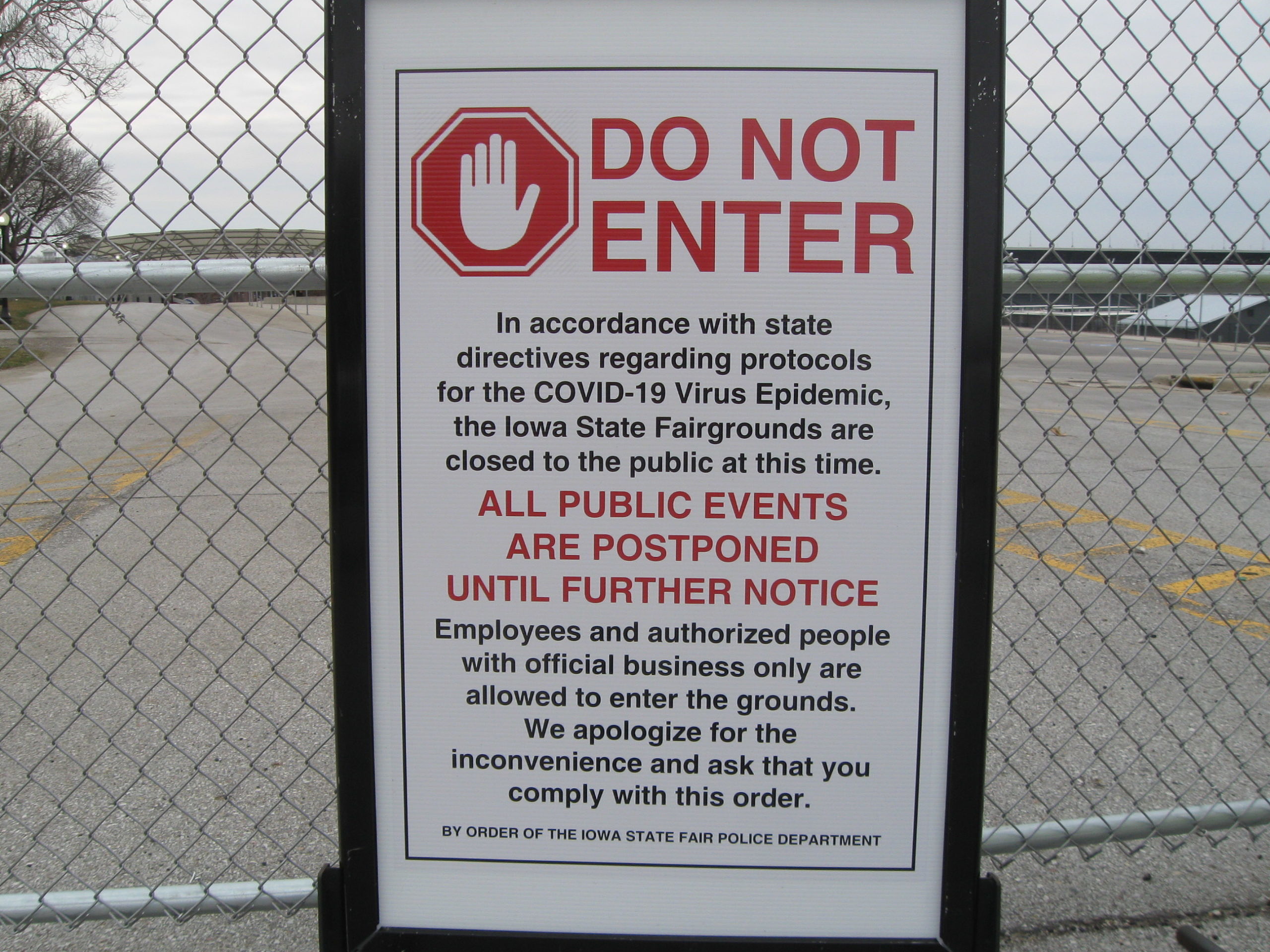 View from Dean Avenue, through the service lane between the Outdoor Arena and Stalling Barn. Note the fence along the south side of the Youth Inn, and the lane barricade: 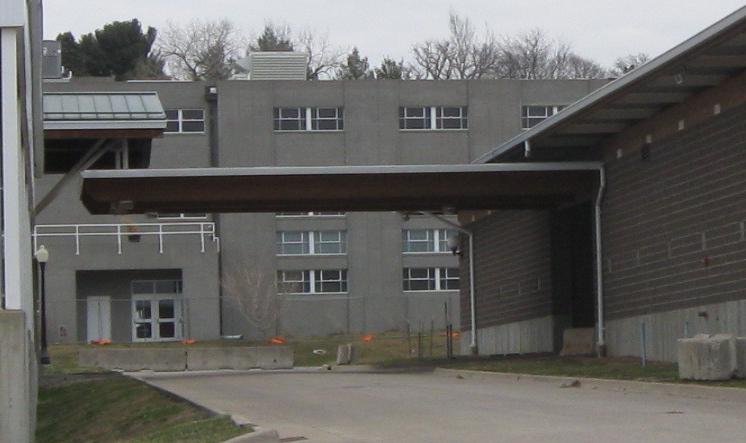 View from Dean Avenue to southeast corner of the Youth Inn. Note the chain link fence running along the south and east sides of the dormitory, and the street barricades: 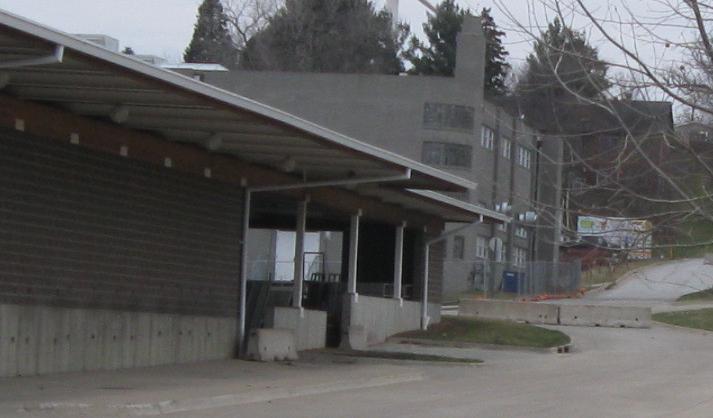