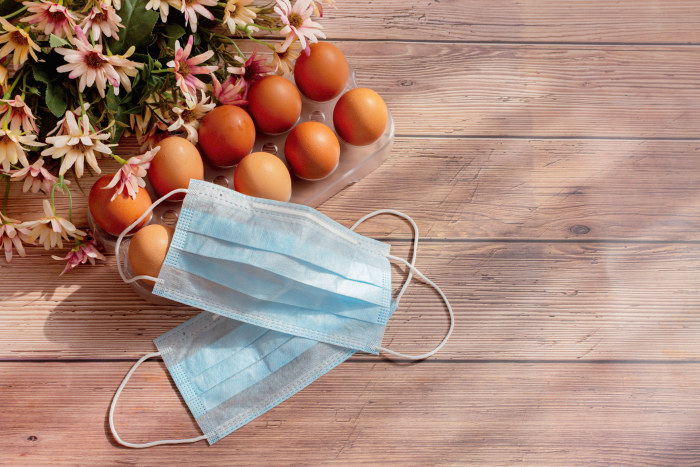 Celebrating Easter, Passover in a pandemic

Most Christians (aside from those in the Orthodox Church and Jehovah's Witnesses) are celebrating Easter today, and Jews all over the world are in the middle of the Passover festival. But the novel coronavirus (COVID-19) pandemic has disrupted holiday celebrations along with almost every other aspect of normal life.

Many Iowa houses of worship have adapted by live-streaming services or broadcasting them on radio frequencies congregants can hear from cars parked outside the building.

Fortunately, President Donald Trump backed off on his call last month to pack churches on Easter Sunday. But he has continued to offer mixed messages at his press briefings, speculating last weekend that perhaps churches should reopen for Palm Sunday or Easter.

Unlike some state leaders, Governor Kim Reynolds wisely made no exception for religious services in her order last month banning gatherings larger than ten people. During her April 8 news conference, she said she and her husband will see their daughters and grandchildren via Zoom rather than getting together like they would usually do for Easter.

Thousands of other Iowa families canceled plans to visit relatives as well. This past week, traffic at the Des Moines airport was 95 percent lower than the same week last year. Intercity rail and bus traffic is way down too, and the Iowa State Patrol has seen approximately 50 percent less traffic on Iowa roads, even though commercial traffic is running at typical levels. To replace public activities that have been called off, some parents with young children are organizing Easter egg hunts in their homes.

To my knowledge, no Iowa legislator has tried to undermine the governor's actions by encouraging churches or others to flout the ban on large gatherings. In an alternate timeline where Democrat Fred Hubbell led the state during this pandemic, I imagine some of our conservative GOP lawmakers would have sought to overturn an order limiting the size of Easter services, as their counterparts attempted in Kansas.

The Republicans representing Iowa in Congress have encouraged people to stick with the social distancing program. Senator Chuck Grassley posted on Twitter April 10,

Senator Joni Ernst posted on April 11, "This weekend will be tough for many in Iowa & across America. What is usually a time of family, fellowship, and celebration will instead be spent in social isolation by many. Reach out to your loved ones to offer your companionship & comfort during these tough times."

Representative Steve King has urged constituents to stay home and discouraged talk of reopening the country by Easter. (His contrarian streak has shown itself in other ways during the pandemic, though.)

A few Iowans with big megaphones have criticized government actions designed to slow the spread of COVID-19. Pastor Cary Gordon is a prominent voice in social conservative circles. His Cornerstone World Outreach church in Sioux City has complied with Reynolds' order by broadcasting services to parishioners in their cars in the church parking lot. But he has repeatedly used his Facebook page to denounce "the unnecessary obstacles created by a sinful state government."

Another COVID-19 denialist is Steve Deace, who was once Iowa's most popular talk radio host. He's been using his social media feeds to claim Americans should embrace God more and fear death less, instead of shutting down businesses to try to save lives. In an Easter-themed open letter to Trump, Deace called on the president to stop listening to "so-called experts who, at best, have failed you at several turns" and may have had bad intentions. "I humbly pray for you to have the strength to do what must be done to crush this panic, and call forth a future that starts with Amens and Hosannas today!"

Passover is usually a time for big family reunions and large community celebrations, so many Jews have felt a sense of loss this week. But synagogues have been live-streaming services, and many families have gathered virtually. Des Moines City Council member Josh Mandelbaum and relatives in six or seven states held a seder over Zoom. Iowa City Council member Janice Weiner took part in a Zoom seder at the Agudas Achim Synagogue in Coralville, where she has a leadership role.

One beloved Passover tradition is for the youngest child in attendance to read or chant four questions about the rituals. In Israel, at the suggestion of the defense minister, many families opened their windows at 8:30 pm on April 8 (the first night of Passover) so children could chant that part of the seder in unison.

Rabbi David Kaufman of Des Moines adapted "Next year in Jerusalem" (a refrain from Passover seders for many centuries) for his latest sermon: "Next year...Next year will be in person. Next year, we’ll be together at Seder again."

During a recent study session on video, Kaufman put a Talmudic teaching from at least eighteen centuries ago in a COVID-19 context. In those days, one of the rabbis taught, "be careful with a light commandment as with a grave one, for you did not know the reward for the fulfillment of the commandments." Kaufman noted that Jewish rules on hand-washing are a "lighter commandment" in comparison to the big ones like don't murder people. But not washing your hands in a pandemic could endanger you or someone you love or people you don't even know. So what seems like a small thing could become important in unpredictable ways.

Whether or not you celebrate any holidays this time of year, I hope everyone in the Bleeding Heartland community stays safe and healthy.

P.S.--Although Trump has said Easter is a "very special day" for him, he apparently doesn't know enough about Christianity to understand that you don't wish people a "HAPPY GOOD FRIDAY TO ALL!"

Speaking of well-meaning but misguided messages, the State Department wished Jews a Happy Passover in a tweet that inaccurately claimed matzah "is known as both the bread of faith and the bread of healing." Sorry, no, Rabbi Kaufman explained.