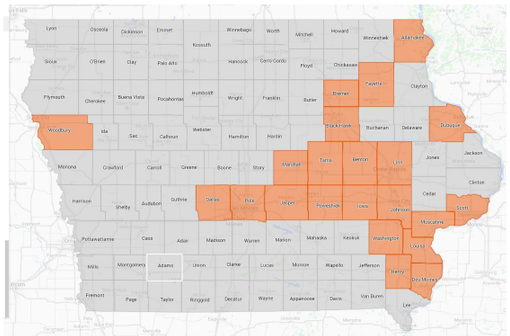 Richard Lindgren: Governor Kim Reynolds lost a good two months of time pretending that her state was immune from the virus when she could have been turning over rocks testing for emerging hot spots. -promoted by Laura Belin

I do not live in Iowa anymore, although I did spend a lot of my years in a very rural part of the state. I still have grandchildren in Iowa and I can’t help but watch with horror the slow-rolling disaster that is the “economic re-opening” of the state by Governor Kim Reynolds. It has brought from the deep recesses of my mind a classic short story written by Shirley Jackson, and I have realized that we are living this tale in real-time.

“The Lottery” was first published in 1948. During my youth, this work became a part of every American Literature curriculum. I confess that I neither understood the story nor grasped its importance until now.

Jackson’s fable confused me as a teen because the story seemed so implausible. This idyllic small town conducts a lottery every year to pick one citizen at random. Then the entire town population, from the little children on up, begins to stone to death the unfortunate “lottery winner.” With that gruesome act the story abruptly ends: “And then they were upon her.”

Our English teachers tried to explain the concept of the scapegoat to us, as well as the immorality of mindless conformity, but I remember that whole scenario as seeming just too silly to be taken seriously.

I have been writing a lot recently about the trend lines and probabilities that characterize this novel coronavirus and the resultant tragic deaths from the new disease called COVID-19. The exponential spread of this virus has at times seemed to have a power of its own. However, there is a huge difference between trying to quickly uncover “God’s coronavirus lottery picks” so that we can best direct our life-saving efforts versus what we are effectively doing in the re-opening plans of several “Red States.” [1]

In these states, the Republican establishment has apparently decided that a growing number of not-so-random deaths is quite acceptable, because the nation’s meat supply must be maintained at (quite literally) all costs. We even know who these virus victims are probabilistically most likely to be in Iowa. They work in your county’s meatpacking plants and they live in your community’s nursing homes.

Iowa’s governor literally said about these loosened restrictions, “Isn’t it a wonderful thing? Isn’t this great?” She has in effect said here, “Get out the stones.” Reynolds has moved this from a tragedy of the uncontrollable to the immorality of intentional harm.

In mid-April, the Trump administration released guidelines for economic re-openings based primarily on statistical success in addressing the COVID-19 numbers:

The guidelines recommend that states document a “downward trajectory” in cases of coronavirus and flu-like illnesses for two weeks before beginning a three-phase process to return to near normal work and social life. States should document another two weeks of declining cases before proceeding from one phase to another, the guidelines say, while a “rebound” in case numbers could mean reimposing some or all restrictions.

However, as I had written at Bleeding Heartland just days before that announcement, this plan would likely never work in states like Iowa or South Dakota that didn’t have a New York-like flood of cases to begin with. The math of coronavirus in these mostly rural states has looked more like the cruel randomness of the “active shooter,” with the virus finding targets in the grouped pockets of vulnerable people like immigrant slaughterhouse workers and nursing home residents.

The numbers of COVID-19 deaths in Iowa, both in absolute numbers and daily growth percentages, continue to rise rather than fall. [2] And because the state is mostly still testing known hot spots only, it is “looking for the lost keys only where the light shines the brightest.”

Those federal guidelines remain a long way from working in Iowa; even the Trump administration seems to be pretending that they were never issued. Since she could not meet the federal guidelines, Governor Reynolds has apparently decided that there are “magic wall” boundaries between her counties, and so she has opened 77 of the 99 counties (colored gray on this map) for business. 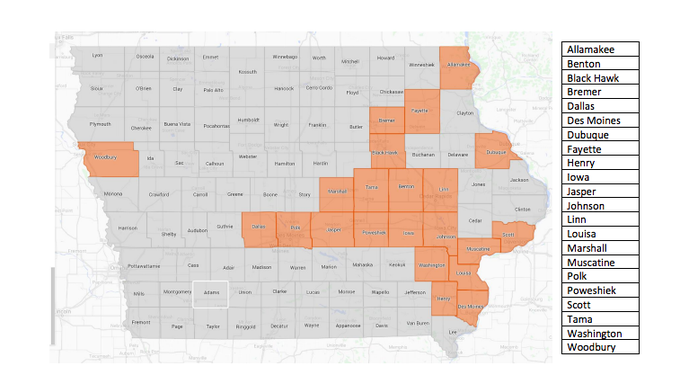 Reynolds recently signed a $26 million no-bid contract with a controversial and inexperienced Utah company to expand testing in the state. I have advocated that the state also needs to be aggressively shining a very bright testing light “where the symptoms ain’t” in order find the asymptomatic cases in the counties, health facilities and workplaces that officially report few cases right now. Because, I maintain, they do not have few cases. They are “the bullets that you don’t hear,” to use another analogy.

The governor lost a good two months of time pretending that her state was immune from the virus when she could have been turning over rocks testing for emerging hot spots.

My new home state of Florida is not doing any better. Until this week you still needed to go through many hoops in my county just to get tested. This usually included a doctor’s prescription, which you could not obtain without symptoms. Still, Governor Ron DeSantis, has pulled out the old (bad) joke about Florida being “God’s waiting room” to excuse the high number of deaths (1,268 to date), especially in elder-care facilities.

DeSantis even directed his state’s health department to exclude from the death count the “snowbirds,” those winter-only Florida residents (including many Iowans) who die while in the state. My spouse and I were snowbirds for about eight years before persistent problems with Iowa’s intentionally kneecapped ACA health insurance exchange expedited our full-time move, in order to solidify our health insurance coverage. Our family remains in the “very high risk” category with this virus.

There are ways to move back away from a jaded acceptance of virus death to active engagement. Workplaces, especially the meatpacking plants, must vigorously fight the spread of this virus. Reports indicate that the government is making only voluntary requests for improving worker safety in the meatpacking plants. Instead, we should mandate paid leave in order to keep the economically desperate employees from showing up to work while sick. We should require the state to pay lodging costs for sick workers to isolate them from their families in order to stop the spread. And of course, we need contact tracing and testing, testing, testing.

Morality is a collective societal attitude. Do we accept many more deaths, knowing probabilistically where they will be, or do we fight it? When you are losing billions of dollars of economic activity, then it is surely worth millions of dollars of testing and tracing efforts to actively root out this virus in every corner of the state before it takes many more lives.