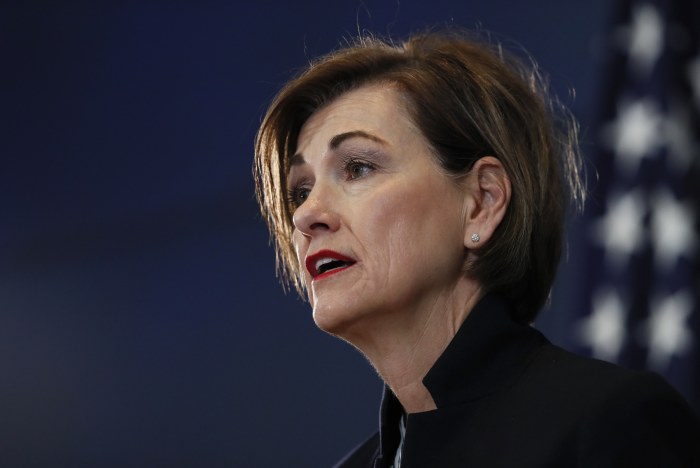 Days after announcing the Test Iowa program last month, Governor Kim Reynolds described the expanded capacity to test for coronavirus infections as a "significant advantage" for Iowa compared to other states, and a "tool that allows us to make evidence-based decisions about how to mitigate and manage the virus with precision."

The governor revealed on May 14 that only a few thousand Iowans had been tested for COVID-19 through a program that was supposed to provide 3,000 tests a day.

The state agreed to pay $26 million to Utah-based companies, which would run an online assessment and provide 540,000 COVID-19 tests, with a view to conducting 3,000 tests a day for six months. Reynolds repeatedly touted the program at her daily news conferences, saying she felt confident about loosening restrictions on some public activities because "we are now able to really drill down and look at the virus activity, from a state perspective, from a regional perspective, to a community perspective, and eventually, right down to the zip code."

That Test Iowa wasn't delivering anywhere close to 3,000 tests a day was obvious. Publicly available data showed total COVID-19 tests conducted by all sources in the state didn't reach the 3,000 mark on most days in late April and early May.

Reynolds said on May 1 that testing would accelerate quickly after a "backlog in the data entry process" was cleared. Then she promised the number of tests would increase once the State Hygienic Laboratory finished validating the equipment Nomi Health provided under the contract.

The governor delivered some good news at her May 14 press conference: the hygienic lab had completed the validation, finding the Test Iowa machines were 95 percent accurate in detecting COVID-19 in samples and 99.7 percent accurate in determining the subject was not carrying coronavirus. In addition, drive-through sites are already operational in Des Moines, Sioux City, Waterloo, Cedar Rapids, Davenport, Denison, and Ottumwa, with an eighth test site is set to open in Storm Lake on May 16.

The buried lede: more than 4,300 Iowans had been tested through the Test Iowa program, of whom 4,000 had received their results.

"WE'RE MOVING IN THE RIGHT DIRECTION"

Conducting 4,300 tests over 23 days is far below the promised 3,000 tests per day. Ryan Foley of the Associated Press asked Reynolds if she's been satisfied with the Utah companies' performance to date.

Yes, she has been.

Well I have, it's been three weeks. It has been three weeks since we literally announced that we had partnered with not only Nomi Health, but with the State Hygienic Lab. This has been a great partnership. It really has allowed us to get over 500,000 tests, to be able to process that, to really modernize the system, we've gone from--to really automate it--from handwritten to a QR code that allows us to populate the information, and we are continuing to enhance the process daily.

The data that we're receiving and that we're able to utilize and making the decisions is and has been incredibly helpful and certainly will be helpful as we really address COVID-19 for the long term.

So, you know, we've in three weeks, as I've said, we've stood up eight test Iowa sites. We've done eight strike teams. We've actually gone in and been able to work with manufacturing and processing facilities, and that's in conjunction with the State Hygienic Lab.

So, you know, I'm proud of the efforts. We've increased our testing by over 800 percent since, in two months. And so, you know, we're moving in the right direction. It takes some time to ramp up. Now that we have it validated, I think you're really going to continue to see us be able to build out what we have the capacity to do with bringing them on board.

It's understandable that a company with little experience in the public health field would need time to build up to conducting 3,000 COVID-19 tests per day.

But there was no excuse for Reynolds to continually oversell the scope of the Test Iowa program during its earliest days and weeks. She cited the supposedly voluminous data officials were receiving from across the state to justify lifting many mitigation policies in 77 counties, effective May 1.

She did the same thing again this week, when announcing her plans to let restaurants, gyms, salons, and many other kinds of businesses reopen statewide, effective May 15.

"The last two weeks, we have continued to monitor virus activity statewide and in the 22 counties where restrictions remained in place," Reynolds asserted on May 13. "And we've seen significant progress. The majority of these counties have achieved a significant downward trend in virus activity, and others have stabilized and are beginning to trend down."

How could she say that with such certainty, when Iowa is nowhere near the level of testing national experts say is needed to determine whether states are ready to reopen? Barbara Rodriguez reported for the Des Moines Register on May 12 that on two recent days, just eleven and nine people were tested at Test Iowa's drive-through site in Waterloo. The first two days the Cedar Rapids site was open, a total of 126 tests were administered. According to the Cedar Rapids Gazette, just 334 people were tested during the first four days the Linn County site was open.

Reynolds acknowledged during her May 13 media availability that COVID-19 is spreading in some counties, including Polk (Des Moines area) and Woodbury (Sioux City).

We're intentionally testing in those communities, which is driving positive case numbers up in the short term. But it's also allowing us to identify exactly where the virus is most active, track its spread and scope, and put measures in place to contain it, delivering the long-term results that we want and need.

What measures is she talking about? Not only is the governor not taking additional steps to contain coronavirus in Iowa's hot spots, she is relaxing some policies that were designed to slow the spread.

During the May 14 news conference, Caroline Cummings of Sinclair Broadcast Group noted concerns about the accuracy of Nomi Health's COVID-19 tests in Utah, as well as damaged samples and delayed or "inconclusive" results for some Iowans who used the drive-through sites. Would the governor commit to segregating the Test Iowa data, so the public can find out "what the $26 million contract is getting us?"

Reynolds said problems with samples were "not unique to Test Iowa--that happens with any testing process." Iowa officials learn more every day and will keep improving the process, she promised. She praised the State Hygienic Lab's efforts to validate Nomi Health's equipment, going "above and beyond to make sure" results would be accurate.

"We're going to continue to report out the numbers the way that we have," she said shortly before wrapping up.

Here's hoping Test Iowa lives up to the faith the governor has invested in it.

P.S.--Staff for the governor have not responded to Bleeding Heartland's inquiries about why Nomi Health sent some Iowans messages that could discourage them from seeking out a COVID-19 test. Readers who are willing to share communications received after completing Test Iowa's online assessment are encouraged to contact Laura Belin confidentially.