I have been an Iowan all my life, other than a two-year stint teaching English in Japan. I have lived in small towns like Grinnell, Pella, and Perry. I spent several years living in the city of Davenport, and I have lived in rural towns like Westside and Rippey (my hometown), as well as the farmhouse where my family currently resides.  I have been farming since 2006.

I have always paid fairly close attention to politics and government, and ran for the Iowa House in 2018.

Democrats have a (recent?) problem winning statewide elections. Zero for six in the past six races for governor or U.S. Senate. We know Democrats can win, and have won. Barack Obama did it a couple of times, and Rob Sand did it in 2018. Looking at my Iowa House district 47 results from 2018, one thing stood out to me that I believe is important and translates to winning any statewide race in Iowa.

Greene County would be considered more rural than Boone County.  When the New York Times recently shared COVID-19 data that reflected which counties had started “social distancing” (using cell phone travel data), Boone County was in the top five (i.e. reducing travel) of Iowa counties, and Greene County (same or increased travel)  was in the bottom five. Boone is a bedroom community to Iowa State University and is also the home to a DMACC campus.

Boone County 2018 general election results for various Democratic candidates from my back of the envelope, not officially recorded early returns:

Greene County 2018 general election results from my back of the envelope, not officially recorded early returns:

If you look at the one winner on this ballot, Rob Sand, you will notice that he had the least drop-off: 1.8 percent between Boone and Greene Counties. Hubbell had the steepest drop-off at 6.6 percent.

If you want to win statewide, you have to do “less bad” in the rural areas.

If you want to win a statewide race, you have to be more like Rob Sand. When I first sat down to write this, I wanted to chalk up Rob’s strong showing to good old-fashioned misogyny. But if you stop to think about it (and you should), the biggest slide from one county to the other was in Hubbell’s race for governor against Kim Reynolds. So while obviously gender can have a factor in a race, I don’t think that it did in this case.  Certainly, if it was simply misogyny, Hubbell’s numbers would have been just as good as Sand’s (Scholten, Weaver and Gannon were all running against male candidates, while Sand and Hubbell had female opponents).

One, I think Sand’s service in government stood out. Certainly having an article in the NY Times cracking a lottery case was how Mr. Sand was able to make a name for himself. His tenacity and smarts in solving the case exemplified what we hope from every public servant. Good government, efficient government, fiduciary responsible government, with absolutely zero overreach. A servant who accomplishes fair and just government by following and enforcing the law.

Second, I think that Sand’s critical thinking skills and experiences were up to the task. His computer coding from high school, as well as a law degree from the University of Iowa, most certainly are what enabled him to use his wits to be successful in the lottery case, as well as the many other cases that he worked on (securities fraud and theft by public officials being two mentioned in a New York Times profile of him).

Finally, I suspect that Rob’s “my first job was catching chickens” and “parade truck of Bucks” resonates with a lot of Iowans. Twenty percent of Iowa’s economy is connected to agriculture. It is hard to win a statewide race in Iowa without a pretty serious nod to farmers, agriculture, and the rural lifestyle. I have to think that Hubbell, even with his name recognition and business and financial success, suffered electorally in Greene County just because he was seen as a “city” guy and was unable to get the rural voter in his pocket.

I write this because I miss Tom Harkin and Tom Vilsack. Since 2008, Iowa Democrats have lost six races for governor or U.S. Senate.  We need to put up candidates who can win statewide in Iowa, and absolutely all evidence I have come across points to “holding your own” when it comes to rural Iowa.

It is why I think that the only candidate who can defeat Senator Joni Ernst is Admiral Michael Franken.

I have met each of the candidates and spoken to them. I have heard each of their stump speeches and watched the Iowa PBS debate in its entirety. Having been a candidate and had my name on the ballot, I tip my hat to each one of them. Eddie Mauro, Theresa Greenfield, and Kimberly Graham are great Democrats and we should be sure and thank each candidate for running and putting their name on the ballot.

I have seen the advice Tom Vilsack has shared and concur. Rural Iowa is an absolutely vital voting block to win a statewide race in Iowa.

Michael Franken is the only candidate on the Senate primary ballot not from Polk County. If you have talked to Mike, or seen family photos from his childhood or young adulthood, you know he is a rural Iowa kid. Chores and work and family kinda turn into the same thing. Lots of us who grew up on farms went through tough times. We also know how good we had it (often at the same time). If you are wondering how in the world a three-star admiral can be so humble, just remember, he’s an Iowa farm kid, and that never goes away. Mike knows rural.

Second, Mike is a scientist. Oh, he might not be a professional scientist, but spend an hour with him. He has a science background and he is a thinking, curious person who is always trying something on to see if it fits.  Testing ideas, asking questions, trying to figure out answers or solutions before he’s even got the exact question formulated. We need some fresh thinking in government, not politically correct talking points.

Third, the admiral hits a home run with his service. Nearly four decades of service in the United States Navy.  The Senate is the treaty and international arm of the United States Congress, and Mike has lived and served around the world. His experience on the ground and in combat theaters, as well as working with civilians and military leaders from other countries is tailor-made for his desire to continue to serve his country in the Senate.

My last comparison between Sand and Franken is this: they are both gentlemen in every sense of the word. Sand is considerate of others, and not at all afraid to apologize for any action or word(s) that he regrets. Franken is inclusive and considerate, an attentive listener and quick with a “thank you” and/or recognition of others’ service.

No one has asked me to write this opinion piece, and I did not reach out to Mr. Sand or Mr. Franken for permission to write any of this. Any errors are mine and mine alone.

Top image of Mike Franken cropped from his profile picture on Facebook. Photo of Rob Sand (left) with David Weaver provided by the author and published with permission. 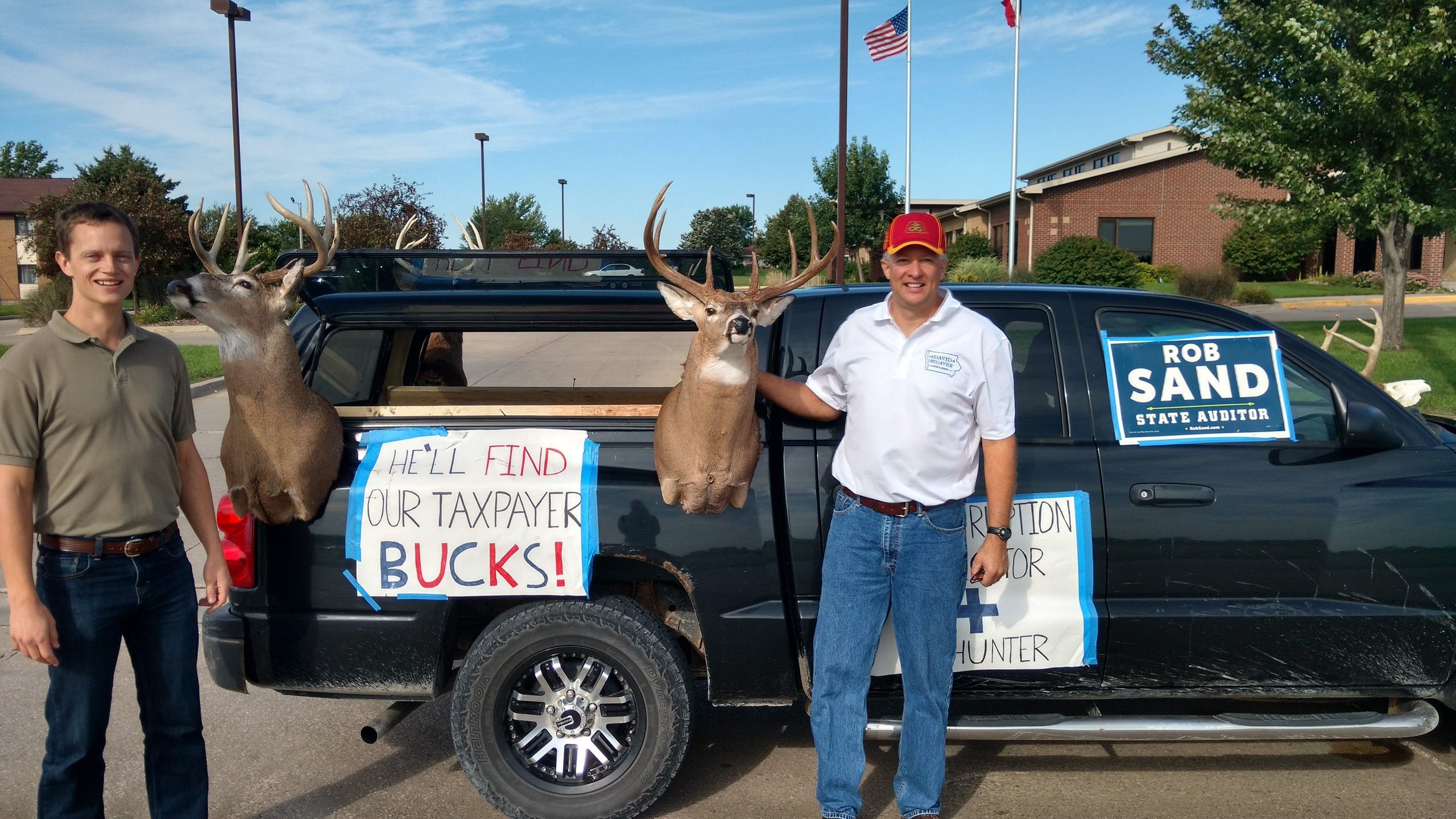