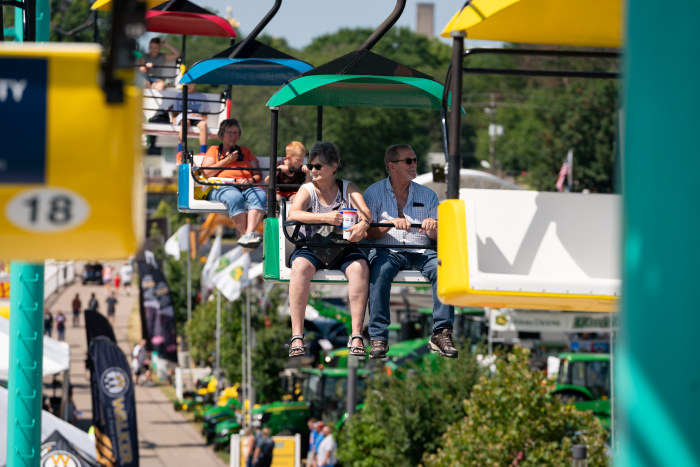 Randy Evans is executive director of the Iowa Freedom of Information Council. He can be reached at IowaFOICouncil@gmail.com. -promoted by Laura Belin

The decision last week to cancel the Iowa State Fair was a reminder of the seriousness of coronavirus and the consequences of many people’s anxiety about returning to activities that normally are an important part of Iowa life.

But the State Fair’s decision also illuminated an embarrassing disconnect from the norms of government transparency and accountability in our state.

I have attended government meetings for 50 years — from small-town city councils and school boards, to state boards and commissions. I have never seen or heard about a more outrageous abuse of the principle of open government than the State Fair Board exhibited last week.

The legislature and courts have been clear about the purpose of Iowa’s open meetings law.

The very first paragraph of the statute says,

This chapter seeks to assure, through a requirement of open meetings of governmental bodies, that the basis and rationale of governmental decisions, as well as those decisions themselves, are easily accessible to the people. Ambiguity in the construction or application of this chapter should be resolved in favor of openness.

The Iowa Supreme Court has provided its emphasis. The justices wrote in a 2016 case involving the Warren County Board of Supervisors’ deliberate circumventing of the law: “The open meetings law is intended to safeguard free and open democracy by ensuring the government does not unnecessarily conduct its business in secret.”

In spite of that guidance, the fair board acted more like a private club than a government board in making this decision. That conclusion comes through in details that should embarrass State Fair officials and Governor Kim Reynolds, whose lieutenant governor represents her on the board.

The fair board’s decision was the most consequential since World War II, when the fair was canceled. But this year’s cancellation came without the public being allowed to attend the meeting. It occurred with no discussion by any of the fourteen board members present. And it occurred with members voting by secret ballot.

Every Iowa school board, every city council, every county board of supervisors, and every other state government board makes decisions with a public vote in a public meeting after a public discussion.

It is outrageous the State Fair Board did not think citizens should be able to attend the meeting and listen to the discussions with State Fair administrators. A spokeswoman offered this feeble rationale for the secret ballot: the fair wanted to have a written record of the voting — as if a roll call vote listed in the official minutes of the meeting would not provide that record.

It was especially troubling that Assistant Attorney General Jeff Peterzalek attended the meeting but apparently did not advise State Fair officials ahead of time that the meeting must be open to the public, and that the vote of each board member must be made public during the meeting.

Whether the State Fair Board likes it or not, its meetings are open to the public unless one of a handful of exemptions contained in state law allows part of a meeting to be closed to spectators. Those same rules apply to other government boards and councils.

But the meeting notice sent by fair officials last week did not cite any of those exemptions for not allowing the public to attend. The notice also did not tell the public how they could listen to the meeting by audio conference or video conference.

I asked State Fair officials several weeks ago to be informed of the next fair board meeting. I received the meeting notice last week. But it included this statement, “The following meeting is open to credentialed members of the press.”

The media have no special rights of access under the open meetings law, but officials cannot restrict which reporters may attend. The law contains no mention of “credentialed” journalists. That is language Governor Reynolds and the Republican majorities in the Iowa legislature use to keep certain reporters from sitting on press row in legislative chambers and from attending Reynolds’ press conferences — events not covered by the open meetings law.

The State Fair is the largest single event in Iowa each year, drawing about 1 million people. Journalists from across the nation come to witness the wholesome spectacle that has been the subject of books and movies — and presidential campaigns.

Iowans have been waiting for weeks to learn whether the 2020 fair would go forward or would fall victim to public health concerns about coronavirus.

But Reynolds, Slater and fair board members dodged their responsibilities to Iowans under the spirit, if not the letter, of the open meetings law. Instead of discussing the arguments for and against holding the 2020 fair with the public listening in, and instead of having a public discussion of the pros and cons of various options for a scaled-back fair, those conversations occurred in private.

Attorney General Tom Miller’s staff now should take the lead in working with State Fair officials to better meet the fair’s obligations under the letter, as well as the spirit, of Iowa’s open meetings and public records laws.

The State Fair Board needs to begin posting notices and agendas for its meetings on its website. The minutes from past meetings should be posted there, too. Many state and local boards now do this routinely.

And as long as the coronavirus social-distancing recommendations remain in place, the fair board should allow the public to watch and listen to its meetings through Zoom or similar video-conferencing technology or by dialing in to listen on a conference line.

Other government bodies have been doing this. It’s time for the State Fair to do this, too.

Top photo taken from the Iowa State Fair’s gallery of images from the 2019 event.