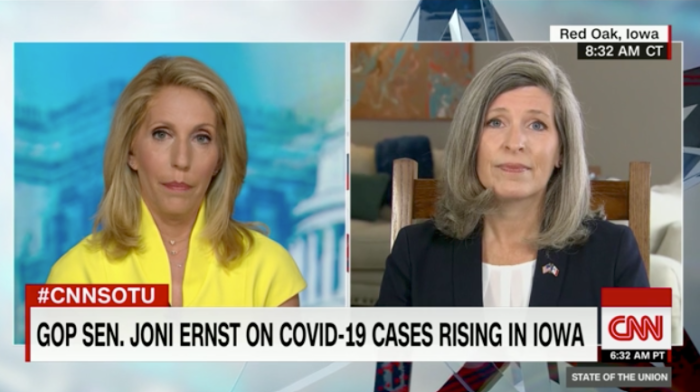 Joni Ernst's demagoguery on Ebola virus comes back to haunt her

It was painful to watch.

OK, Senator, let’s turn to the coronavirus crisis. Cases in your home state of Iowa have steadily risen for the last two weeks. You criticized President Obama in 2014 for his handling of the Ebola outbreak, saying that he showed — quote — “failed leadership.”

The transcript doesn’t do justice to the evasion on display, so watch the video:

“I think that the President is stepping forward,” GOP Sen. Joni Ernst says when asked if Pres. Trump is exhibiting “failed leadership” on coronavirus.

In 2014, Ernst had said that Pres. Obama had exhibited “failed leadership” in his handling of the Ebola outbreak #CNNSOTU pic.twitter.com/uVFVJ0HTua

While tap dancing around the question for about 45 seconds, Ernst mentioned one Iowan dying from COVID-19 in the past 24 hours. Bash tried again to get an answer.

So, given the fact that one person died there, that’s only half the number that died during Ebola, which you have said was failed leadership, is the president right now exhibiting failed leadership?

ERNST: Well, I — no, I think that the president is stepping forward.

And we have Vice President Mike Pence that is spearheading the task force efforts on the coronavirus, and so understanding where this came from, how it developed.

Of course, the pushback that we got from the Democrats when the president did try to shut down travel from some of those hot spots, it was an extremely difficult environment to operate.

And, you know, we know different today than we did at the beginning of the spread of the virus, and we should continually learn from those efforts and make sure that we are doing the right thing by moving our nation forward, simple things, wearing a mask, making sure that we’re washing our hands, but then, as federal government officials, making sure we’re moving at warp speed to get to that vaccination.

Changing the subject to Trump’s travel shutdowns is an idea Ernst pulled straight out of a GOP strategy memo. So is her first television commercial, launched on July 6, which touts her efforts to “move our supply chain back home and reduce our dependence on China.”

But everyone can see that, as my 14-year-old observed on Sunday, Trump’s doing about 65,000 times worse than Barack Obama on fighting pandemics.

Ernst is correct that we know more now about conditions that facilitate spread of COVI19. So why is Trump holding large rallies where there’s no social distancing and few people wear masks?

Ernst rightly observed, “this is a virus that is not going to go away soon.” So why is Trump still feeding into false hope that the virus may just disappear?

While some Republican senators have been trying to put some distance between themselves and a sinking president, Iowa’s junior senator seems incapable of even mildly criticizing Trump.

Extreme partisanship coupled with political cowardice is a bad look, especially in light of how quick Ernst was to fault the Obama administration’s largely successful response to the Ebola virus.

“We are seeing failed leadership from the congressman [and] from President Obama. We have seen the threat from Ebola for the past several months. And only today did they call a hearing to address the lack of leadership within departments out there.”

That wasn’t one offhand comment. Ernst repeatedly used the Ebola scare to feed a narrative about Obama’s alleged incompetence. Via the indispensable Wayback Machine, here’s the Ernst campaign’s news release from October 15, 2014:

Today, U.S. Republican Senate Nominee Joni Ernst issued the following statement in response to reports of Ebola cases in the United States. She called on President Obama to act in response:

“The Administration should have made Ebola a priority months ago, before the virus spread to the United States. With health care workers in the U.S. now suffering from Ebola, it’s clear the Administration and CDC have underestimated the threat this virus poses. Common sense dictates that we impose a temporary travel ban for civilians from countries that have high levels of infection while allowing for health care professionals and aid workers to continue their brave efforts to stop the spread in West Africa. We must also continue to increase health screenings at our international airports and implement standard protocols at hospitals across the country. It’s time for the Administration to get serious and do everything possible to make sure the Ebola virus does not spread further into the United States.”

“The Obama Administration needs to get serious about Ebola, but instead the President appointed a political operative as his czar. This is a serious public health crisis for America, not a political problem for the White House. If the President does not have confidence in his team, he should appoint public health experts who have the expertise and credibility to stop Ebola’s spread. The Obama Administration and Congressman Braley continue to be too reactive instead of proactive when it comes to Ebola.”

Now it’s Trump who has been “reactive instead of proactive,” ignoring advice from public health experts with deadly consequences for Americans. The federal government largely wasted February and the first half of March 2020 while Trump failed to take warnings about COVID-19 seriously.

Now it’s Trump who put a politician (Mike Pence) in charge of efforts to fight a pandemic.

Ernst has nothing to say about any of that. She’d rather run against “Communist China.”

UPDATE: Ty Rushing of the N’West Iowa Review asked Ernst about this issue when the senator visited Sheldon on July 8.

Ernst said she did not think Trump nor the White House failed in its coronavirus mitigation efforts and she elaborated on that thought while in Sheldon.

“Now, it turns out he was absolutely correct in doing so. He exhibited leadership when people were critical of him; President Obama didn’t shut down the country because he didn’t want people to be critical of him.”

Does Ernst expect people to believe that banning travel from some countries was an entirely sufficient federal response to the COVID-19 pandemic? There’s nothing more Trump could have or should have done to reduce the number of illnesses and deaths?

The failure to screen and test for COVID-19 in February and early March “squandered” our country’s “best chance of containing the virus’s spread,” costing thousands of lives.

Trump didn’t advocate social distancing until mid-March. The he encouraged governors to reopen businesses in early May, regardless of whether states were hitting benchmarks such as declining COVID-19 case numbers.

Even now, the president is not fully engaged in battling this public health thread. Yasmeen Abutaleb, Josh Dawsey, and Laurie McGinley reported for the Washington Post on July 11 that Trump has not consulted with Dr. Anthony Fauci, director of the National Institute of Allergy and Infectious Diseases, since early June.

Ernst keeps bringing up the travel ban, because Republican strategists believe that’s a good messaging strategy. The reality is that many lives could have been saved with a more competent federal response. Ernst’s inability to acknowledge that is painful to watch.