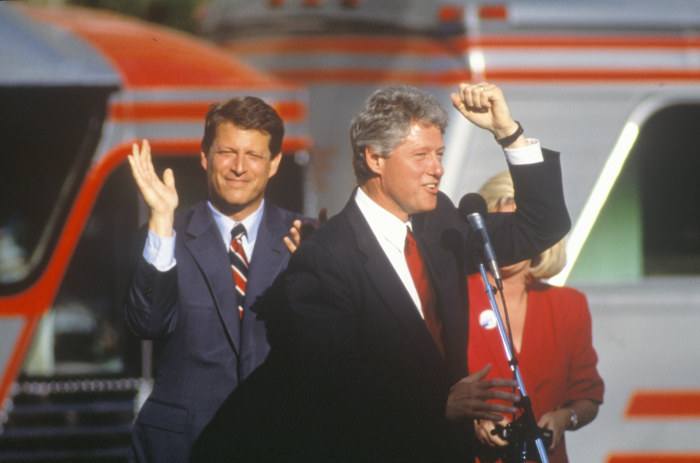 Vice presidential nominations have their biggest impact during the time between their nomination and the nominee’s acceptance speech. During that time, discussion about the running mate dominates. The problem is that VP picks are usually so close in time to conventions that it is impossible to disentangle the effects of just that nomination. But that has changed in the last 25 years.

Since 1968 there have been nineteen VP nominations.  Of those, twelve have been nominated before the convention began. Here is a summary of each, including the nomination’s effect on polling. 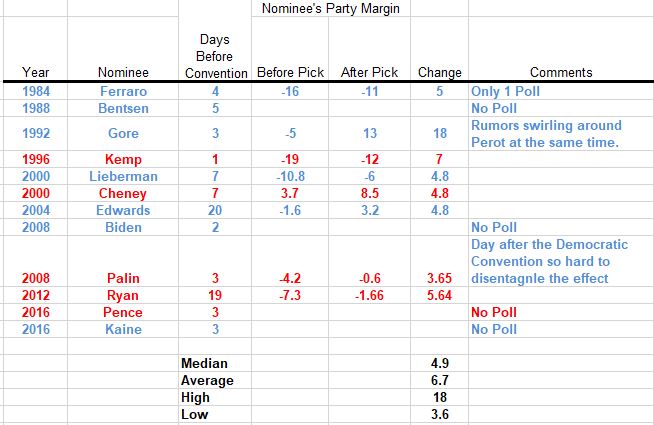 I will confess I am surprised by how large the effect is. The median bounce from naming a VP nominee is 4.9 percent, and the lowest it has ever been was 3.6 percent.

So the immediate effect of the announcement on the race is very real. In fact, it is almost as large as the bounce candidates receive from conventions. There are some caveats to this conclusion: the 1984 data is based on only one poll and that pollster (Gallup) was noisy that year. The Al Gore announcement in 1992 took place in the midst of a free-fall in independent Ross Perot’s campaign (he had briefly led the presidential race).

It is worth spending time on the Gore nomination. In many ways, that choice made little sense. Gore did not make Bill Clinton more competitive in a particular region. He did not bring experience that Clinton lacked.

The Gore nomination was thematic, designed to reinforce Clinton’s larger themes in 1992. One might say Gore represented the Clinton campaign’s doubling down on their message, rather than attempting to appeal to different groups within or outside the Democratic Party. It was in my opinion phenomenally successful. And the numbers show it.

I have little doubt that this history informed Biden’s thinking about Harris. Biden is not in danger of losing California. So why Harris?

Historically a candidate’s rapport with potential nominees has been decisive, and new reporting from Politico this morning suggests that was the case.

But perhaps more important, Harris allows Biden to make thematic contrasts with Trump. As I wrote here last month, George Floyd’s murder and Donald Trump’s subsequent handling of the event had a decisive impact on the race.

Biden’s biggest advantage over Trump is the perception that he can bring people together. I suspect the Harris nomination is designed to help him make that case more strongly.

It is clear that the VP selection can significantly affect the race. This is an important opportunity for Biden. As I wrote for this website in 2016, conventions are critical moments in a presidential campaign.

The Democrats have decided to hold a virtual convention. It is unclear to what extent people will watch a virtual convention, though I find it difficult to believe the audience will be very big. A key moment in any convention is the acceptance speech, and the fact that Biden’s speech will be virtual means it might be far less impactful than a typical acceptance speech. Vice presidential nominations are almost always important. In Biden’s case, I suspect it will be even more important than usual.

The table below updates my work from 2016 on convention bounces. Conventions have declined in importance from the days when there were only three television networks, which devoted their entire prime time programming to the convention. But the data shows they still matter. Races have absolutely turned because of them.

At this writing, it is unclear whether the Republicans will hold an in-person or virtual convention. Obviously incumbents do not name a new vice president, and as a result, there will be no similar drama to attract attention to the GOP convention.

Normally, that doesn’t matter: incumbents get about as big a bounce as challengers do out of conventions. The single biggest reason for this is the attention that the president’s acceptance speech gets on the final night. That event absolutely moves numbers. I suspect the Trump campaign knows this, and it is why I expect they will try to have the president give an in-person address if at all possible.

With Trump trailing Biden, and his job approval ratings suggesting a repeat of the election of 1980 may be in the offing, he needs the drama that comes from an acceptance speech.

One last point, and it is not a small one. You will note that the only convention where the party received a negative bounce was in 1972. That year, Senator George McGovern nominated Senator Thomas Eagleton for vice president. It later became known that Eagleton had received electric shock therapy for depression. Theodore White said that the Eagleton pick and the subsequent handling of it by McGovern, who would go on to withdraw the nomination, was the worst political blunder in U.S. history.

As Biden discussed his options, I guarantee that history was not far from his mind.

One might well say that when it comes to vice presidential nominations, the first rule is don’t screw it up.

The Harris announcement is designed to make sure he didn’t.