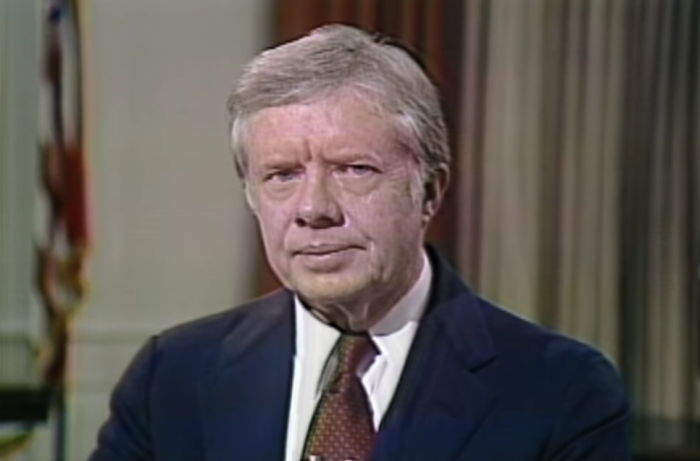 Dan Guild continues to explore parallels between this year's presidential campaign and what unfolded 40 years ago. -promoted by Laura Belin

I wrote in April that President Donald Trump was on the same path that led to the wholesale rejection of Jimmy Carter and the Democratic Party in 1980. With each passing day the similarities become stronger.

U.S. Senate seats once considered safe for Republicans, like Iowa’s, are now dead heats. States that shifted to the Republicans in 2016 (Pennsylvania, Iowa, Wisconsin, Michigan, Ohio) have moved decisively toward the Democrats. Texas is in play, and this week saw a very good pollster find Joe Biden with a 13-point lead in Pennsylvania.

Two enormous events--the Black Lives Matter protests and the COVID-19 crisis--have upended American politics, just as an oil crisis and a hostage crisis upended politics in 1980. Events seem out of control, as they did in 1980, and like then, the president seems completely out of his depth.

One way to gauge the public’s perception of how people answer the right direction/wrong track question. This graph is taken from Real Clear Politics. In general, the numbers were stable though trending downward somewhat. After George Floyd was killed on May 25, protests erupted all over the country. You can see the sharp reaction. 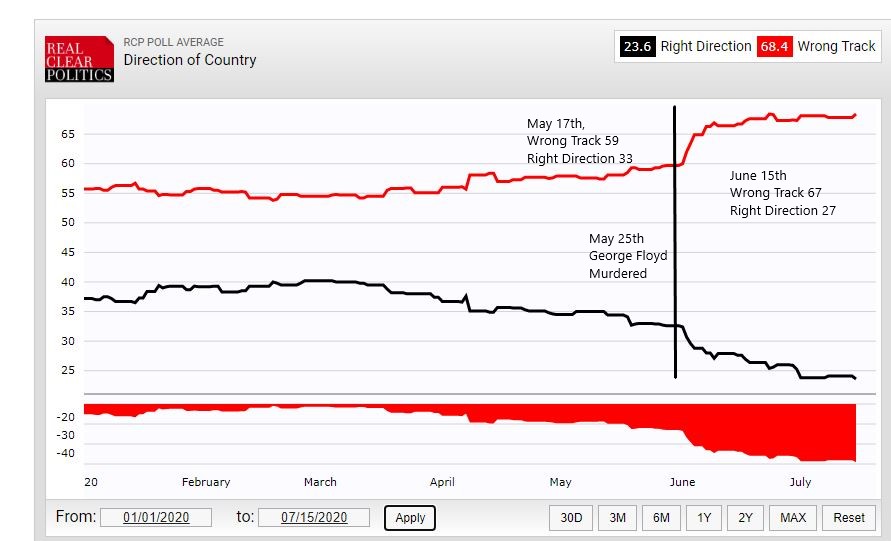 This table shows the results on both the trial heats and Trump’s job approval.

The Floyd killing and Trump’s reaction to it created a 14-point swing in the right track/wrong direction question and a 7.5-point swing in his job approval. Events like this are rare. History tells us that when they happen, an incumbent seldom recovers.

It is hard to overstate the importance of these numbers. In order to win, Trump must convert people who strongly disagree with his current job approval.

There are events that define politicians. For Carter is was the oil crisis and the hostage crisis. For George W. Bush it was Katrina. For George H.W. Bush it was a recession. For Trump it looks like the second COVID-19 spike and his handling of Black Lives Matter are defining him, which becomes apparent when you look more closely at the approval polling:

I doubt any president, except perhaps for Lyndon Johnson, has ever had a positive approval rating on the economy and been so broadly unpopular. It speaks, I think, to how badly Trump has misread the political moment. His instincts are to polarize in a moment when the electorate wants the opposite.

The best evidence I can find of just how big this political price might be was in the recent New York Times/Siena polling of six battleground states. I went to more than 20 Democratic presidential candidate events in New Hampshire. The one question that was asked in every event was some version of “How can you bring people together?"

This issue, more than any other, poses the greatest threat to Trump’s re-election. There is a sense in the country that we are divided. Trump’s reaction to the George Floyd killing played right into that perception.

Ironically it is Trump's own narcissism, his own inability to understand that a critical part of being president is to bring people together, which caused his downfall. It is difficult to see how he can reverse it.

Top image: Screen shot from a video of President Jimmy Carter's farewell address in 1981, posted on YouTube by The Carter Center.