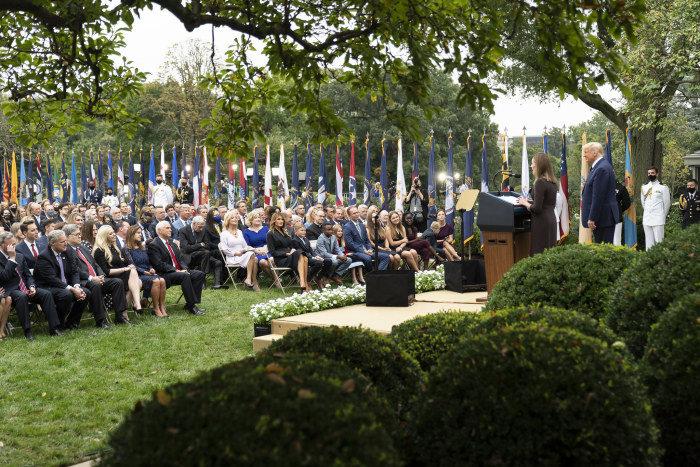 Our moral makeup is really being tested this week. First, it was the prospect of forgiving during this season of atonement. Now, it’s whether we should feel sorry for someone who crashed to earth after jumping out of a plane while refusing to wear a parachute.

Mixed feelings are flowing like Clorox following the White House announcement that President Donald Trump has tested positive for COVID-19. The past 72 hours can be summed up in three words: “apparently,” “schadenfreude,” and “hubris.”

First, a confession. For the past eight months, since Trump has played down the coronavirus pandemic, lied about its severity, refused to urge mask wearing and asserted that he wasn’t concerned about getting sick, I have been reminded how the opening number of A Chorus Line could be reimagined: “God I hope he gets it … I hope he gets it …”

This is disturbing because I have never wished ill thoughts upon anyone whose politics I disagree with.

I wasn’t a fan of Ronald Reagan, but I felt sorry for him and his family when he was shot in 1981 and when I learned he had Alzheimer’s. I prayed for John McCain to beat his cancer diagnosis. And had I been far older than 9 months when Dwight Eisenhower was felled by a heart attack in 1955,  I would have wished for his speedy recovery as well.

But those war hawks, civil rights resisters, and wealth inequality champions had one thing in common that Donald J. Trump does not share: They didn’t ask for what happened to them. By completely denying the caution of the world’s health experts, urging all Americans to do the same, and otherwise continually flouting COVID’s reality, Trump has been daring the fates to hit him with their best shot.

The word for this is hubris, which Webster’s defines as “exaggerated pride or self-confidence.” A RAND Corporation analysis of foreign leaders predicted that hubris in a world leader would lead to a “nemesis” complex — “a vengeful desire to confront, defeat, humiliate, and punish an adversary …” Though the analysis gave as examples Fidel Castro, Saddam Hussein, and Slobodan Milosevic, that description fits Trump to a T.

But even god-kings can inspire sympathy. Good wishes, thoughts and prayers came Trump’s way from Joe and Jill Biden, Barack and Michelle Obama, Hillary and Bill Clinton and many other of Trump’s “radical left … anarchists … agitators.” And most people realize that anytime the leader of the most powerful military nation on earth is impaired, the entire world is endangered. And yet …

Many responded not with sympathy but with schadenfreude — delighting in others’ troubles. Hu Xijin, the editor of the Chinese government Global Times newspaper, tweeted, “President Trump and the first lady have paid the price for his gamble to play down the COVID-19.”

Before you gasp in horror, are you truly surprised? This is, after all, the president who wallows in “fake news” and “alternative facts.” That last Orwellian term was promulgated by Kellyanne Conway, who has also tested positive.

GOP bigwig Tim Miller told The New York Times it makes sense that the reported news was met with less than total sorrow, considering that Trump has made a career out of belittling those he feels superior to. “Donald Trump’s whole reason for being within the Republican Party was he was going to be the meanest to the liberals, meanest to the media, meanest to the people that you hate,” Miller said.

Which brings us to the third stool of our word triad: “apparent/reported/supposed” and all their derivations.

Even as we were told Trump lay in a Walter Reed hospital bed, the administration was still obfuscating. Around noon Saturday, the Times reported how White House physician Dr. Sean Conley was opaque about when Trump was reportedly diagnosed, whether he was on or had been taking oxygen, and myriad other questions.

The Washington Post columnist Margaret Sullivan summed up what everyone, not just journalists, who are trained to radiate healthy skepticism, should have learned after three and half years of Trump’s lies, fabrications, misleadings and untruths.

“[W]hat we really need right now is an entirely credible, fact-based voice from the White House,” Sullivan wrote. “Good luck with that. … With the exception of Anthony S. Fauci, and maybe a few other top medical experts, there isn’t a trusted truth-teller in sight.”

So, if you feel compelled to don a mask of Trump-ward thoughts and prayers to conceal your snickering, you’ve got plenty of company. Sullivan concluded,

Once upon a time, when a president or his press secretary made a statement on a crucially important matter, it was simply considered news. And reported as such. The time for that is long past. The stakes are higher than ever, and the demand for proof should be, too. Otherwise, Americans will reasonably come to an unavoidable conclusion: If the statement is from the president’s tweet, or from the press secretary’s mouth, there’s no reason to think it’s true.

Apparently, there’s a great deal of schadenfreude connected with his hubris.