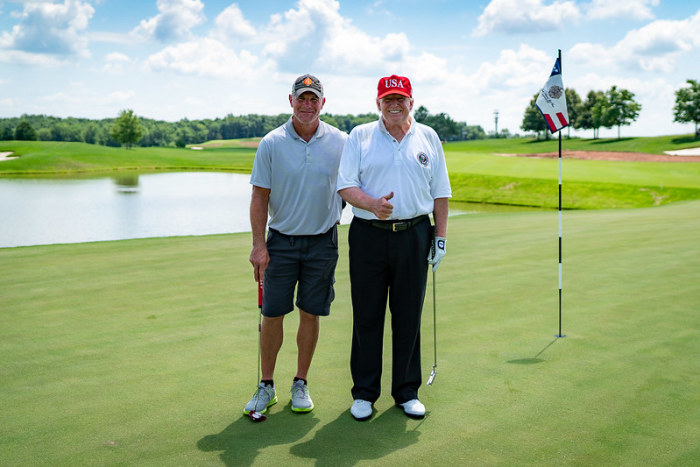 Richard Lindgren: "When I run the numbers, Donald Trump appears to own, to use a phrase a business colleague described him with in the 1990s Atlantic City era, a 'zero-billion-dollar business.'" -promoted by Laura Belin

Ever since I began my own blog in January of 2018, Donald Trump's "not-normal" finances have been in my head and have been discussed numerous times. Now that the media frenzy over his Covid diagnosis has abated somewhat, perhaps we can get back to Trump's financial frauds. In light of the recent excellent reporting from the New York Times and others, this is a look back at what I got right and what I got wrong in some early posts about Trump's wealth and taxes.

In April 2018, I posted a four-part series on the mathematics behind Donald Trump's real estate business. Any accountant familiar with the story knew back then that Trump likely paid very little in taxes in many past years. Indeed, Hillary Clinton said so in one of their debates, to which Trump bragged, "That's because I am smart."

In that series I noted that there are parts of the Trump business model that do legally shelter large amounts of income from tax. Just about every major real estate development, in its early years, is purposely set up to show an "accounting loss" but also generate a positive cashflow at the same time. This is possible because of generous commercial property depreciation deductions, even while property values are increasing, and other (far too generous) tax credits and deductions that real estate developers get to employ. Being able to write off the interest on large amounts of debt is a prime example here.

This results in a property that looks like it is losing money, but, when you dig past the tax returns, that same property often really generates sizable amounts spendable cash. Private investors use these "tax losses" to shelter other income, and everybody is happy except the government, who loses out on substantial tax revenue.

The "legality" problems come when you push those deductions and credits from the fuzzy world of tax avoidance into the criminal world of tax evasion. My father, who was a tax accountant, told me one time that he always knew the difference between the two when working with clients. While I trust that my father did, Donald Trump clearly has not earned that trust. The Times article cites excessive deductions ranging from $70,000 worth of hair care, to large "double dip" consulting fees paid to his children, and to alleged improper business deductions for family homes. Former Trump attorney Michael Cohen has also testified to the manipulation of property values, written down for tax purposes and up for bank collateral, which is illegal.

But you still need positive cashflow

The Times article and other sources have noted that many Trump properties, especially his golf courses, are bleeding cash at prodigious rates. The primary cashflows coming into the organization in the last few years appear to have been not from real estate, but rather from royalties from the licensing of the Trump name, payments for "The Apprentice" television appearances, and a $72 million tax refund that is still in dispute with the IRS (and is possibly fraudulent).

Any positive cashflows from property developments appear to come, not from his own properties, but rather from properties that he does not operate. The excellent WNYC podcast Trump, Inc. detailed some of these properties, in which Trump owns a minority stake, but which appear to generate positive cashflows for him in absentia. In one of these cases, the government of Qatar appears to be leasing a very expensive office suite that sits empty.

The Times series also notes that Donald Trump has appeared to have lost more money in many past years than any other individual taxpayer in the country. If you lose that much money, you do have some legal exemptions from paying taxes, but that certainly does not comport with the myth of Trump as a successful property developer. (Hint: he is not.)

As for my own reporting, I appear to have severely underestimated how bad the cashflows from Trump's properties really are. I mean, how can so many other rich property developers quietly rake in large sums of cash while paying low taxes, but Trump cannot get the basic accounting math to balance?

My second dive into Trump real estate poked around the fishy lack of information about collateral or liens on Trump properties. When you or I, or even normal big-time property developers, borrow a lot of money to purchase a property, the lender insists on recording the mortgage (from the Latin "death pledge") with local authorities in case we fail to make payments and they need to seek recourse in the courts.

Indeed, commercial real estate development typically does not make financial sense unless you are using large mortgage loans to leverage your purchasing power and to maximize tax deductions. However, when there are Eastern European oligarchs and the Iranian Revolutionary Guard apparently financing your hotels, there are likely to be liens that are "otherwise recorded" outside of official records, and enforced through "alternative arrangements." We still do not know the size of these liens and how they have been enforced.

In that earlier writing, I had missed a lot of the funny money business going on with Trump's golf course purchases in Scotland and Ireland. The New Yorker's Adam Davidson has been relentless in "following the cash" through these Trump Organization entities. Not only are they bleeding money (which we know because disclosure requirements to U.K. and Irish tax authorities are more public than those to U.S. jurisdictions), but millions of dollars seems to be going into these properties and yet not coming out in any form. Where is the money going? Disclosure of those transactions cannot be good for the Trump Organization. We can only hope to see some of this come to the light of day in future years.

A new Bonfire of the Vanities

In May 2018, I likened Donald Trump to Sherman McCoy, the protagonist of Thomas Wolfe's great 1987 novel Bonfire of the Vanities. McCoy was a not-rich-enough New York wannabe who crashed in spectacular fashion. McCoy had to resort to "creative financing" to support his too-lavish lifestyle. In a similar manner, the Trump Organization could no longer raise money in conventional business forms after their Atlantic City casino debacle.

In that post I noted that the Trump Organization's 500-ish business entities were constructed more like Enron than a "normally complex" business. These limited partnerships and LLCs are set up mostly to wall off identifiable collateral so that the collapse of one project does not take down the whole bunch. But, as the bombshell New York Times series details, this structure is starting to fall apart into an unmanageable mess of negative cashflows and likely-defaulting loans.

Donald Trump appears to have personally guaranteed over $400 million in loans to keep the cashflow going for his sinking properties. The whole point of the "real" part of commercial real estate development is that you never put your own wealth on the line. Your "real" properties are your financial backstop if you go under. But apparently Trump could not mortgage his properties any further, which brings us back to the collateral issues noted above. Somebody else must have "first dibs" on these properties that he claims to own.

The present value of Trump

One of my favorite classes to teach in my academic career was the accounting topic of valuation. How do accountants, buyers and tax authorities put a dollar value on properties and business ventures? There is some art here, but also a lot of basic math. The economic value today of just about any asset is the mathematical present value of the after-tax cashflows you expect to receive from the investment in the future.

The present value mathematical calculation is quite straightforward. The key factors are (1) the size of any future cashflows, (2) the timing of those flows, and (3) the discount rate, which is basically the rate of return you should be able to receive on another investment of equal risk (also called the opportunity cost). The higher the risk, then the higher the discount rate, and then mathematically the lower the present value of the investment will be. [1]

The magazines Forbes and Fortune use different methods to estimate the net worth of the über-rich. Donald Trump was able to snow their editors for years to inflate their estimates of his wealth. But when I run the numbers, Donald Trump appears to own, to use a phrase a business colleague described him with in the 1990s Atlantic City era, a "zero-billion-dollar business."