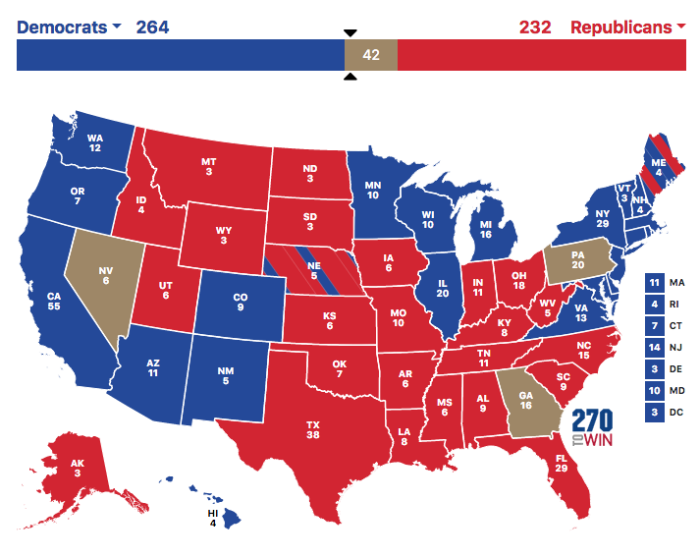 No matter how this election turns out, two things are certain:

1. Polling remains hopelessly flawed. The “Bradley effect” took hold once again, as it did in 2016. The theory is named after former Los Angeles Mayor Tom Bradley, who lost the California governor’s race in 1982 despite hugely favorable pre-Election Day polling numbers. Reason: people tell pollsters what they want to hear instead of the perhaps socially unacceptable truth — like they beat their wives, smoke cigarettes or intend to vote for Donald Trump. And pollsters have never been able to account for that.

2. As in 2016, the election was about racism. It’s always about racism. Trumped-up warnings of “Black rioters descending on suburbia” carried the day with white voters. When all the votes are counted — if they are allowed to be — we are almost certain to see Trump winning a sizable plurality of white voters if not a majority, which has happened in every single election since 1964.

Isabel Wilkerson, a Pulitzer Prize-winning author and former New York Times reporter, believes it’s more than just racism — she believes America from its outset has been constructed around a social caste system, similar to India’s but less formally coded. The lowest caste, she writes, is occupied by Black people regardless of their economic, cultural or educational status. And, she says, the prospect of America becoming a “majority minority” nation by 2042 has utterly possessed whites, who are terrified of losing their status as being above America’s “untouchables.”

As Wilkerson writes in her seminal book Caste, The Origins of Our Discontents, which every Democrat should read (on page 327):

Caste gives insights, too, into the Democrats’ wistful yearning for white working-class voters that they believe should respond in higher numbers to their kitchen table appeals. Why, some people on the left kept asking, why, oh, why, were these people voting against their own interests? The questioners on the left were unseeing and yet so certain. What they had not considered was that the people voting this way were, in fact, voting their interests. Maintaining the caste system as it had always been was in their interest. And some were willing to accept short-term discomfort, forgo health insurance, risk contamination of the water and air, and even die to protect their long-term interest in the hierarchy as they had known it.